Have you ever wondered where some of today’s common wedding traditions originate? Why do brides wear a veil or carry a bouquet? Luckily for you, Personal Creations compiled a list of 16 popular wedding traditions to answer all of your burning bridal questions.

Did you know that bridesmaids were chosen to stand next to the bride to confuse evil spirits in ancient Rome? Find out the significance behind wedding cake and having bridesmaids. 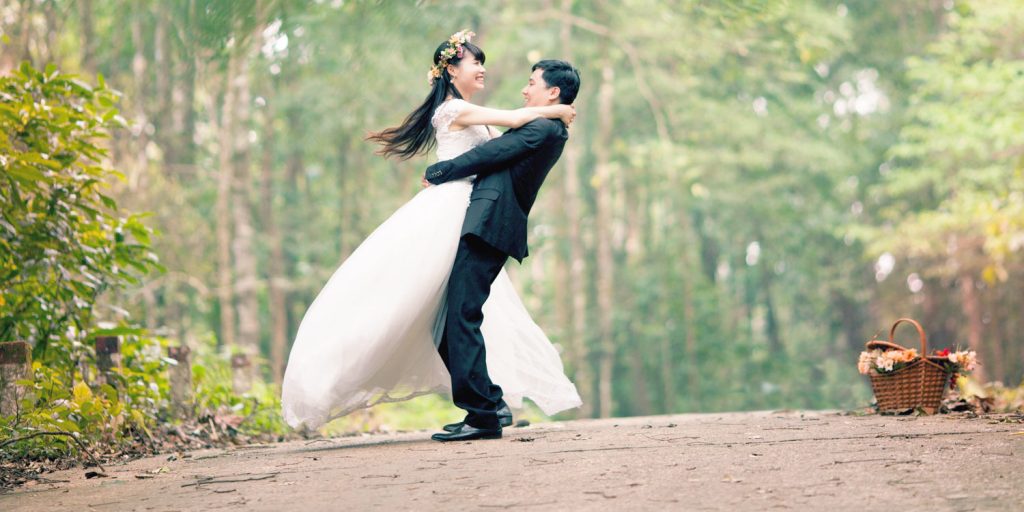 1. The Origin of Marriage 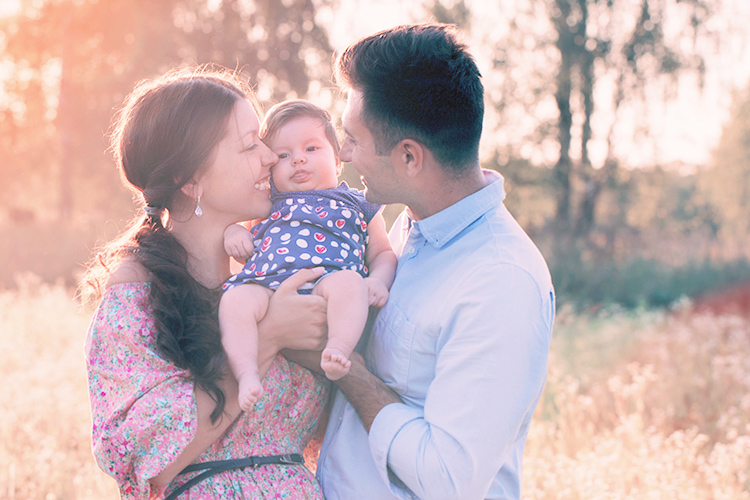 The origin of marriage dates back to 23,000 years ago when hunter-gatherers became farmers, and gender roles around the household started to form. Males became responsible for gathering food, while females stayed at home to rear children. Thus, marriage soon became necessary as a way to ensure the survival of their offspring. 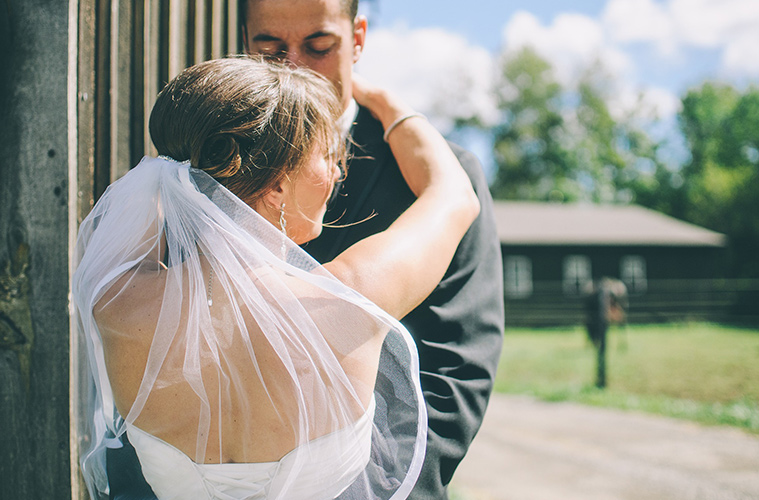 This wedding tradition dates back to the origin of arranged marriages. Traditionally, the groom’s family would not allow him to see his bride until the wedding. This is because if he didn’t like her looks, there was a chance that he might not agree to marry her. Therefore, the veil was used to conceal the bride’s appearance up until the very moment in which they were to be married.

3. Cans Tied to the Bumper 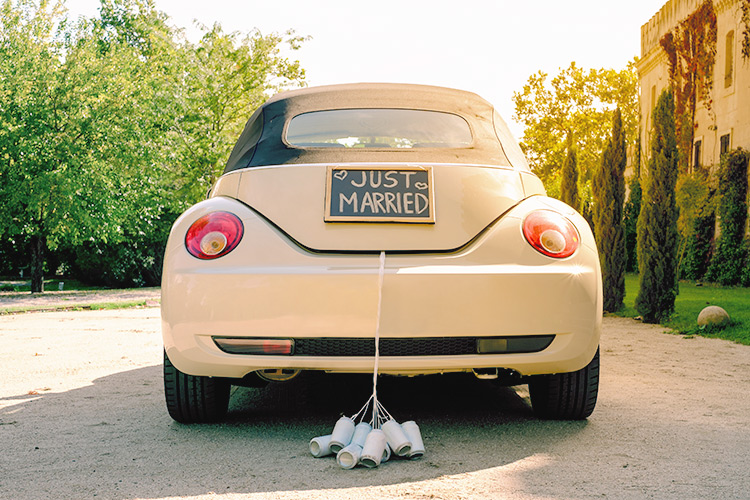 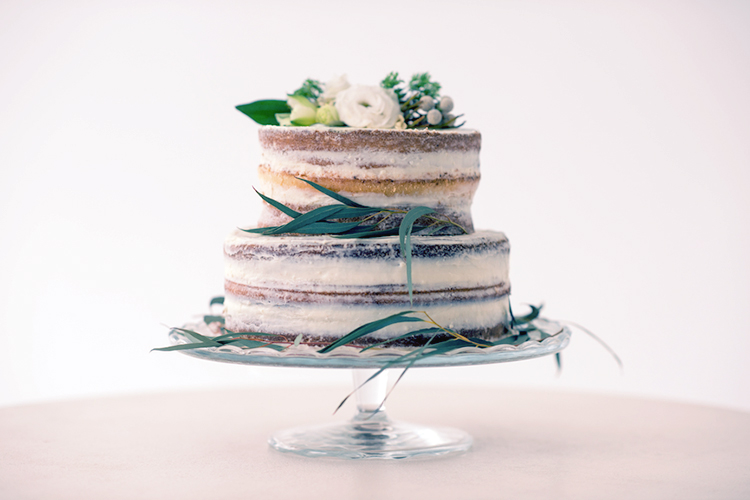 Since cakes represent fertility, Ancient Romans would bake wheat cakes and break them over the bride’s head. Soon it became customary to stack these wheat cakes one on top of the another, as tall as they could go. The bride and groom were challenged to kiss over the tower without knocking it over. If successful, they’d enjoy a lifetime of good fortune as a couple. 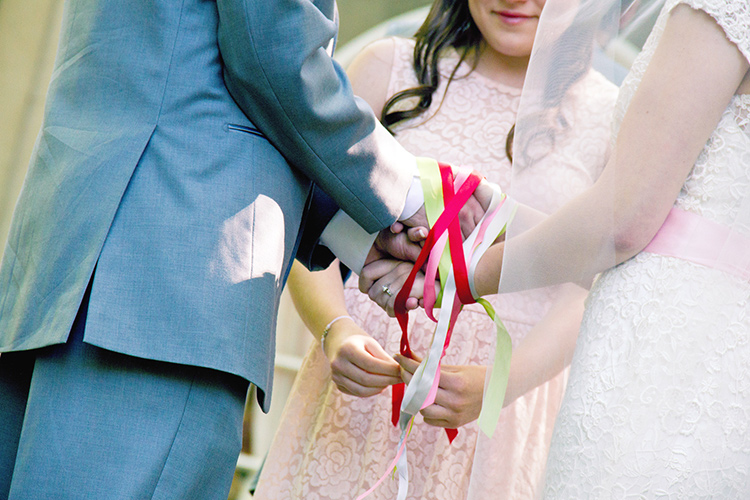 During the Roman age, a common custom was to tie the bride and groom’s hands together during the ceremony. The couple could not be released until the marriage was official. This is a tradition that’s referred to as “handfasting”, and is a common practice amongst various cultures around the world. 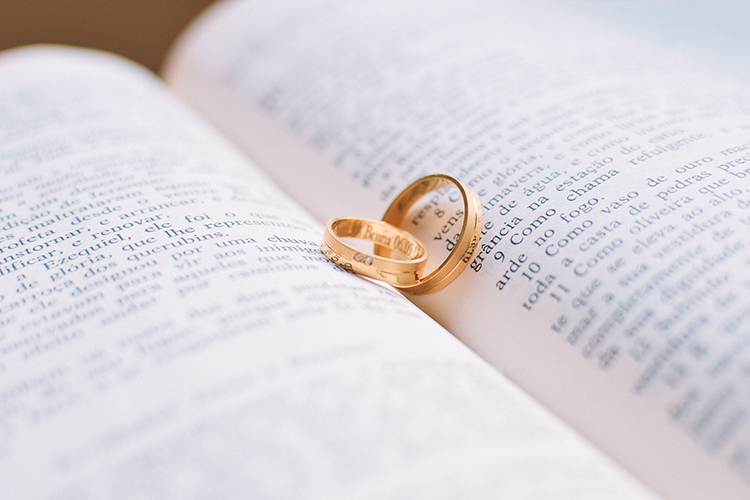 The circle represents eternity, because it doesn’t have a beginning or an end. During ancient times, women would wear rings made of papyrus around their wrists and ankles. Romans then began to substitute the material with iron, which ultimately led to the use of gold to make the first betrothal rings. The tradition of a diamond engagement ring was started by Archduke Maximilian of Austria when he proposed to Mary of Burgundy. Like circles, diamonds have long been considered as symbols of eternity because they are the hardest gems on earth. The placement of the ring on the fourth finger came from the Egyptians who believed that it was the finger that contained the vein that connects to the heart. 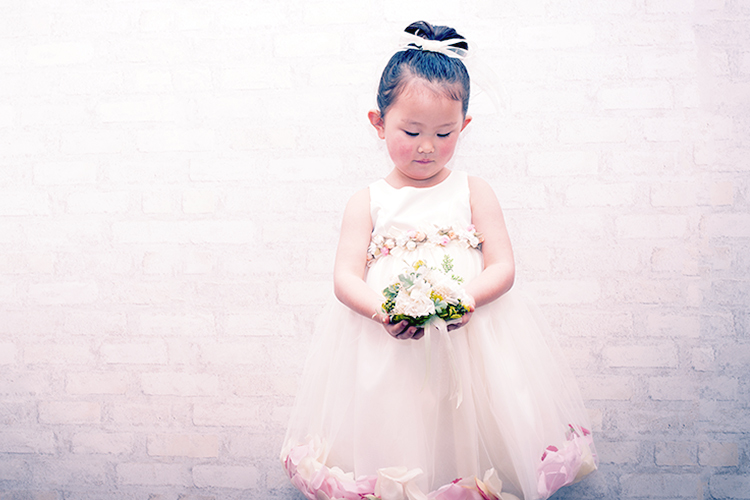 The age-old wedding tradition of a flower girl stems from an Ancient Roman tradition where young virgins would carry sheaths of wheat, which was believed to bring on well-being and good fortune to the newlyweds. Over time the sheaths of wheat have been replaced with flowers that are scattered along the path that leads up to the altar. 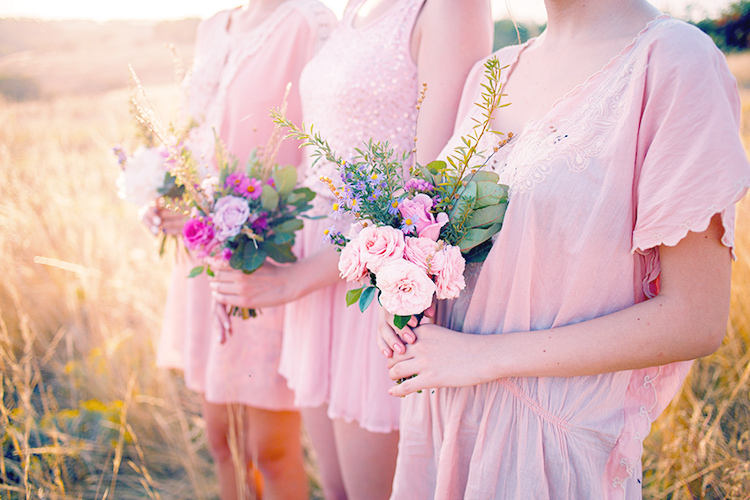 In Ancient Rome, the purpose of having bridesmaids at a wedding was to protect the bride. The bridesmaids would each wear the same dress as the bride in order to confuse the evil spirits and prevent them from finding her. As a result, the couple would avoid being cursed on their wedding day. 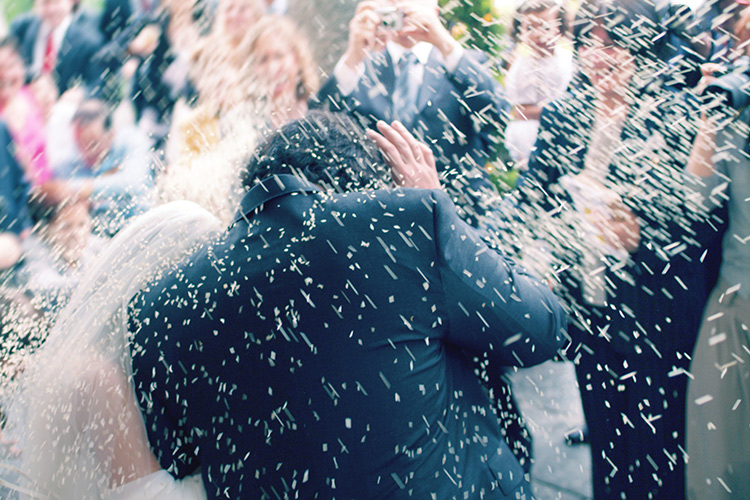 Rice and other grains have long been regarded as signs of prosperity and fertility. Therefore, the practice of throwing rice at a wedding is symbolic of showering the couple with good fortune. Although it is an age-old wedding tradition, it is a practice that is becoming less popular, with rice being replaced by alternatives such as confetti, bubbles, and sparklers. 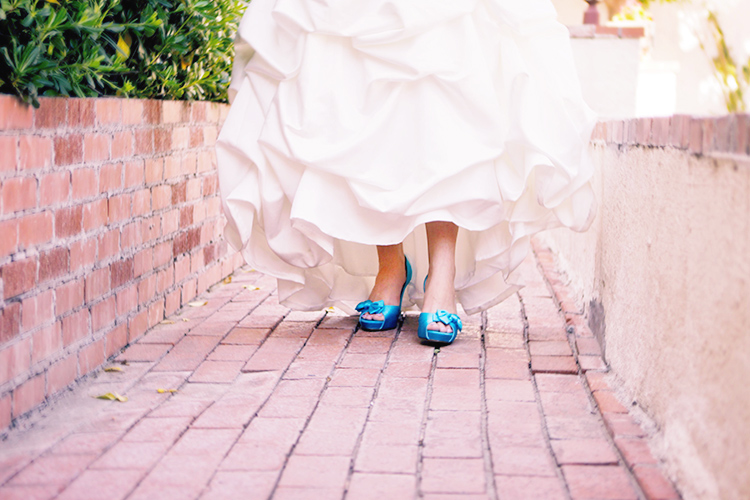 It is widely believed that the color white represents purity. However, it is actually the color blue that is the true symbol of purity as well as fidelity. The symbolism of the color blue dates back to early Christianity, when the color was associated with the Virgin Mary, who is often depicted wearing a blue robe. 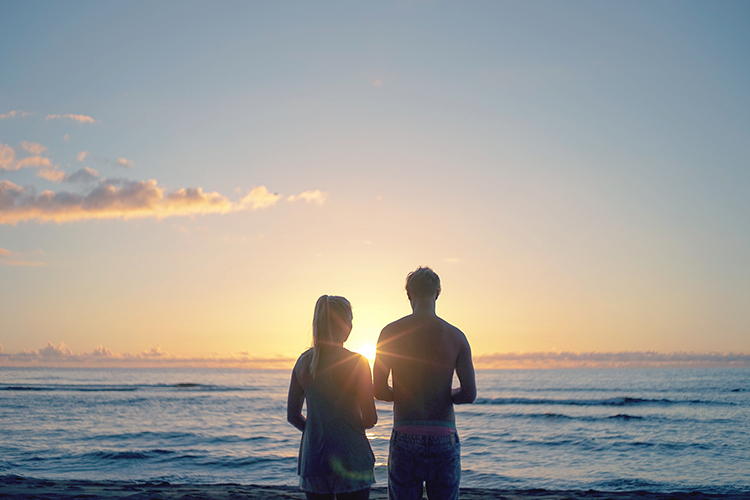 The tradition of going on a honeymoon after a wedding, dates back to the 5th century when cultures represented the calendar time in moon cycles. Once married, a newlywed couple would drink mead, an alcoholic beverage made of honey, a tradition that would take place during their first moon of marriage. 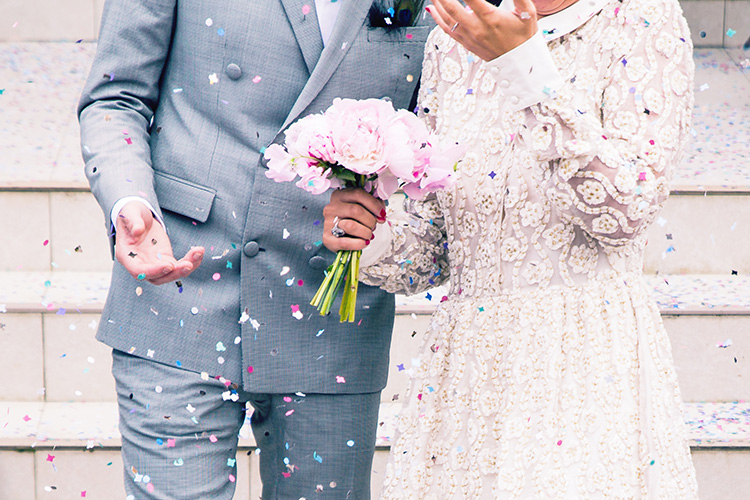 The first bridal bouquet was made out of aromatic bunches of herbs, garlic, and grains, which were ingredients that were believed to have the power of driving away evil spirits. Over time, the herb bouquet was gradually replaced by flowers which carry special meanings in different cultures around the world. 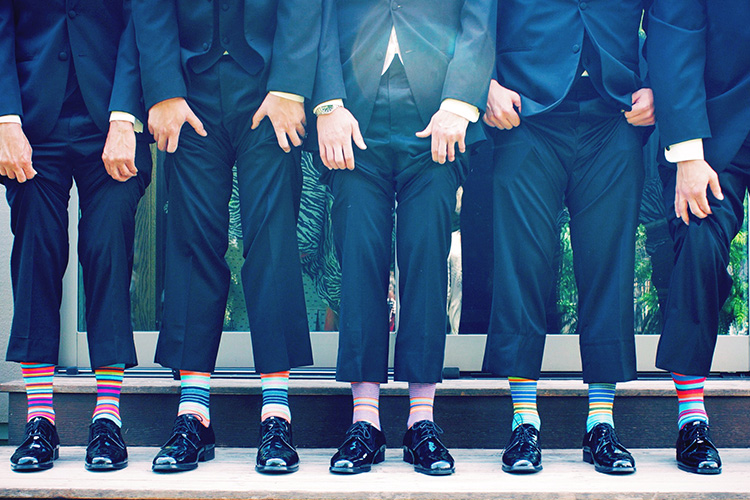 The tradition of having groomsmen as part of the wedding, comes from the ancient tradition of kidnapping the bride. Before a couple could get married, a man had to employ his fellow friends or warrior companions to help him fight off other warriors and prevent the bride’s family from finding the couple. The groom’s main warrior companion would be the equivalent of the “best man” at a wedding. 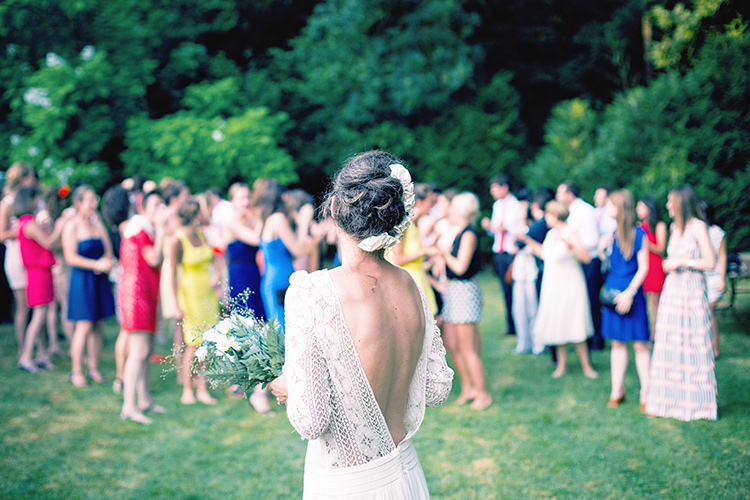 This fun wedding tradition dates back to the 14th century. Back then, it was customary for a bride to toss her garter to a crowd of men at the wedding party. Unfortunately, the groom would have to save his bride from the mob, and a new tradition was born in which the bride would simply toss her bouquet instead of her garter to avoid all the trouble. Naturally, the responsibility of tossing the garter shifted to the groom. 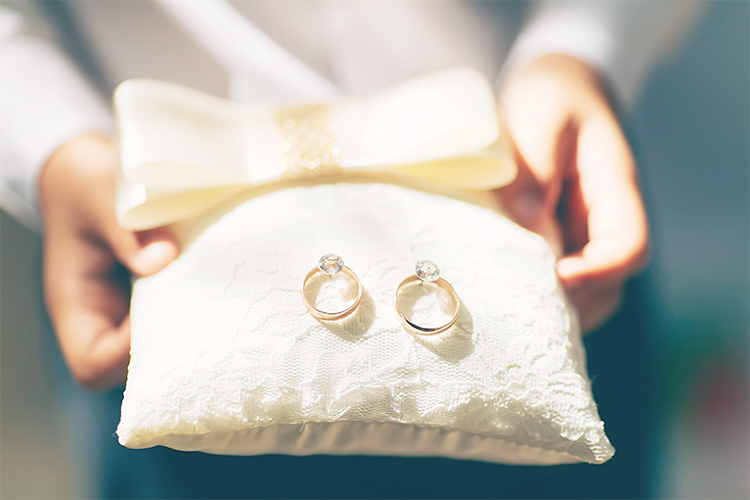 During Victorian times, a pageboy was responsible for carrying a bride’s train down the aisle along with a prayer book. At the same time, Victorians began to place the ring on small pillows as a display of their wealth. This is because pillows used to be very expensive and were luxury items that only the elite members of society could afford. Eventually, it became the pageboy’s responsibility to carry the ring pillow down the aisle and is a tradition that has evolved into the ring bearer that we are familiar with today. 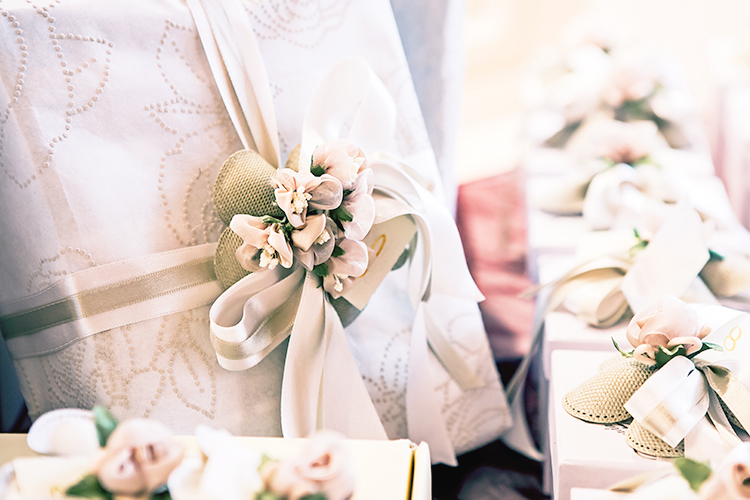 The origin of the wedding registry dates back to 1924 at a Marshall Field’s store in Chicago. Also known as a bridal registry, it was a way for the couple to choose their fine china and silver for their big day. Soon the idea spread across the country and was popularized in the retail industry to include wedding gifts for the couple.

Whether you’re planning your wedding ceremony and reception, attending one soon, or just want to learn more about the history of marriage, you’re sure to be surprised by how much these wedding traditions have changed since they’ve originated! Although traditions play an important role, history has shown us that it’s okay to get a little creative when it comes to planning your special day.