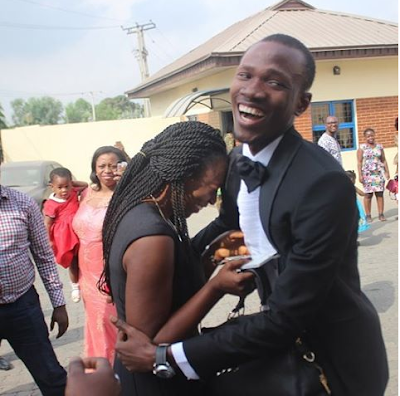 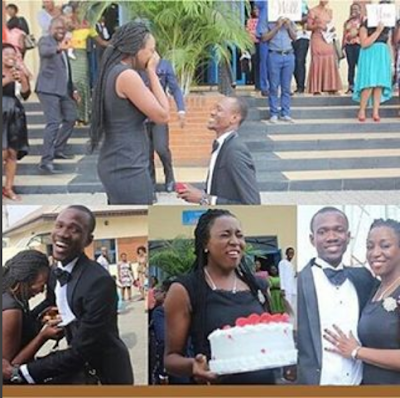 ‘Once in a lifetime, someone walks into your life and everything changes.  That peaceful decision to follow my heart remains one of the best I’ve ever made.” Isaac gushed while Bolu said “GOD HAPPENED TO US!!!! #Gracefoundus #GodinspiredkindofLove #iamengagedtomybestfriend #weareateam #Godsgotthis #Godsgotus #hefoundmewhilewewereserving #GodrewardsHissonwithHisdaughter ������ #lovethatmakesyoubetter #Oluwapawalerinayo #manwhoseheaddeyhinneck lol #okayicouldgoonandonandon  My perfect gentleman aka God’sman. Here’s to an amazing and titillating #titilai with God as our Most Senior Partner!”

Narrating their love story, Funto, the brain behind the match making said “One lovely Saturday evening @tifeinspires comes to visit as we had not seen in a long while after I got married, so we started gisting and catching up on work, life, etc and then we started talking about relationship so we got to the part where she was gisting me about some guy that she just met that someone tried to match make her with but she dint really like the whole match making ish.. as soon she said that, Isaac @theisaacola just dropped into my mind.

I had met him earlier where he invited me to host his event and from there he became a friend of the family, helping hubs with some projects and I remember once when he was at our place, we teased him about marriage and he said he had not found her yet, then hubs asked for his specs and I tried to think of any of my single friends who fit the description but none really came to mind. So while gisting with Bolu and his name came to my mind (I believe it’s the Holy Spirit that dropped it) I was like how come I dint think of Bolu.. so I told her that there was this guy I wanted her to meet and told her about him to the extent I knew.. and she was like dint I hear what she just said that she doesn’t really like the whole match making ish… I said I wasn’t matchmaking o that I just think they should meet.. so she left and later that night I pinged Isaac and said I wanted him to meet someone, he laughed like so that’s what I pinged him about then I told him about Bolu and gave him her social media handle and all. Later I asked Bolu if I could give him her number and after plenty talk she said OK. . Fast forward to their first meeting, that night Bolu sent me a text “I like Isaac” (sorry to burst your bubble here Bolu????) i was so excited then we talked on BBM and she said how he was different from other guys and ticked all her boxes etc.. later on Isaac sent me a BBM saying he was really grateful I introduced him to Bolu and how she’s everything and more etc he even said he owes me a car and a house haha.. so blessed to be a part of this lovely union.”

Congratulations to the couple!

Chiwetel Ejiofor is super excited as his sister gets married (first photos, videos)

A first of its kind: Fimishade & Yomi recited their wedding vows under a love tree (Photos, video)