Nigeria’s favourite sweethearts, Banky W and Adesua Etomi will be sealing their union in a white wedding ceremony that is set to hold today in Cape Town, South Africa.

As with every relationship, #BAAD2017 has been a long time coming, although it was kept safely away from fans until May this year. Between the official unveiling and today, the couple have given us so much to talk about.

While we may not be worthy of writing the perfect BankyAdesua love story, we will attempt to give a linear representation of how the #BAADest wedding in Nigeria in 2017 came to be, going all the way in time to Banky W’s single-and-in-denial days.

Banky W released the video for his latest single at the time, Made For You. The video featured Nollywood actress, Adesua Etomi as his love interest and no one caught any clues. It was a case of another actress guest starring in a music video. Watching it back now, we think that was the official engagement announcement we all missed.

Banky W shared a photo of himself and his other favourite being, his dog, Duke and as it was few weeks after his best friend, Tunde Demuren got wedded to OAP, Tolu ‘Toolz’ Oniru, fans began to call him out.

They would rather have him hug a woman or a wife than a dog.

The distasteful comments got social media buzzing and even Banky expressed his worries: 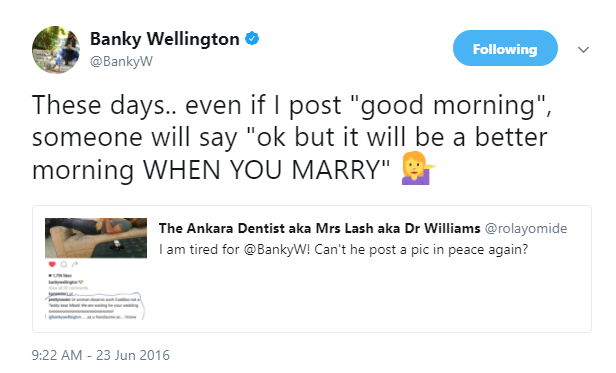 As if those comments prompted him, Banky went on release a single he titled ‘Gidi Love’ in the month that followed the criticism. The song addressed his struggles with searching for love in Africa’s cosmopolitan city, Lagos. We agree it can be a bit hard but Banky did drop a clue in verse 1 of that song and again, we missed it.

“Met an actress, gave her the keys to my heart, yes. I was in love like a movie with an unhappy ending”

When he first announced ‘Gidi Love’ on Instagram, Banky W penned a lengthy message about pressure to get married and stated that “the song is in defense of all single people in Lagos and all over the world.” He said at the time, “Some of us are just not ready. Some of us are single and searching but it hasn’t worked out yet.”

Why did you lie to us, Banky?

Banky W made his acting debut in the blockbuster movie, The Wedding Party. He co-starred alongside Nollywood actress, Adesua Etomi and although there was a collective acknowledgement of the chemistry between both actors, we still missed every clue.

All the buzz from The Wedding Party movie had settled and while producers had began teasing about a sequel, Banky W and Adesua Etomi simultaneously announced their engagement via Instagram.

For the first few minutes, we thought “wow, what a perfect way to announce The Wedding Party 2” but the reality began to sink in when congratulatory messages from their close friends and other celebrities started to fill up our Instagram feeds.

I went to an event in 2015 and I suppose that was the beginning of something amazing because once banky saw me, he decided that he was going to be my biggest fan. He slid into my DM and sent the funniest message and that was how we became friends. At the time, I wasn’t interested in anything but a friendship and he was very respectful of that and so we stayed just friends for about a year and a half. Our friendship opened my eyes to a lot of things. Opened my eyes to the type of man Olubankole is and WHAT A MAN. WHAT A MIGHTY GOOD MAN. Olubankole, Your Heart is pure and good, to the very core. You are proof that God is real, you are proof that what’s on the inside is greater and so much more powerful than what we see on the outside and you are the evidence of what I hoped for. I bless God for entrusting my heart in your hands because I know it’s safe. You are everything i prayed for and so much more. Thank you for praying with me, fasting with me, always making time for me, laughing with me, and caring more about me than yourself. Thank you for being kind, loving and full of Integrity.
And i’d like to say one more thing. I’m SO SORRY that it took me sooo long to realise that it was you. It has always been you. It couldn’t have been anyone else. In February 2017, you said you couldn’t be without me and asked me to be your wife and I said YES cause I can’t be without you. It will be an absolute pleasure and one of the greatest blessings of my life to walk the path of life with you. Thank you for being who you are.
My goodluck charm, my King, my lover, my bestfriend.
I love you till eternity and beyond.
No, This Is not a movie.
Future Mrs W.

Only three days after the Instagram takeover, the couple took the first step in their three-part wedding with an Introduction ceremony. They had it all coming and their timing was just as perfect. Relive the experience here.

God Loves Me. He Created You Before I Even Knew I'd Need You. He Gave Me Love That My Mind Still Can't Fathom. He Gave Me A Man That Looks At Me Like I'm Magic. A Man I Adore. A Man That Inspires Me. Bubba, I Love You PIECES 😍💜 To All Our Well Wishers, May The World Celebrate With You. God Bless You All. #BAAD2017

Banky W and his squad spent days holidaying in the Punta Cana island of Dominican Republic and we genuinely thought the wedding was going to hold there.

The couple pulled another surprise on us. Weddings hold on Saturdays in most parts of the world and we had assumed #BAAD2017 was going to be another Saturday event but it turned out to be a Sunday afternoon gig that set social media aflame.

Today is the final leg of #BAAD2017 and we dare say it will be LIT.

10 wedding guests we can trust to absolutely slay at #BAAD2017

How did these celebs get the Arabian theme wrong at The Wedding Party 2 premiere?