From Gaga to Balmain, for over four decades David Bowie influenced the fashion industry in a great way transforming it into what it has become today.

Married to Iman, a fashion entrepreneur and model, Bowie’s career inspired celebrities, stylists and fashion designers alike. Lady Gaga turned to his alter egos for her tour costumes and music videos and he starred in a fashion film for Louis Vuitton, in which he reprised his role as ‘ Goblin King ’. 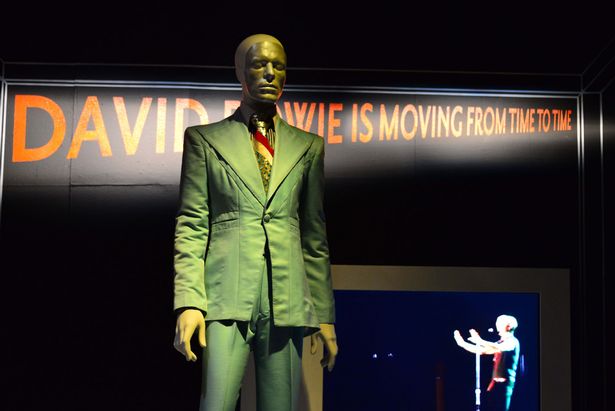 Ironically Bowie always said he wasn’t interested in fashion, only in wanting his music “to look how it sounds”.

The reluctant style icon’s influence on the runway in itself serves as a retrospective of his work and is testimony to his undeniable impact on the fashion industry.

In a report by Fashionista and Mirror UK, see how below. 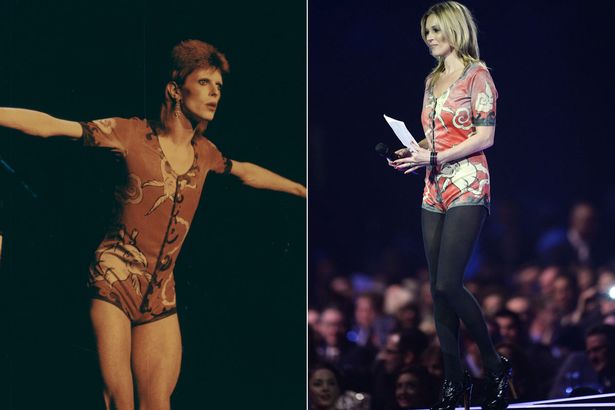 At the 2014 Brit Awards, Kate Moss took to the stage in the iconic playsuit worn at Ziggy Stardust’s final appearance in 1972. The close Bowie friend and fan collected his award for British Male Solo Artist.

During the acceptance speech, written by Bowie, she told the crowd: “In Japanese myths the rabbits on my old costume that Kate is wearing live on the moon. Kate is from Venus and I am from Mars.” 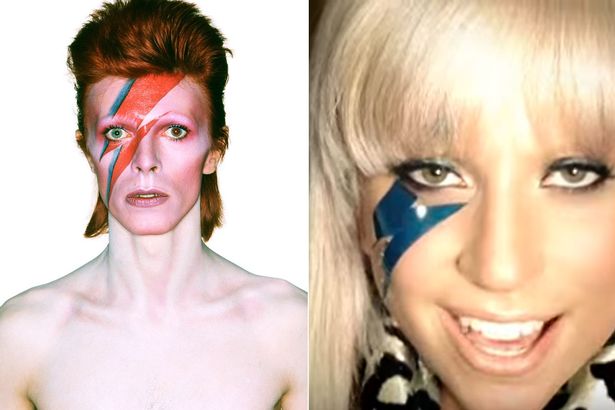 Not only did Lady Gaga draw inspiration from Bowie for her flamboyant tour outfits but she copied iconic images for her music covers. The artwork for her single ‘Applause’ looked like Bowie’s ‘Scary Monsters’ album cover and she was inspired by Aladdin Sane for her debut single ‘Just Dance’. 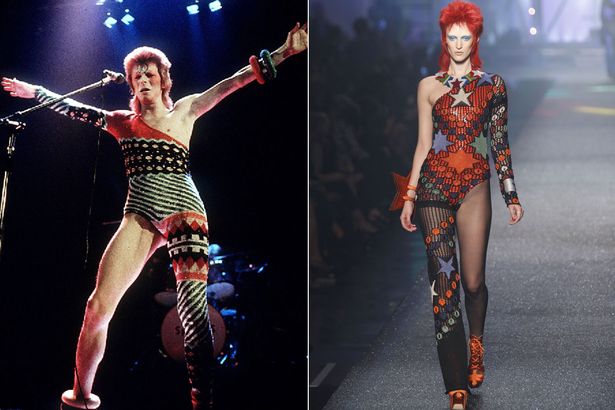 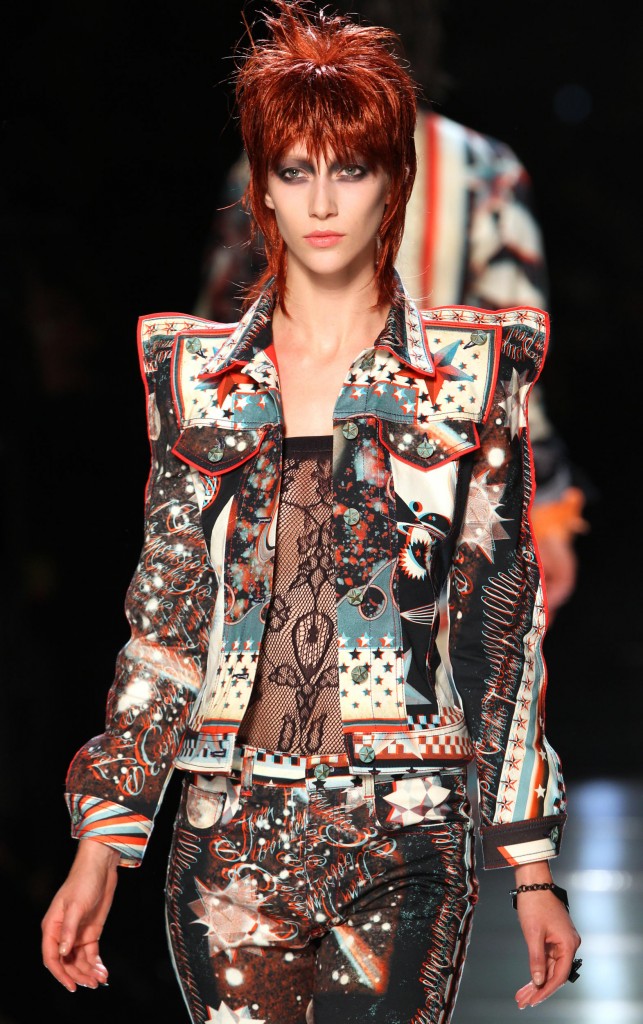 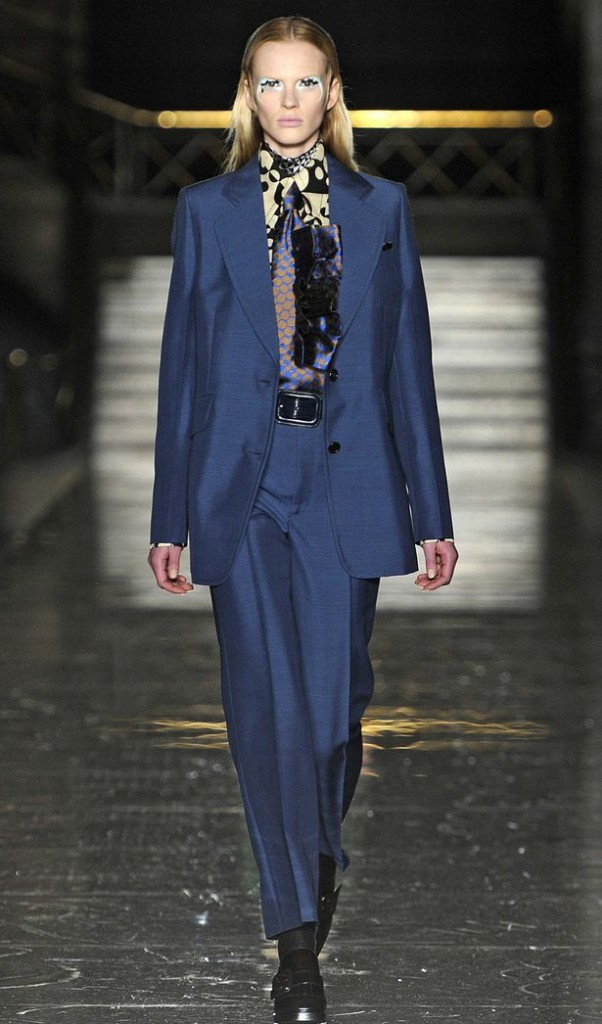 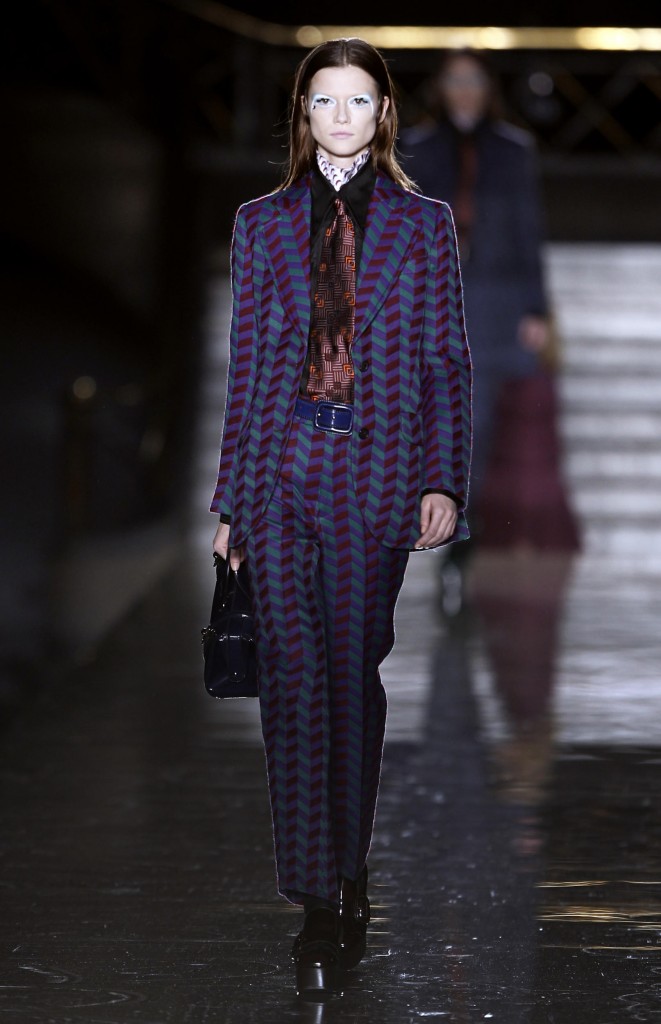 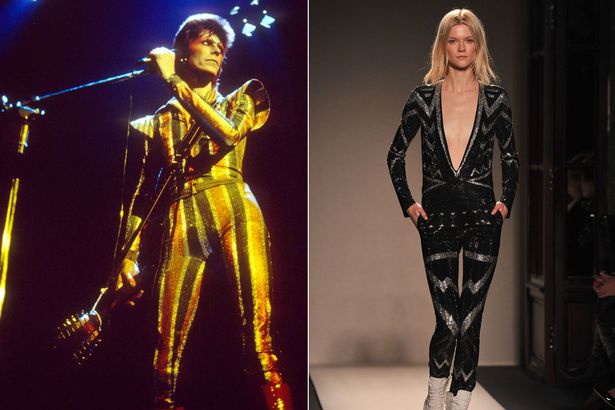 In 2011, Balmain designer Christophe Decarnin used Bowie’s Aladdin Sane as the inspiration for his 2011 collection. The crystal encrusted jumpsuits and all-in-ones were a first for the designer who served up a 70s inspired Bowie themed collection.

In 2003 Kate Moss recreated the famous Duffy photograph of David Bowie with a lightning slashed cover.

In 2011 Kate Moss was convincingly transformed into David Bowie’s Ziggy Stardust from the mullet hair to the outfit to her anchor tattoo (Bowie once sported a fake anchor tattoo) for the iconic cover. 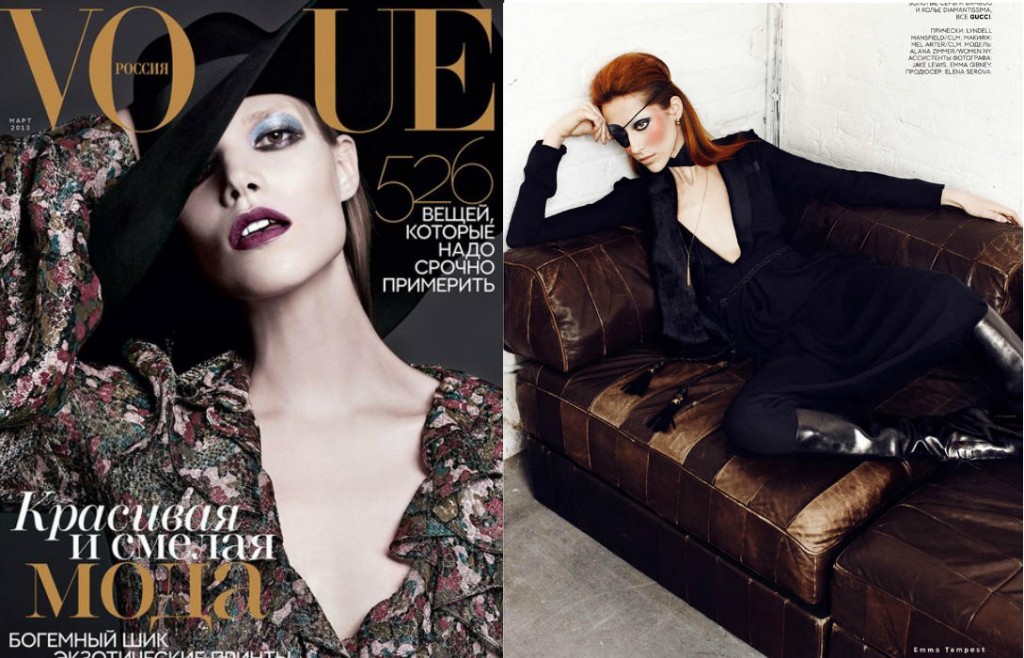 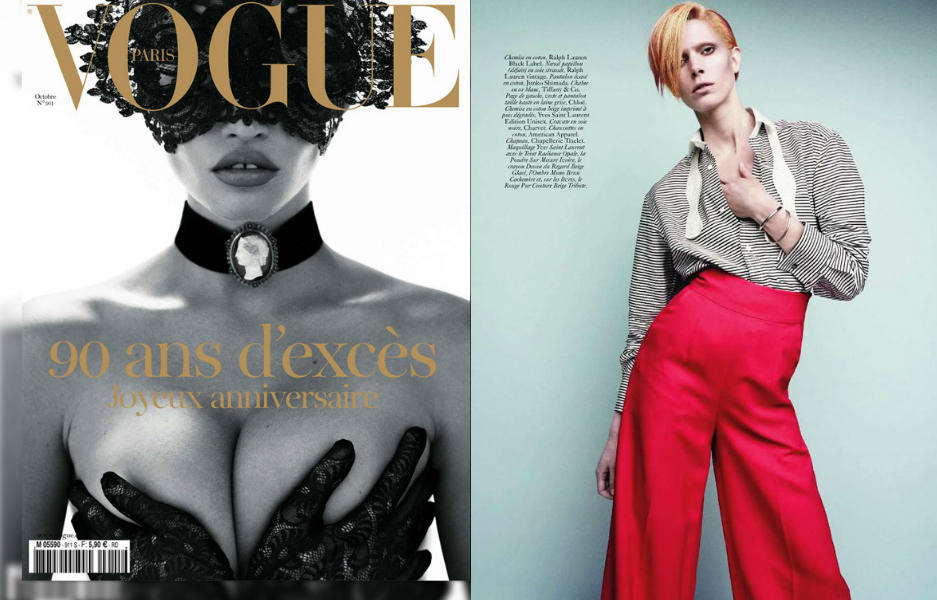 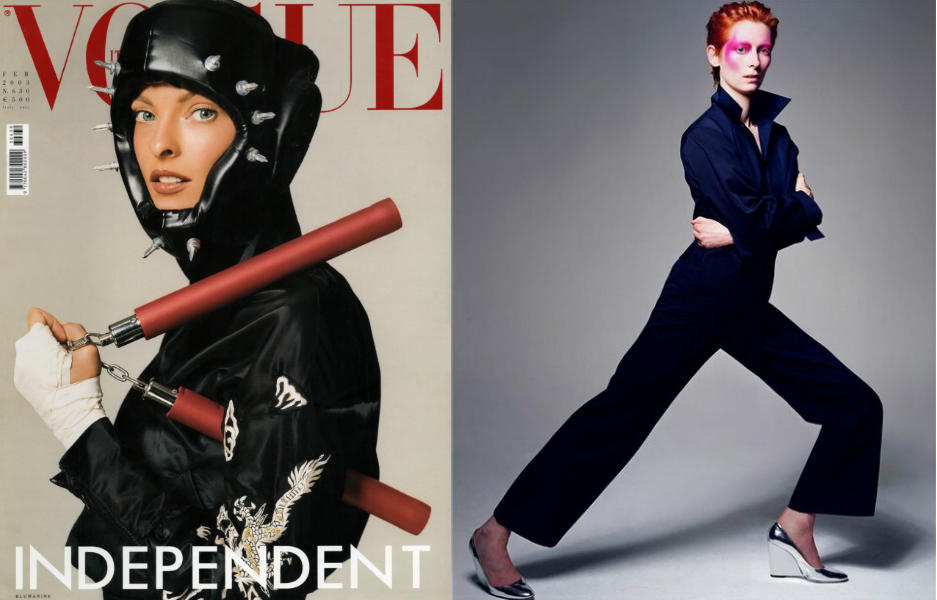 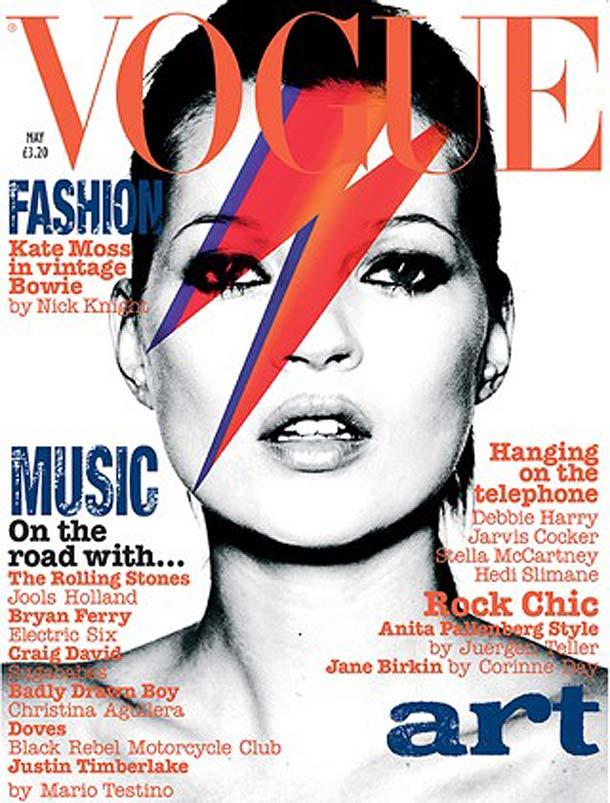 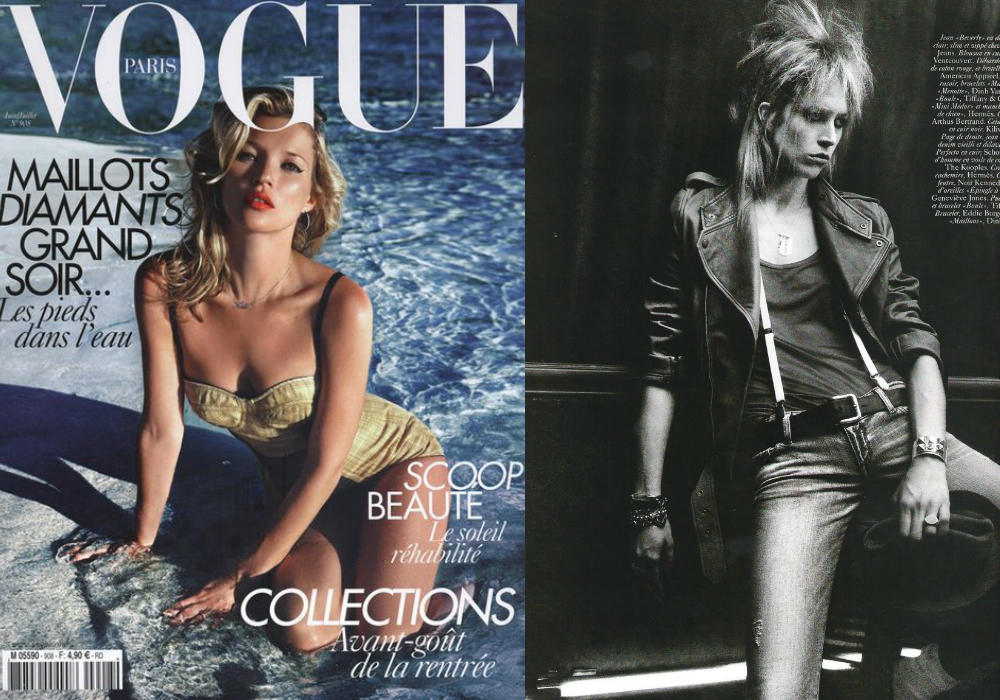 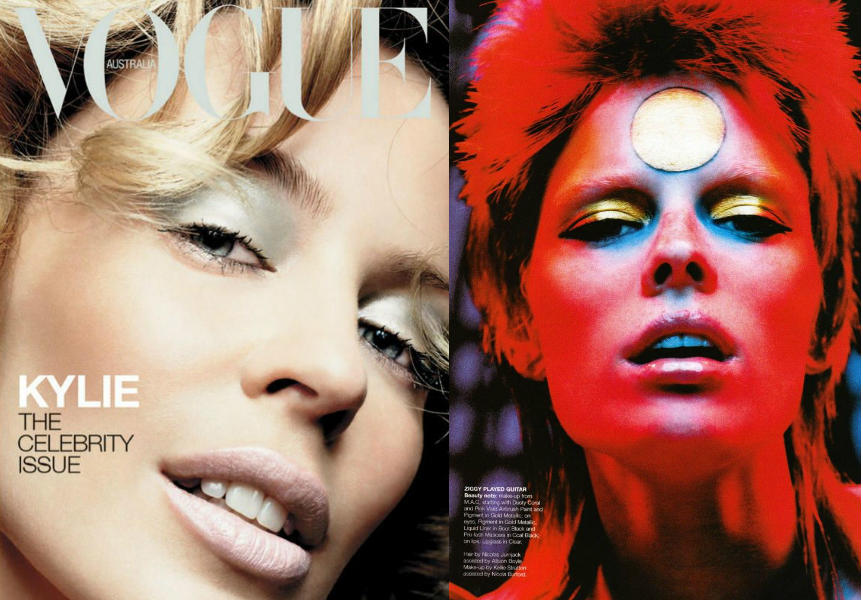 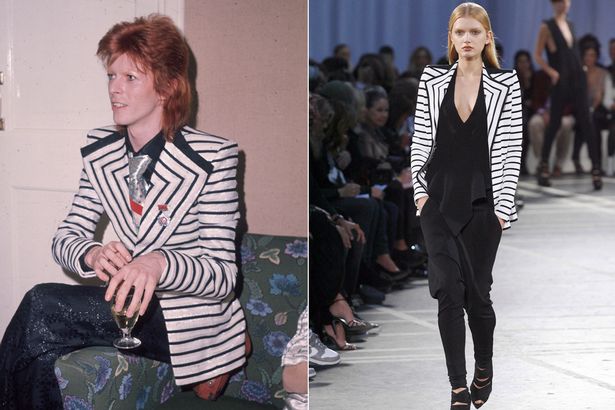 Riccardo Tisci’s 2010 runway collection for Givenchy played homage to Bowie’s Aladdin Sane era. This iconic geometric stripe jacket was an interpretation of a jacket worn by Bowie in 1973. 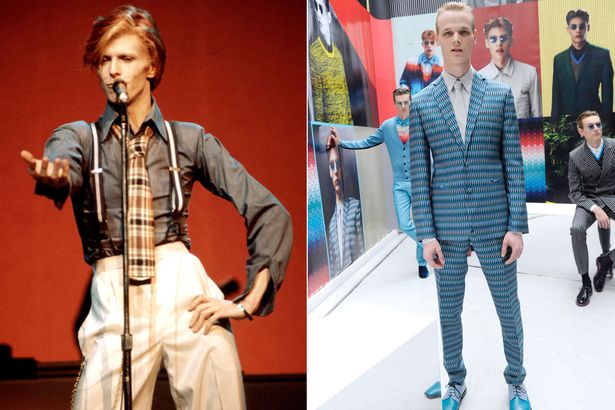 In 2013 British designer Jonathan Saunders clearly had Bowie on his mind and his confident, elegant yet lanky tailoring with dramatic silhouettes was a nod to Bowie’s ‘Plastic Soul’ years. 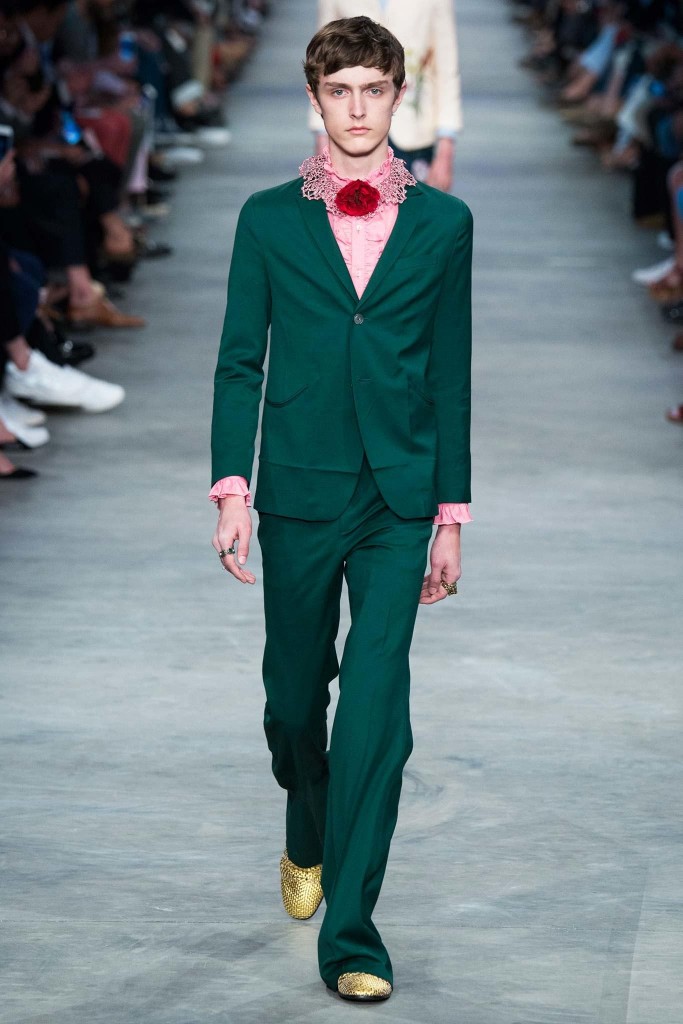 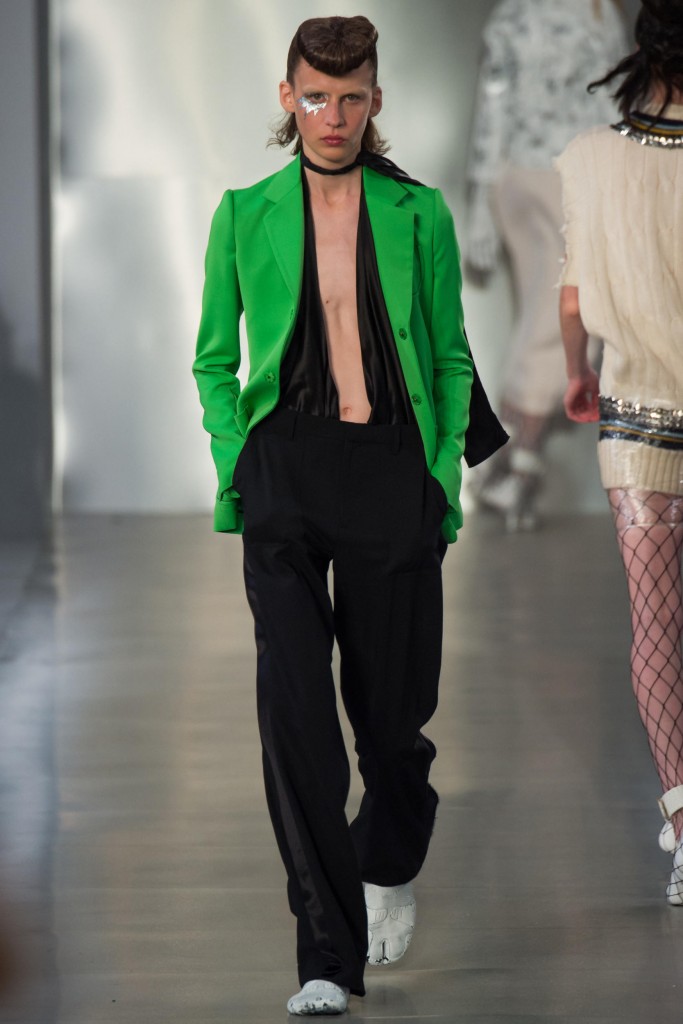 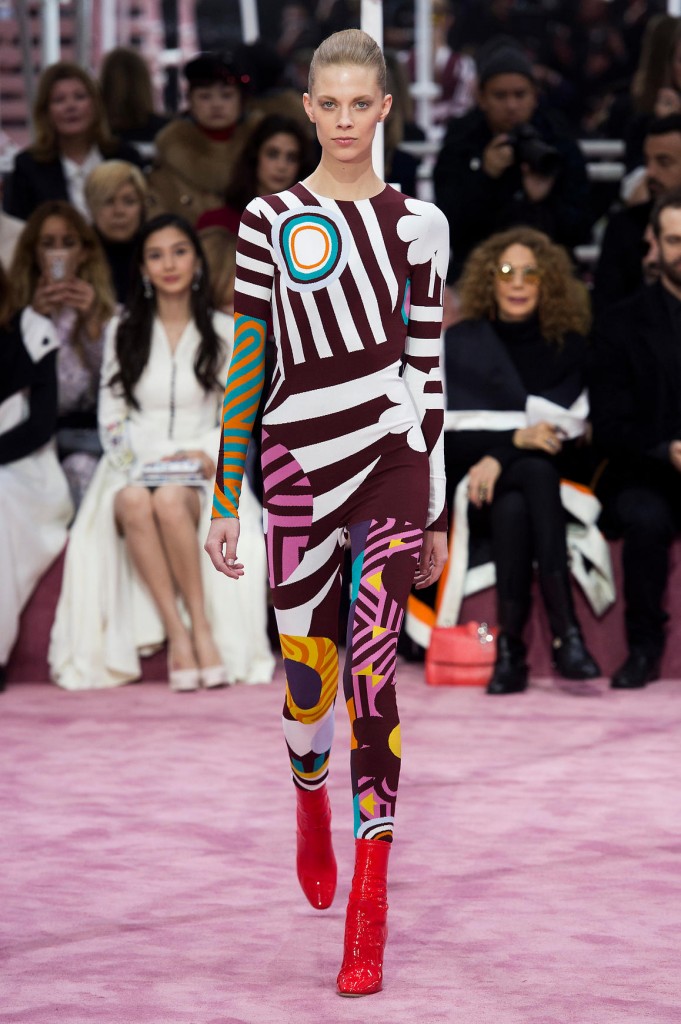 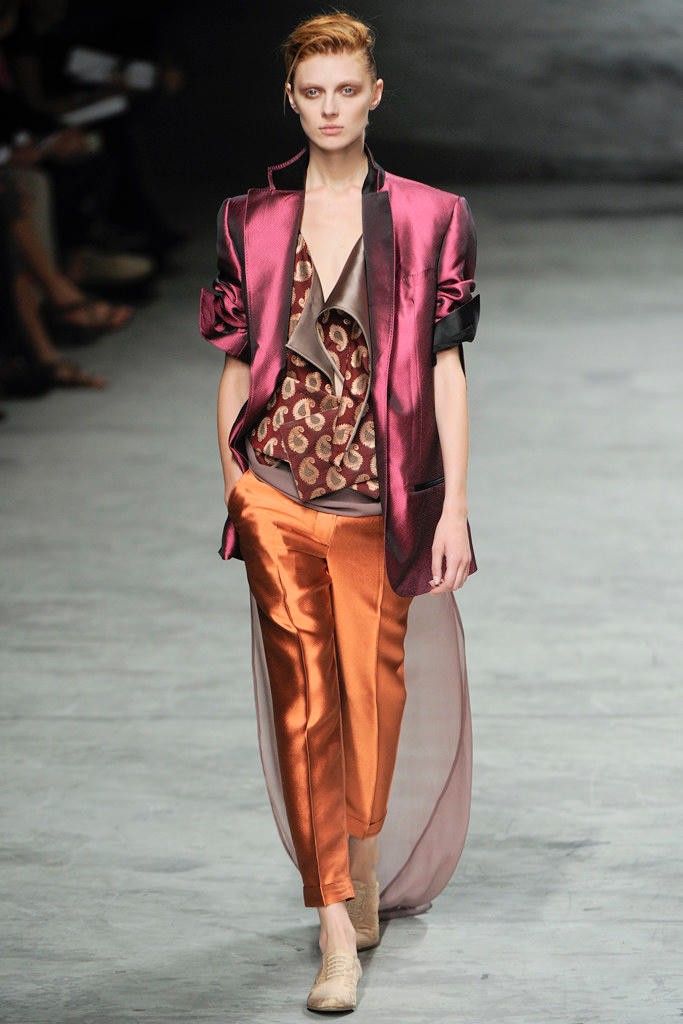 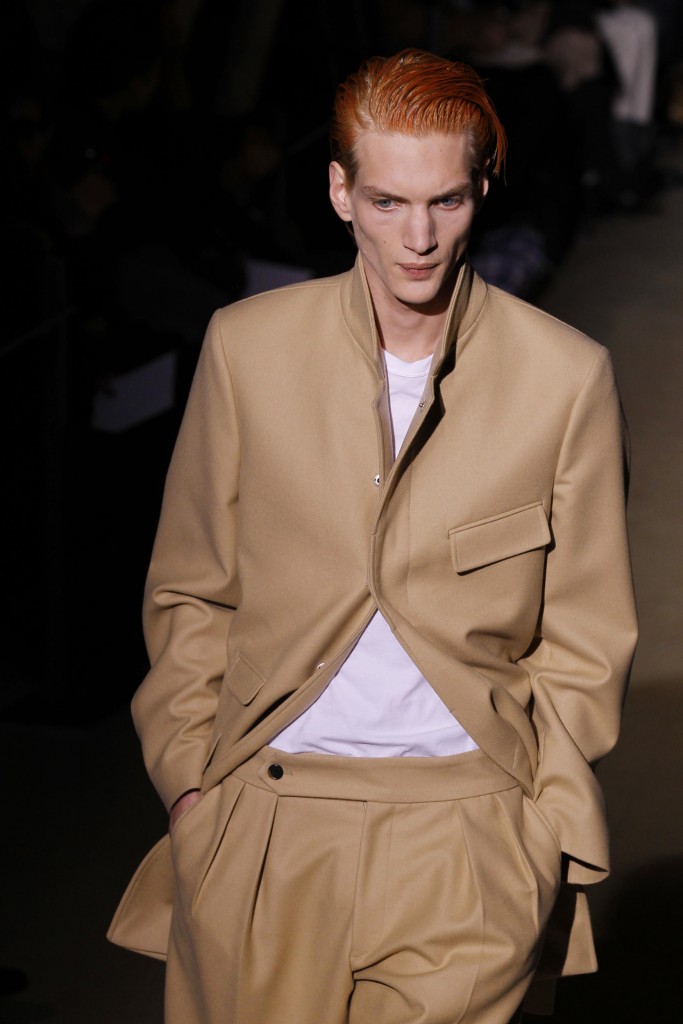 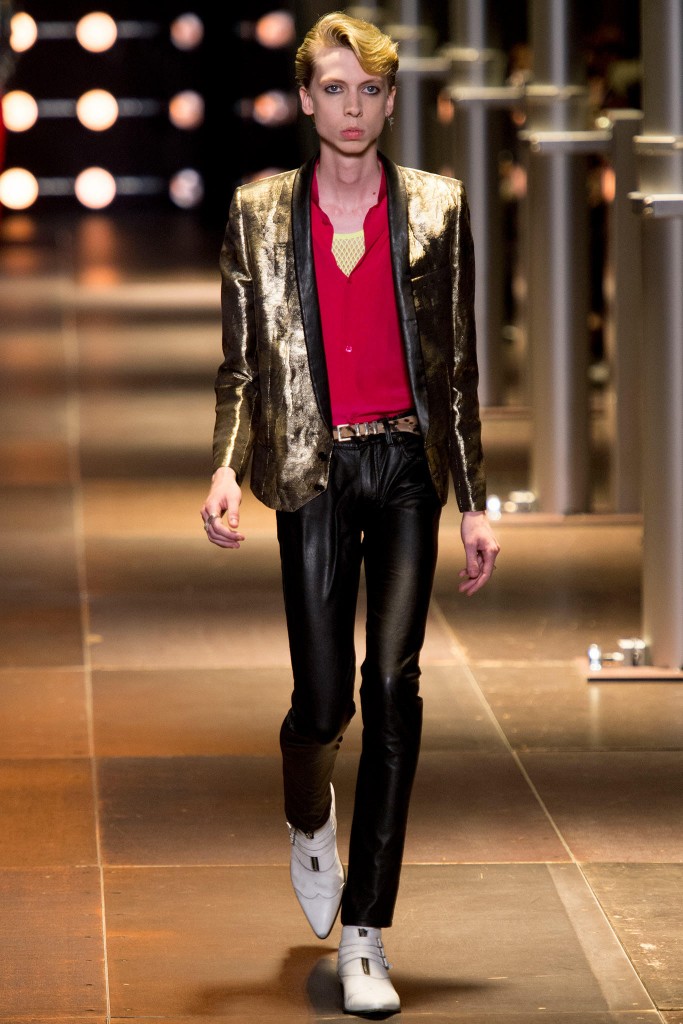 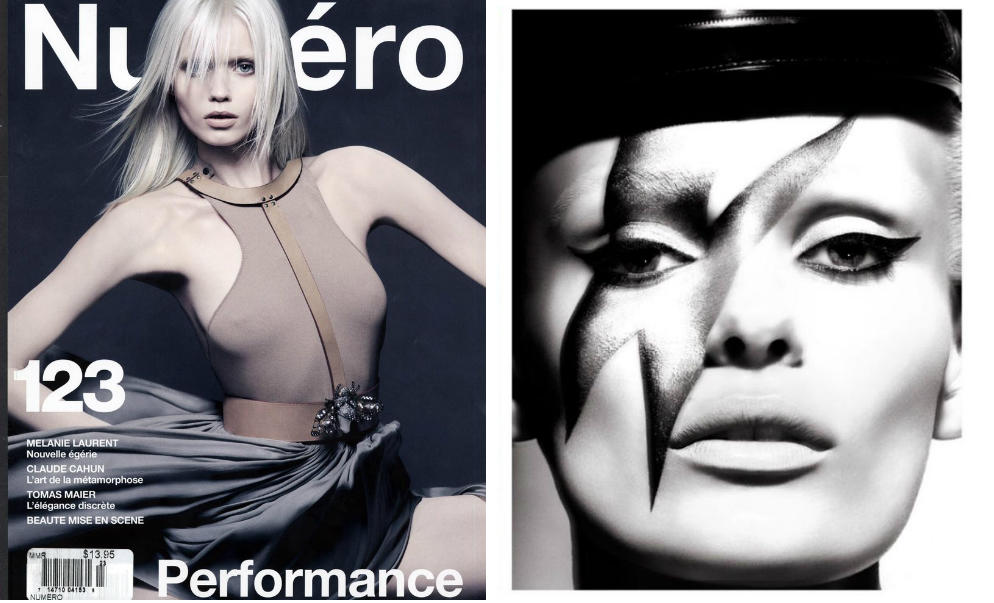 {A Report by Fashionista.com + Mirror.uk}