This week, a new Miss Nigeria will be crowned at the Eko Convention Centre.

The journey to this year’s finale started in November when auditions were held in three cities – Abuja, Port Harcourt, and Lagos – over a one-week period. From personal photography sessions from Studio 24 using cool photo props, there were also monopoly games and passion project activities to keep the ladies entertained. Refreshments were also served.

The auditions started at the Transcorp Hilton Hotel in Abuja on November 7 with an impressive turn out of contestants from the Northern region who showed up for a chance to become the next queen. George Okoro (photographer and Lifestyle Magazine publisher), Adama Indimi (CEO Reign by Adama Lashes), Ogugua Okonkwo (CEO Style Temple) and Andy Ogbechei (Creative Director, A-Squared Network) were the guest judges at this phase of the auditions, accompanied by Enyinne Owunwanne (CEO, Times Multimedia – organisers of the Miss Nigeria pageant).

Then the team moved to Port Harcourt on November 9 to receive contestants from the South-South/South-East region at the Echelon Heights Hotel, before heading to Lagos where the audition was held at the Times Multimedia Lagos Headquarters.
A week later, the 37 semi-finalists were announced in a special Instagram Live Session, setting the stage for Thursday’s grand finale.

Miss Nigeria was started by Daily Times Nigeria in 1957. Then, contestants were required to post their photographs to the Times headquarters in Lagos, before the finalists were shortlisted and invited to compete at the Lagos Island Club. It was the premier pageant in the country, and was a powerful medium which empowered several young Nigerian women, and inspired the country as a whole. Grace Oyelude won the maiden edition. She would not be the last.

The pageant continued to prosper until it was rocked with several scandals, the collision with military history and national turmoil, and the unfortunate decline of its parent brand, Daily Times. It lost his exclusivity, uniqueness, and credibility, and was virtually buried under the sands of history.

In 2005, Fidelis Anosike took over a decapitated Daily Times. Young and bustling with energy, he set out to revamp the vintage legacy of the publication. He has since set his sights on rewriting the story of Miss Nigeria and graft in new chapters filled with hope, dignity, and value.

“For us, Daily Times and Miss Nigeria is one and the same,” Anosike told THISDAY in 2015. “The show is going to be the premier platform that the company’s products, services, and different people can use to connect to every woman. Every woman is a queen. What we’ve been doing over the past ten years is to get the Pageant to metamorphose into what it should be.”

This week, Mr. Anosike spoke to THISDAY again and shed more light on what Nigerians should expect from the upcoming show.
“This year, we are going from strength to strength,” he said. “Every state has got its own representative. And it’s also important to note that Miss Nigeria is 60 years old. It was founded in 1957.

“This year, we were also able to do a proper boot-camp; all the semi-finalists met with several prominent Nigerians, including the Director General of The National Agency for the Prohibition of Trafficking in Persons (NAPTIP), who is the purpose-partner for this year’s pageant – the Miss Nigeria to be crowned will be the ambassador for human trafficking, she will spend her time and energy working with NAPTIP to raise awareness about the ills of human trafficking and try as much as possible to be able to contribute her own quota into ending the illicit trade. “We also had a couple of top women personalities who went into the boot-camp to talk to the girls.”

The boot-camp ended on December 18, after which the girls went to Ilorin to meet the first ever Miss Nigeria, who is 86 years old. From there, they are scheduled to return to Lagos and start the rehearsals for the final day which Mr. Anosike says “will be epic.” The pageant will be hosted by Bovi, Ebuka, Olive Emodi and Lala Akindoju; and 2face Idibia is set to perform.

“Miss Nigeria has been fully restored to its original intent, which is to be a platform young female empowerment in Nigeria,” Mr. Anosike said. “We want to use it to raise the voices of women. We believe that every Miss Nigeria will also take on these issues, raising the voices of women, especially as it relates to issues around the environment. We have very solid partnerships with over 30 media houses and everybody has now come to understand that this is a national pageant not a beauty pageant.”

When asked how the show plans to balance the moral debauchery associated with beauty pageants, Mr. Anosike took exception to the content of Miss Nigeria.
“It’s all about communication, about purpose; it is about people understanding that this is a platform for female empowerment,” he said. “Every woman is a queen – mothers are queens, sisters are queens. This epitomises ‘queenship’. Miss Nigeria is supposed to be a role model for young women. What we are doing is building a purpose into the show – so it is beauty and brains. The idea is to be able to inspire young women. We don’t do all those beauty pageant stuff where they go onstage and take off their clothes. We don’t commoditise women. Miss Nigeria has stopped that a long time ago. And that’s one of the reason why we don’t send anybody to Miss World or Miss Universe because they go there and do all these kind of things.” 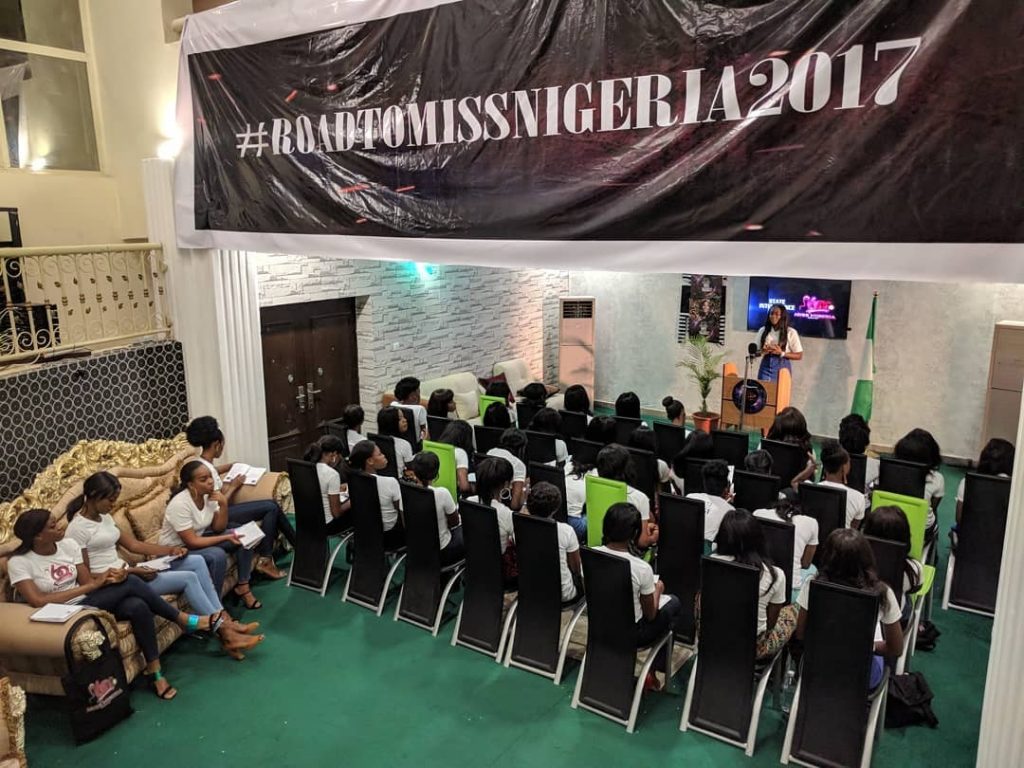 “Miss Nigeria focuses on issues that affect Nigerian women; she is an ambassador of culture, of purpose, of the environment. We want her to focus on the Nigerian people. She does not need any validation from anywhere. She does not need to go outside to win anything. It’s a national brand, not a beauty brand.
“The girls have their calendars planned and we have partners that will keep them busy, because we want them to have a purpose. Going for international beauty contest is a colonial mentality. Queens don’t compete, they reign. You can’t say you are Nigeria’s Queen and go outside and be competing with other people.”

On what has been the challenge in organising such a huge event, Mr. Anosike pointed towards the struggle to recreate the show’s purpose.
“The basic challenge we had was to be able to recreate the purpose for which this pageant was founded in 1957,” he said. “Now, we have gotten it right; and we know this because of the responses we are receiving. We have people entering from Zamfara, from Kano;
“It’s going to be a beautiful show. We are trying to make the show like the Oscars, so it will be a fusion of fashion, beauty and everything good about Nigeria.
“The contestants have to know about the states they are representing. We also want to use this help promote our history and heritage. We must be proud of who we are. Nigeria has come of age; we’ve seen what people have done in the music industry. That’s the kind of inspiration that we want to draw on.”

Next stop, Primark! Ada Oguntodu is not done searching for the perfect Christmas party outfit

The Unveiling Of The 2018 Miss Nigeria finalists!

One of these 37 ladies will emerge Miss Nigeria 2017 tonight

Miss Nigeria 2017: Contestants have arrived the bootcamp and you can livestream on social media