The Scandal actress is the cover star for Glamour Magazine’s May issue and she opens up to the magazine on issues surrounding race, life as Olivia Pope, motherhood and beauty secrets.

On race, Washington said it was as if her character was “raceless” in the first season, “there was no denying that Olivia was a black woman, because I’m a black woman playing her in badass white trench coats that call to attention the fact that I’m not looking like anybody else on television. But we didn’t talk about her identity as a black person“. 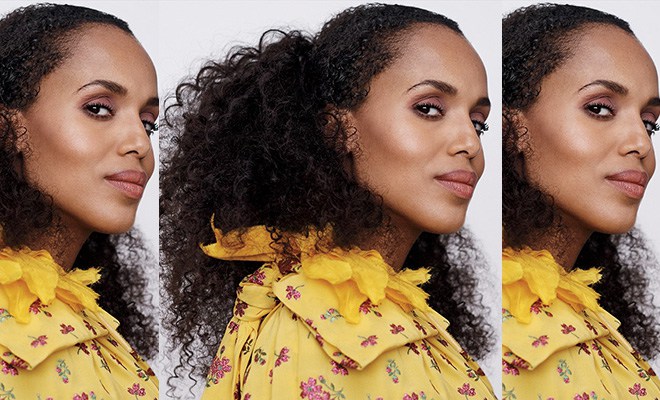 Later though, the writers on the show began to make efforts to depict Pope as a black woman and that was represented in subsequent seasons. She said, “When Olivia was kidnapped, it was not lost on me that the fictional president of the United States was willing to go to war to save one black woman at a time when hundreds of black women were missing in Nigeria and we were begging the world to pay attention“.

On life as Olivia Pope, “I’ve never played a character for this long. Olivia Pope also took my anonymity away. Before, I was a character actor: Nobody really knew that the girl from Save the Last Dance was the same girl from The Last King of Scotland. So I could show up and be a person in the public eye when it was useful, then dip out and have my life. Olivia Pope has really changed that.”

Kerry Washington also shares her plans for after Scandal although she has no idea how much longer she’ll remain the manipulative, powerful Pope. On her new company, she says: “The charge of my production company, Simpson Street, is to tell stories that are about people, places and situations that may not always be considered by the mainstream. Inclusivity is not about, you know, creating a world where straight white men have no voice; it’s about creating a world where we all have a voice. So I’m excited to start that new journey, as a producer.”

On women representation in politics, the mother of two said, “That idea of holding each other’s hands at the Women’s March — it feels like we are being invited to do that every day. So many of us are feeling attacked, whether it’s a woman’s right to choose or headstones in a Jewish cemetery, immigrants being deported or banned. So many of us feel the need to protect and defend our democracy. And march toward the dream of being ‘We the people”. So that’s exciting, scary, and frustrating. We’re awake. We are awake more than ever before, and we have to stay awake.“

We can all agree that the 40 year old is the true definition of “black don’t crack”. She reveals the secret to staying young and flawless and acknowledges parental influences: “We’re an island people; my grandparents emigrated through Ellis Island from Jamaica. My parents’ first date ended at the beach. We’ve all been lifeguards in my family, so there’s a lot of water culture: I did water aerobics the whole time I was pregnant with my son. I drink tons of water—particularly now, as a nursing mom. With my skin, even, I use products all about hydration. It’s all about water!”

Travel with style and comfort | These 12 looks will inspire you

From Lagos to Toronto: Zazaii opens its first stand-alone store in Canada