The team at The September Standard brings to you its annual best dressed lists. 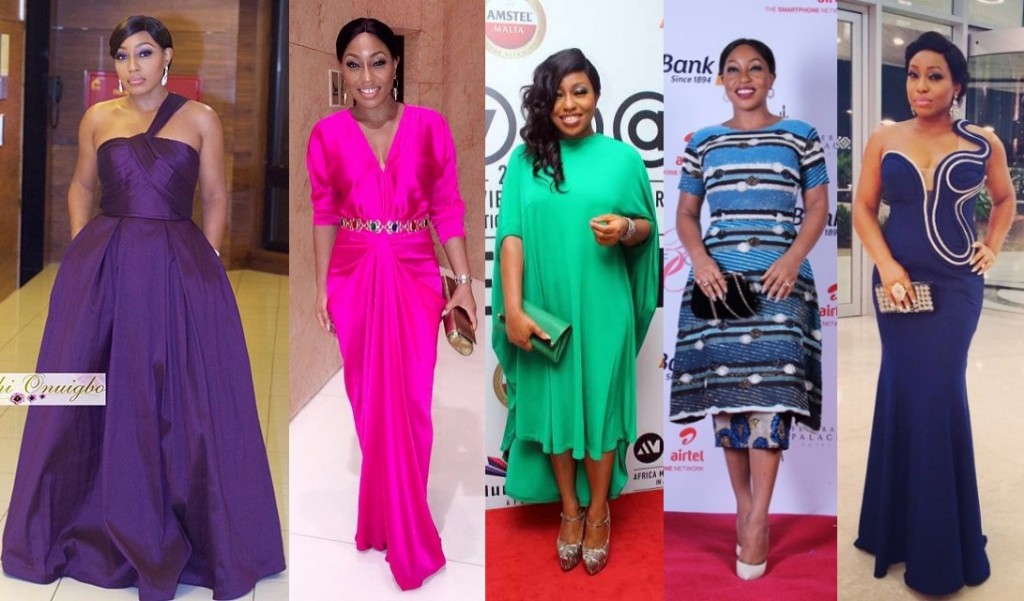 Oh, don’t we just love us some Rita? In the annals of fashion and style, she goes down as a living, breathing legend. And she can get away with anything — even murder, that’s just how good she is. The best thing about her style portfolio is her ability to remain fresh year in and year out. Never one to be a “has been” at the style game, Rita attains the topmost echelon of the stylish elite and then places an extra rung. 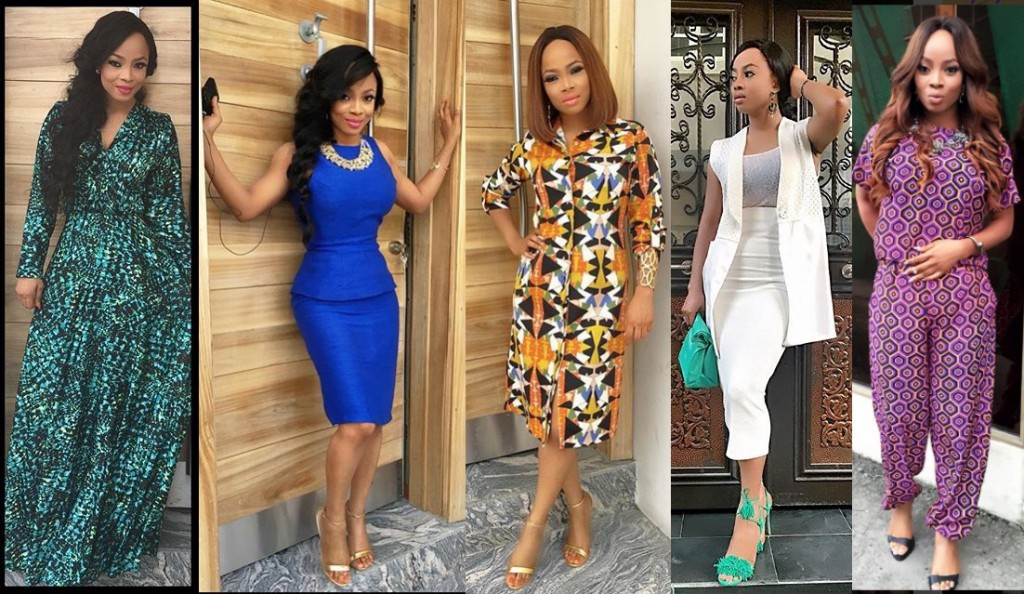 This one person everyone loves to hate slayed carpet after carpet this year, gracing a good number of events and schooling everyone else on how exactly it’s done. Toke almost always had every hair in place and she continuously proved to be a sight for sore eyes when the rest of the carpet went wrong. If we were to award the queen of the red carpet award twenty fifteen to anyone, there’s no doubt she’d be carting it home.

Osas is so pretty it hurts. Like a delicate porcelain doll, she poses on a red carpet and saps the very last oxygen molecule out of a lung. Strutting her way into industry events, she hits the nail right on the head with whatever she’s draped in. And who can forget her best goes-with-everything-she-wears accessory? Hubby, Gbenro. 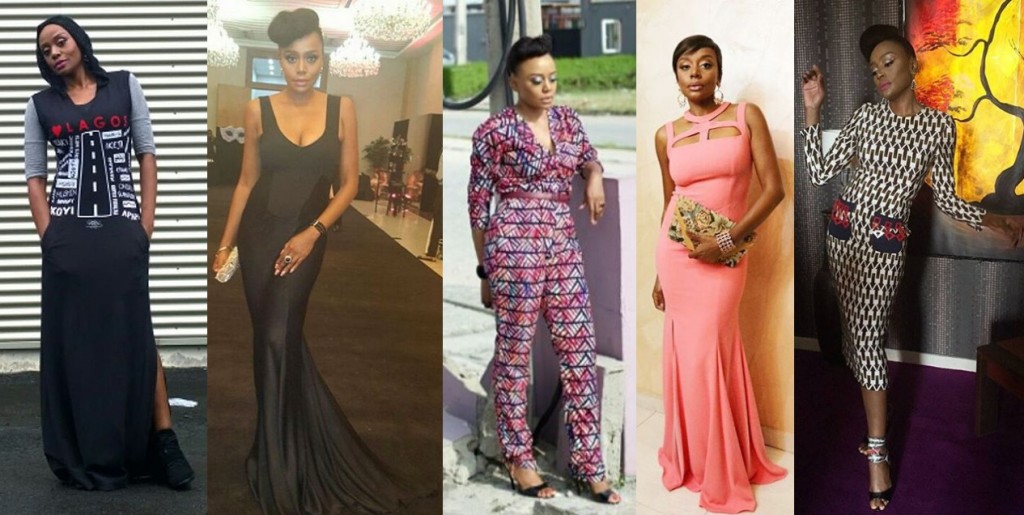 Her style is calm and subtle and loveable like her persona that we get to see. It is not all out in your face but it definitely works — always works and in our eyes, she could do no wrong. Looking forward to 2016 to see what she comes up with.

Words aren’t just enough to say just how happy we are that the Onye crooner is on this list. Waje’s style is fun and modest and it works for us. It isn’t so hard to see why we are so in love. 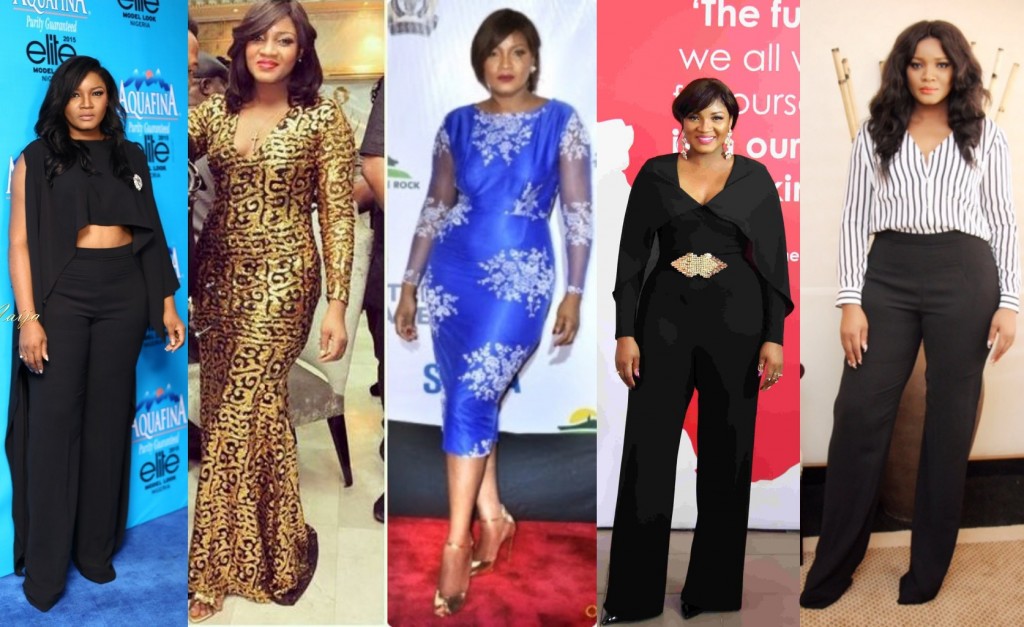 Omotola: mother, actress and activist made a case for bigger girls everywhere when she made it clear she absolutely loves her body and doesn’t need to shed some of it to feel good about herself. And one thing we know, her body loves her right back! How else other than for it to look stunning like she always does when she gets dolled up and hits the town? She sits very comfortably on this list and she totally deserves every inch of it. 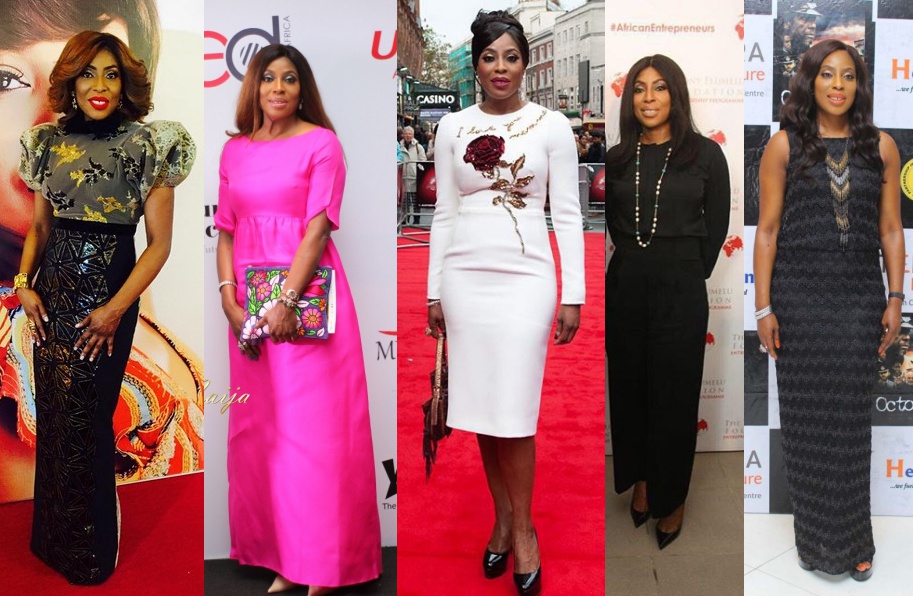 When I grow up, I want to be like Aunt Mo. 50 never looked so good! Mo is the ultimate archetype for sophistication and modesty. Her style is resplendent as she is and we just know there’s more where all of that came from. 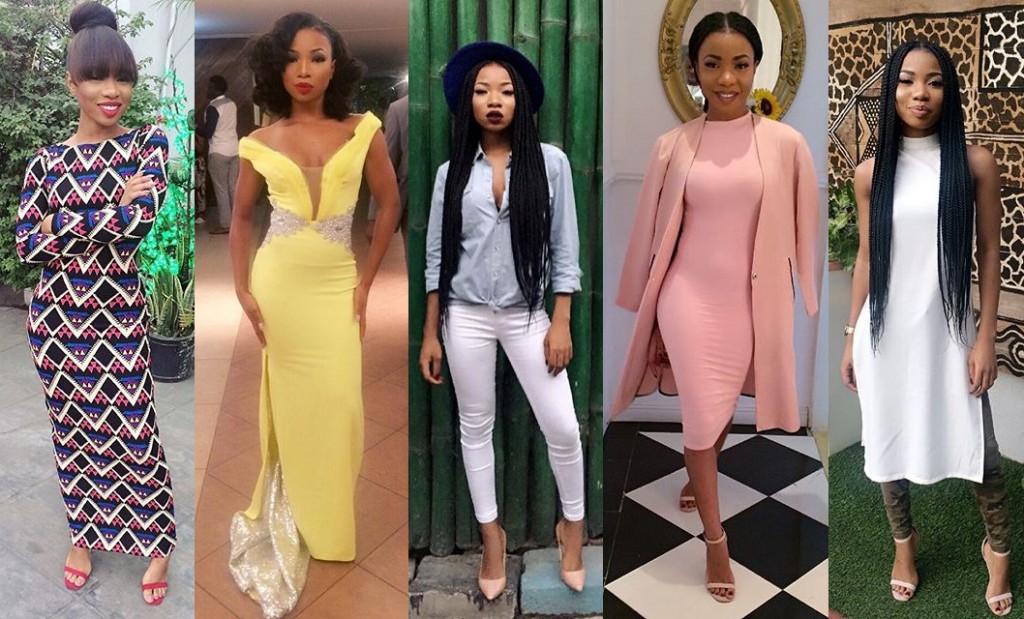 Mo Cheddah is no stranger to the concept of style and inadvertently making it her own. While she made some risqué moves in daring outfits this year, she successfully pulled them off and we have to acknowledge that that is no easy feat by itself. She’s confident in her skin and it shows! 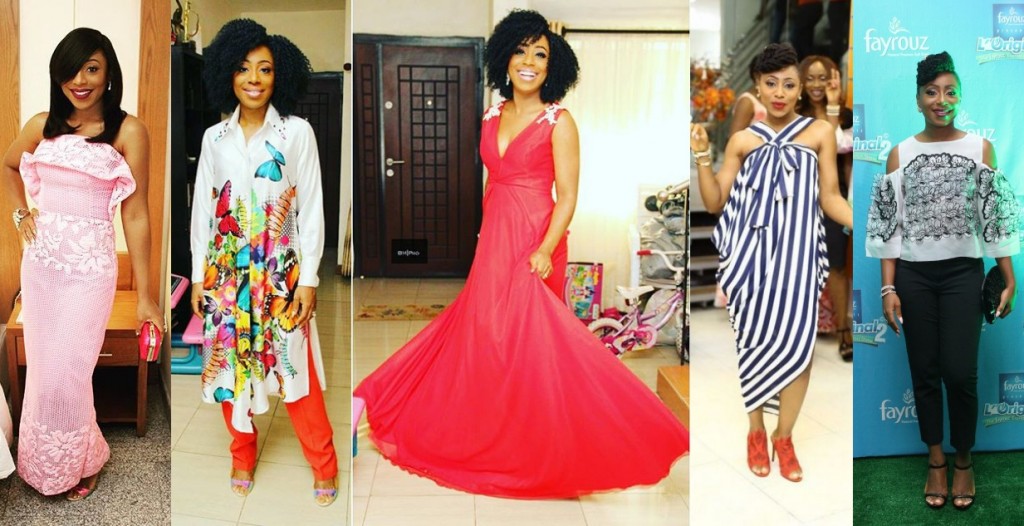 This yummy mummy knows how to throw on an outfit, twirl and become the belle of the ball. She is one of those people who are able to werk it effortlessly. She made motherhood look so fashionably good this year and we couldn’t help but notice. 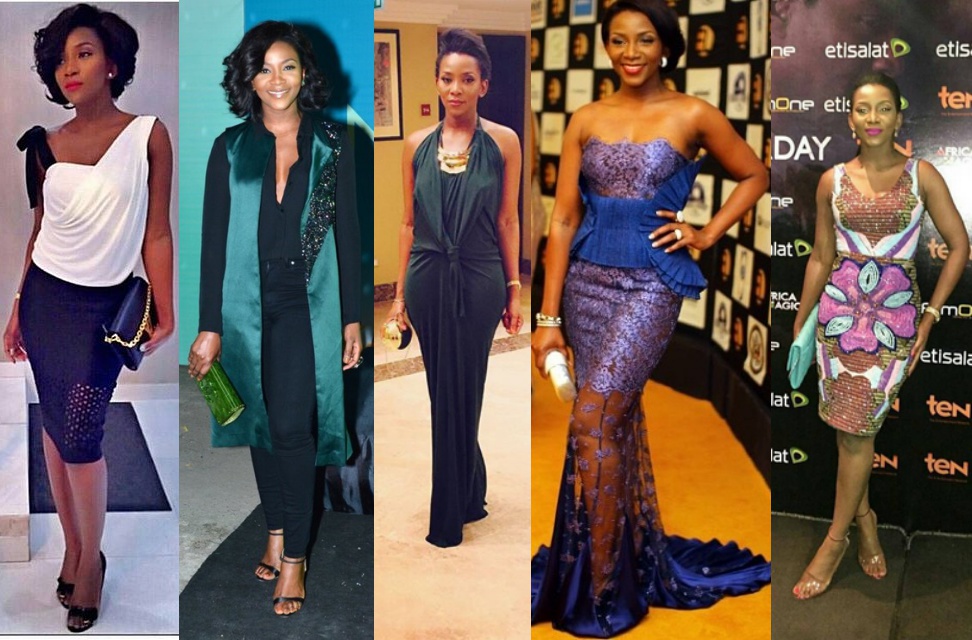 There’s a certain air of grace Nollywood’s finest, Genevieve Nnaji carries around with her. That she dresses impeccably might be a noteworthy contributing factor. Her style is clean and sophisticated, ultra-modern and classic all at once. We loved stealing peeks at her this year when she got out and about and more importantly, take a tip or two away from her oh so refreshingly clean cut style.

Sultry songstress, Yemi had a great year. From dropping hit songs to touring the globe, she managed to do all of that whipping out great outfits and looking effortlessly flawless while at it! With her signature pompadour and curves in all the right places, we’re anxious to see what she’s got cooking, fashion wise, come 2016. 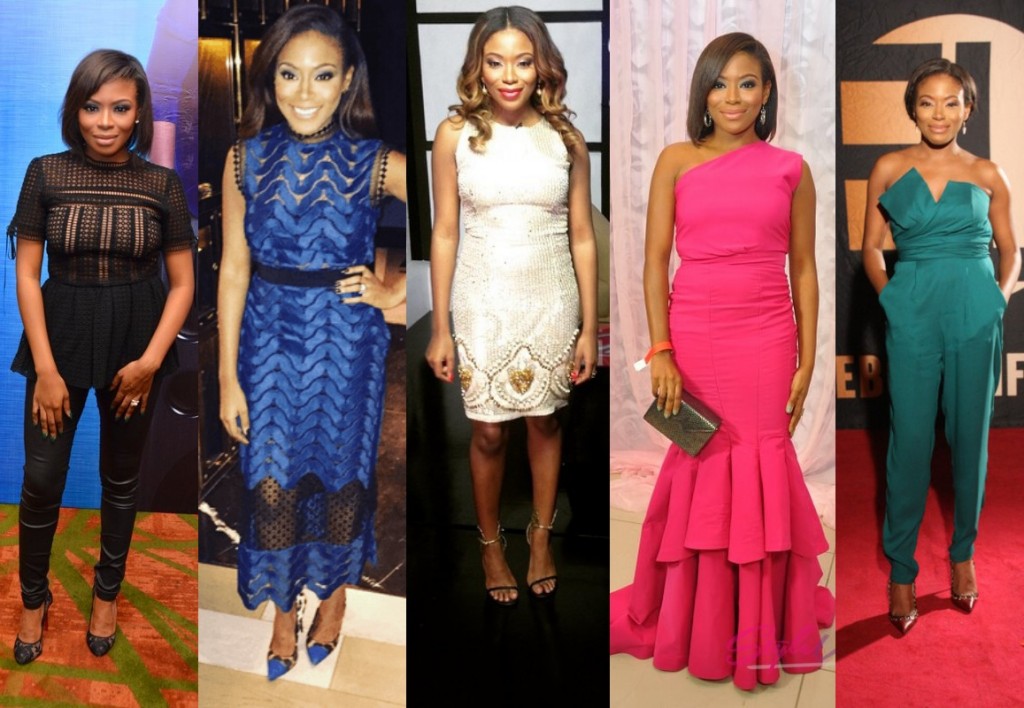 Spanking new Mrs. Oni-Sijuade did have her style moments this year – a whole truck load of them. We saw the talk show host slay on the red carpet, industry events, TV screens and best of all, her special day. With a disarming smile to boot, it was never boring with Dolapo this year and she fits snugly on this list, like she rightly should. 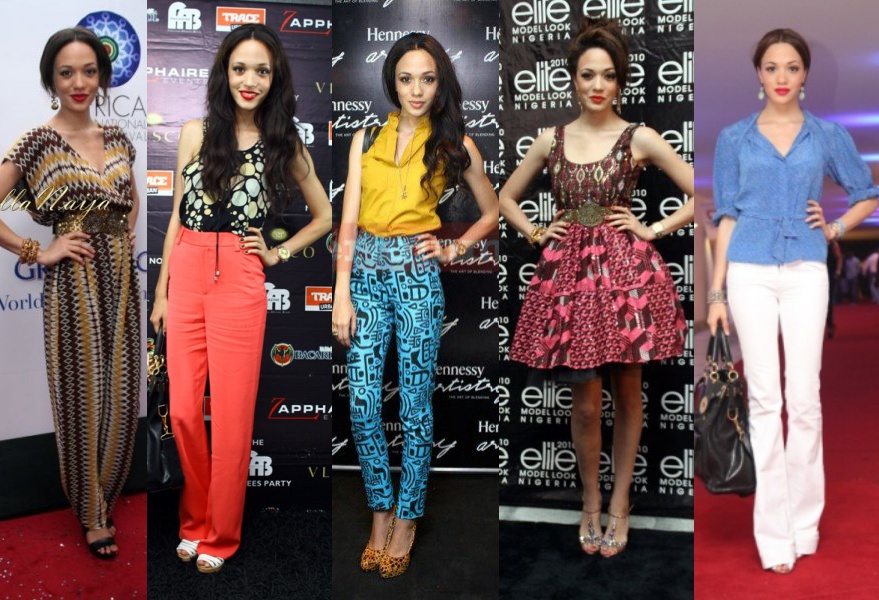 Doubling the queenly charms as a descendent from both Deltan and the Nigerian entertainment’s royal lineage, Eku sure made eyes pop and jaws drop with her regal ensembles in twenty fifteen. The lovely Miss Edewor worked the world like her runway and we absolutely love her for it. 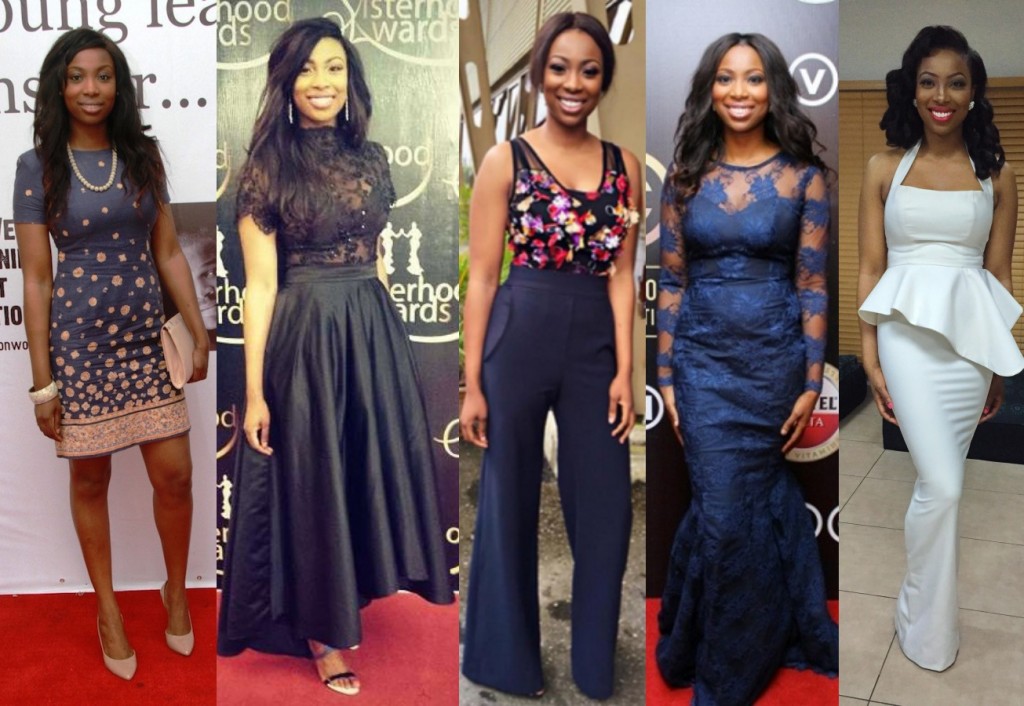 Bolinto, like she’s fondly called by everyone who agrees that she is amazing, has done a lot of growing up this year – even in her closet. We saw this young lady morph into her own woman and own it. She’s learned a lot thus far it shows and she continues to learn with the introduction of a new web show she anchors, “ On The Carpet with Bolinto”. Routing for her come 2016! 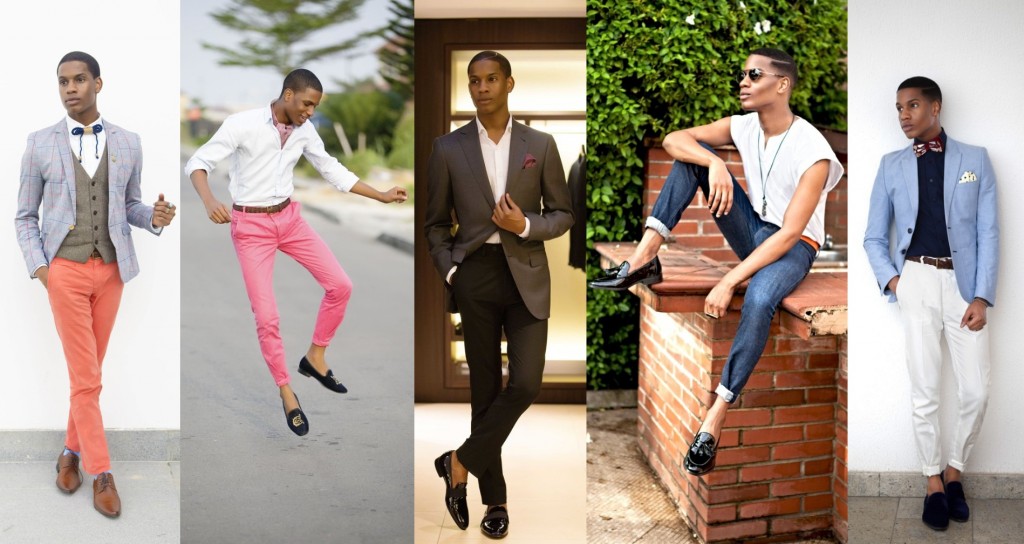 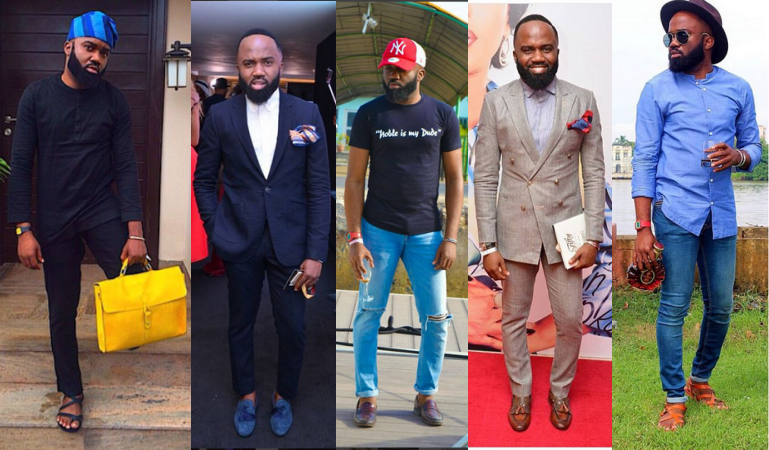 He does his name proud. With a beard game always set to fleek o’clock and a dapper style that has us checking back to see more of where it came from, Noble stands heads over so many others. 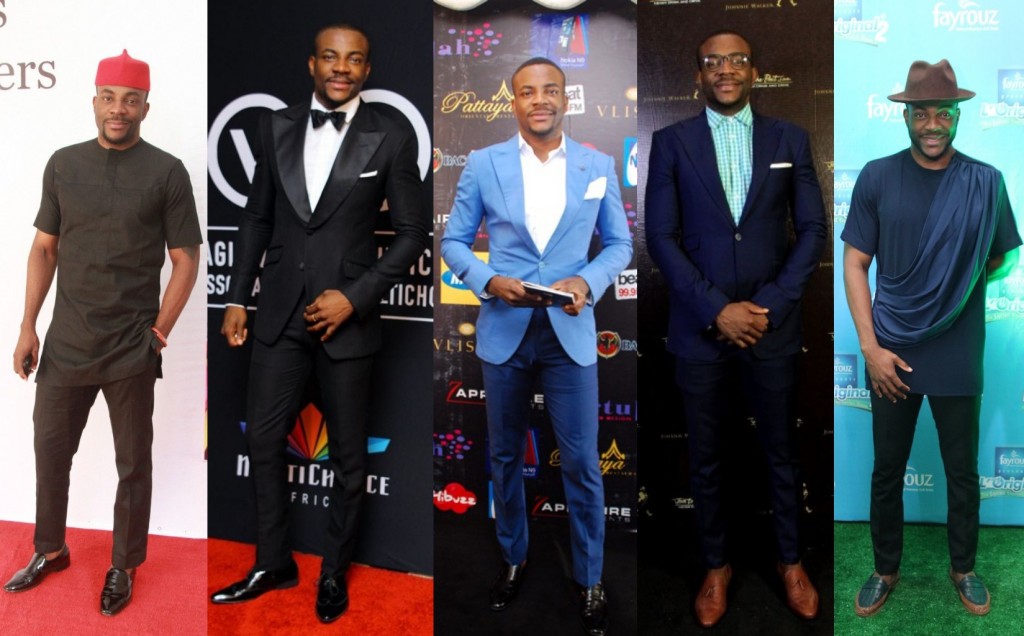 Yes, he’s now officially off the market but that doesn’t stop us from looking and admiring Ebuka’s smile sense of style. Whether he’s anchoring TV shows or gracing the red carpet, this spanking new hubby always hits the spot. Fashionably, of course. While it is arguable whether or not he looks great naked, we can all agree he looks striking when he does puts some clothes on. And thankfully, that happens a lot more than when he chooses to don his birthday suit for the cameras.

If Lolu was a word, he’d be suave. Other worthy adjectives will include clean and sharp — which both speak volumes of his sense of style. And again, he makes tassels look so good and masculine all at the same time. Doubt it? Just take a walk in his shoes!

Like fine wine, he gets even better with time. There’s something about RMD’s sense of style that, while we can’t seem to exactly place a finger on, works so well for him. It could be his designer stubble sprinkled with wisps of salt and pepper, the few rough edges that reek of masculinity or his wickedly dashing (and dimpled) smile. Whatever it is however, it certainly works. 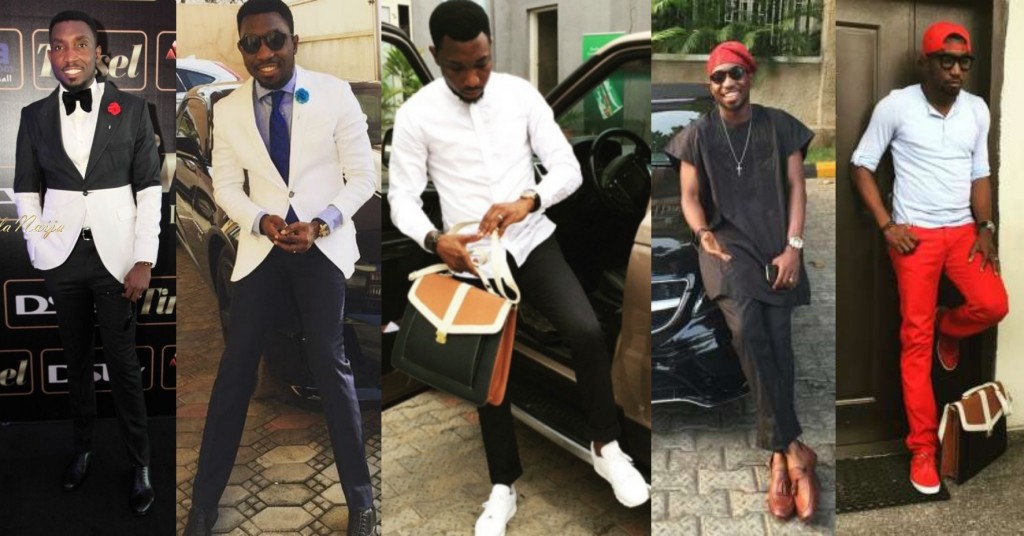 Timi seems like a really laid back person and his style could almost always pass for same — if it wasn’t so clean cut and bold you just had to pay attention. And like Timi, it is impeccable but not all up in your face, subtle and most definitely worthy. His “dapper” isn’t lost on us. As long as he’s got that suit and tie…throw in a fedora into the mix somewhere (plus a mad beard game) and tada! Mr. W takes this seeming regular and drab outfit (cause let’s face it, men’s fashion can sometimes get monotonous and boring) and ups it an ante. And no matter how many times he’s got to do it, he slays till infinity. He said it, he’s capable. And he’s consistent too. Gbenro Ajibade caused quite a buzz when he shaved off his ten year old dreads to marry his sweetheart and fellow Tinsel star Osas Ighodaro. But then shaving off the dreads didn’t affect his fashion sense one bit as he has not stopped mesmerizing his female fans with his good looks and great taste when it comes to grooming. 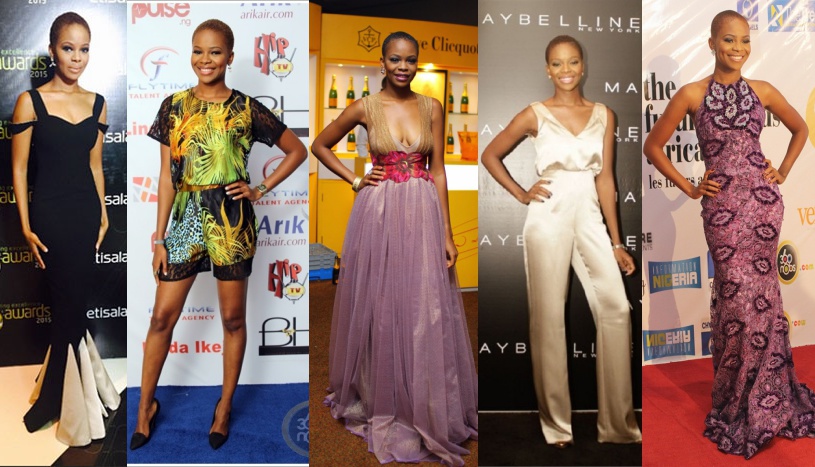 Zainab Balogun is bae. She really can do no wrong. And we love her style for all it is — whatever the event or her mood at any given point in time. Sightings of her at movie premieres, concerts and a host of other events, Zainab sold us that cool, calm and collected chic style that we have come to know and love her for. Mercy has made a habit of always putting her most fashionable foot forward wherever she goes. She’s a show stopper and a head turner all at the same time. She’s gotten so good at upping her A-game that she dishes out advice to some of her fellow colleagues who are in dire need of it. The universe thanks you Mercy. Edgy and never too shy to try out something bold and daring, Seyi Shay had a year full of a lot of hits and misses – but she certainly always picked herself up and hit again. With a new stylist added to her camp in the past year, she reeled out interesting and sexy outfits that didn’t just get tongues wagging but worked when all, finally, was said and done. 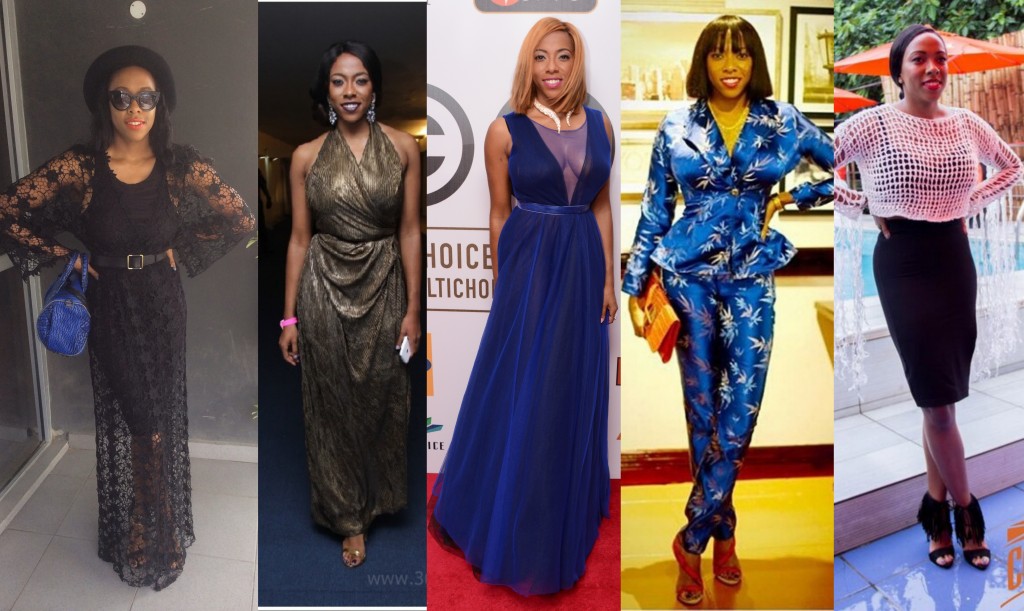 Everybody loves Fade! And almost everybody can agree that she has her finger on the pulse of fashion, trends and a personalized style. Fade was a delight to watch in 2015 and like her career, we can’t wait to see what she’s showing in 2016. The 60s called and it loves what Temi has done with its clothes. Temi, is in her own world and if there’s anything she’s done perfectly well – is remain consistent. While Temi’s style comes across as many different things to different people, it surely is in a class of its own. Beautiful and talented actress and mother Somkele has a great fashion sense and she knows it. If she’s not covering the academy awards with her very own style reportage on Instagram, she’s throwing it down all by herself. The world is her runway and boy, does she strut! 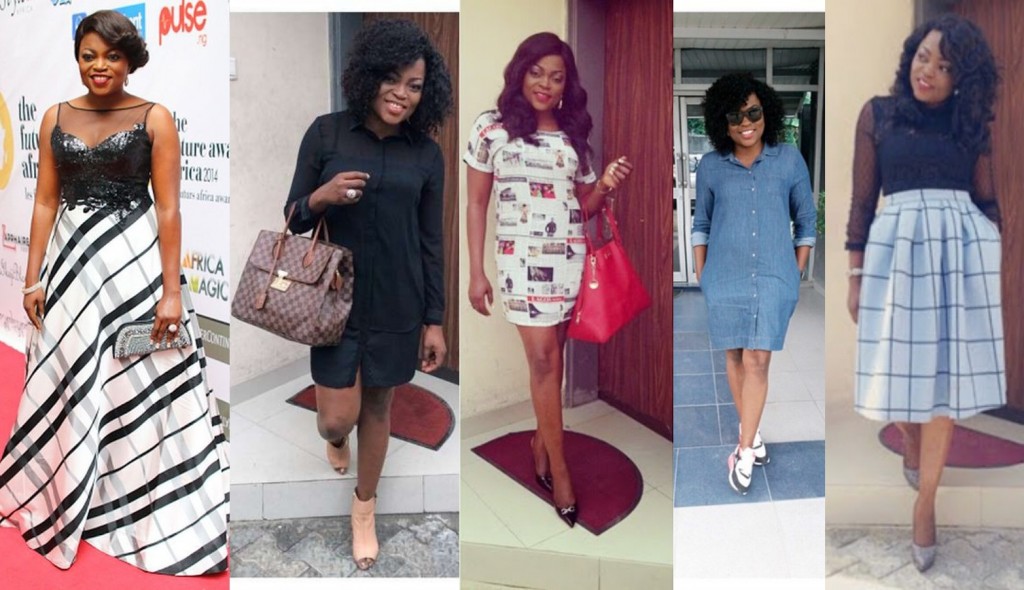 They say that Taraji P. Henson is Funmi Akindele who grew up in the city. That might be true. But PSA: Funmi definitely trumps Taraji style wise on the style streets in these parts. Funmi got better and better with every event and red carpet she was on. And now we’re starry eyed. 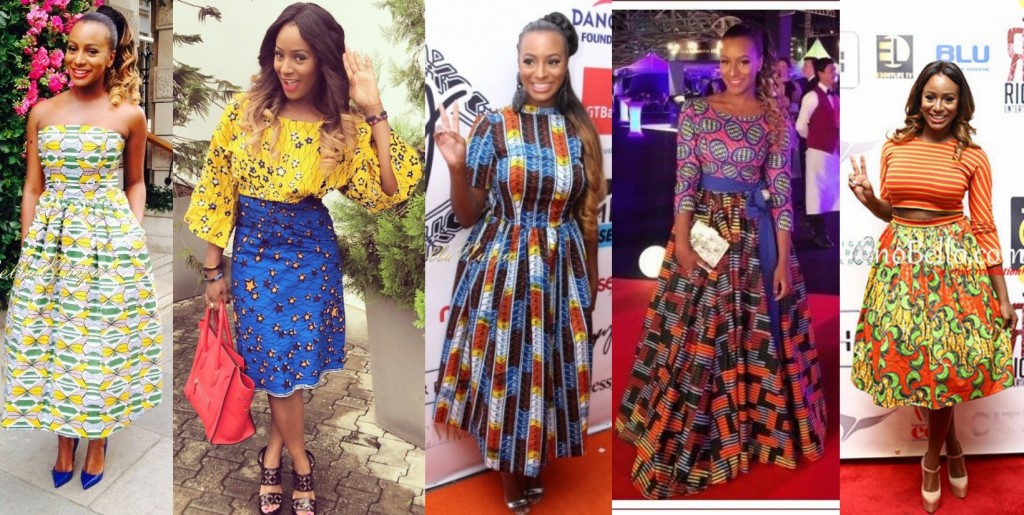 She’s mastered the art of spinning turntables and also perfected her mastery of looking so fab in the process of doing so. Her style is young, like her, and confident — always managing to pull of looking sexy without baring too much skin. And her style is a favorite for so many because of this. Tania is a piece of art.