I only recently started thinking it was important to make behind-the-scenes videos of my photography sessions. I hardly, however, make time to go through the footages simply because I find it uncomfortable looking at my self on screen and for the obvious fact that I sound weird and embarrassingly loud when I shoot.

On Saturday however I sat with filmmaker @emaedosio as we combed through go-pro footages to see if we captured the very moment. Olajumoke a bread hawker from the Sabo market bakery, walked entirely by coincidence unto our set of our Thisday style shoot for @tiniegram. The moment didn’t look special at all. If anything, she stood there a little confused. Some people asking her to leave the set and others asking her to stay. I signaled if it was ok to take her photograph and she agreed and I pressed on my shutter so she could move ahead. My main subject of interest was the Okada driver that had slowed down just before she arrived.

Okada riders have that cool Lagos vibe and always happen to add a bit of swag to street portraits. I was wrong to have paid her such little attention. Every frame with her in it was perfect. I had found a second subject in the Tinnie’s story. A young beautiful hawker who could have served as a love interest of some sort. Digitally, I made the red in her dress match @tiniegram sleeves to create a connection between them. When the magazine came out last week and the images hit social media, I was proven right. This girl split the limelight with the main subject effortlessly. Questions and comments started to fly: Was she a model? How did we convince the model to balance all that bread on her head. The buzz about her multiplied when I clarified that she indeed wasn’t a model at all but simply stumbled on our set. I immediately begone my search for her.

If so many felt she was beautiful enough to be a model, then maybe she was meant to be one. I was going to find a way to make it happen. I had assistants leave word with people in the area we shot her and to my delight the very next day, she showed up at my studio. 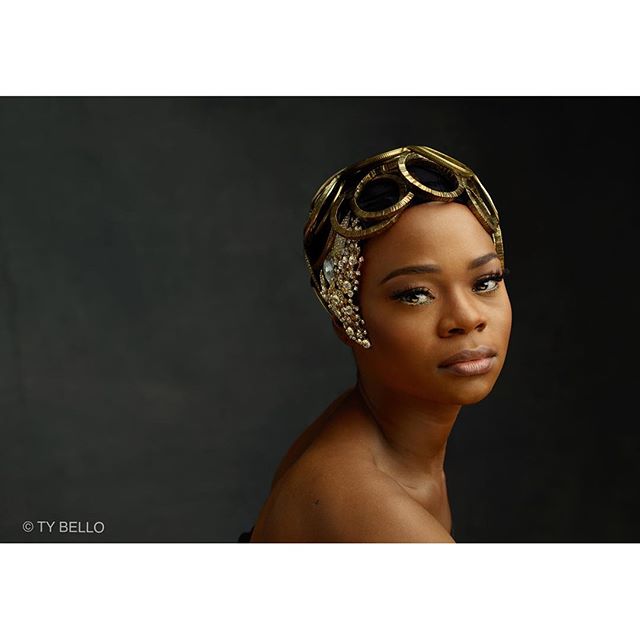 ‘Aso kan na ni mo wo kiri Lana.’ Jumoke, the ‘model’ the Internet had been searching for speaks almost no English. She explained how she had worn the exact outfit in our photograph the day before and someone showed her her own photograph on his phone from Facebook. A mallam led her to my studio that morning. She narrated her journey to Lagos- hair stylist from Ire in Osun state but not making enough profit between she and her husband who is a sliding door installer from the same village, to care for their two young children.

At the invitation of a distant relative who knew someone operating a bakery, she relocated to Lagos with her 14-month-old daughter to give bread hawking a try, leaving her husband and older 5-year-old behind. As I listened to her, I wondered if the beauty I had seen on my screen as I edited my image was a fluke, well until she smiled, then I realized that I was wrong. I had in fact underestimated the beauty of this 27-year-old woman. As always, it was her eyes and of course her perfectly chiseled features that jumped out at you when she chuckled. This lady belonged in front of my camera.

After a conversation with her husband telling him the story of our meeting, I decided I was going to photograph her that very afternoon. Within an hour, Bimpe Onakoya, one of Nigeria’s leading makeup artist and Zubby one of my favourite hairstylist, were at my studio to work magic. They had both followed the story online and were more than happy to put in their very best for her. Olajumoke, with curly extensions out, revealed a short natural Afro that beautifully hugged her face. @bimpeonakoya also had decided to keep the make up minimal. She stepped in front of my camera and I almost couldn’t recognize her. She moved different too. Jumoke looked straight into my lens emoting like she had done this all her life. I knew we had found a star. 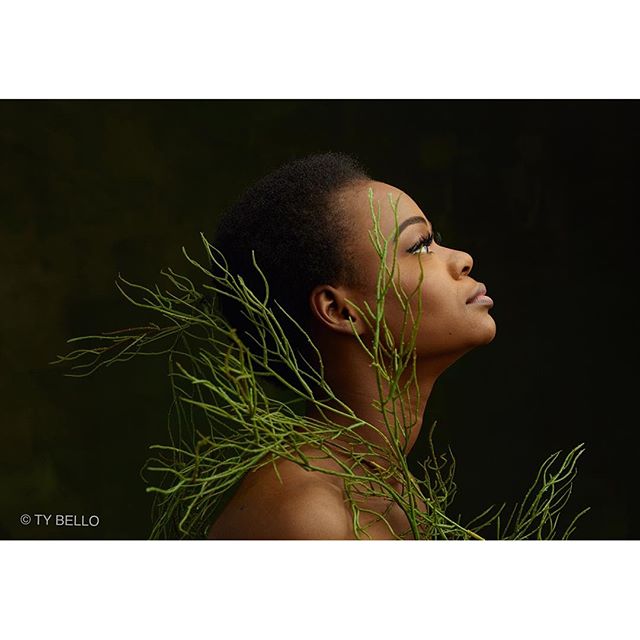 During the course of the day, @emaedosio who was making a short documentary about the process had asked her what she really wanted to do . ‘Ka ma kiri Buredi ko suwon’. She explained that bread hawking wasn’t the most profitable business but it puts enough food on her table. It also puts a roof over her head. Howbeit a roof she shared with scores of other hawkers. She was a trained hairdresser back in Osun state but her family could not afford the necessarily ‘freedom’ ceremony; a passing out ritual that gives a trainee a, sometimes, unwritten permission to start a full fledged salon.

We all decided that the make-over would be incomplete if it ended at the studio. Every one started to reach out to their contacts and through Bimpe we were able to get her a meeting with Ugo, the pioneer of Make-me salon. As a result of the buzz she generated from the Thisday cover, our model is now close to starting an internship at @makemesalon and has been offered an additional internship with @sarisignature, a famous Lebanese owned salon on the island. To pay Jumoke her model fee from her first job in front of the camera, we called @_ujumarshall, one of Nigeria’s and matched her fees. She’s been offered a modelling contract with the help of @godsonukaegbu from a  @fewmodels. She’s also had @payporte reach out to her to be model on their next billboard campaign. This is clearly only the beginning of another chapter in Jumoke’s story . Though it seems accidental it’s clearly Divine. Just this morning, a mentor of mine offered to foot the bill for her accommodation and education as well as her child’s. This finally makes it possible to be finally reunited with her husband and older child. 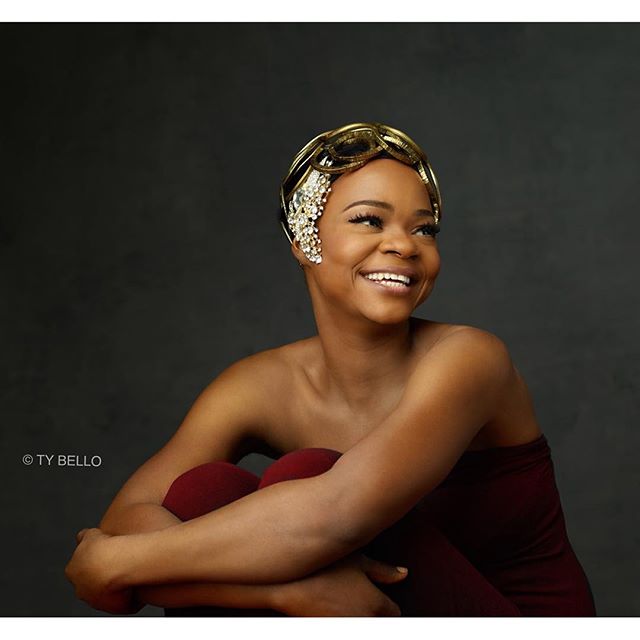 I’ve asked my self over and again why all of this is happening. One thing is clear, this woman here is no charity case. We met her in the middle of her hustle. The woman works hard. Seven days a week; with a family to support. But with dignity; who pays that much attention to how she looks as she’s about to hawk bread. Arranging the bread so delicately like it was worth much more, making sure she left the bakery while it was steamy and hot. Every body likes their bread hot. All of this, even when it’s clear that her profit in a day is between N300-500. 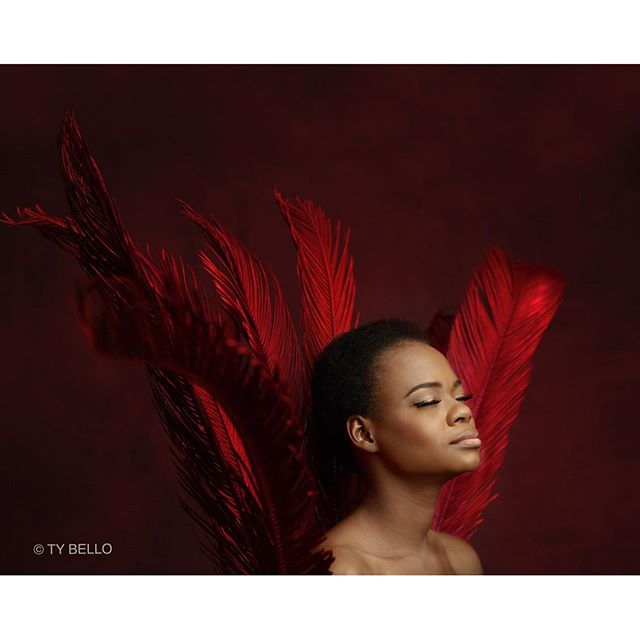 This is the story of so many Nigerians. The young hawker selling gala in traffic, the woman braiding hair under the bridge, etc. Nigerians work hard and we do it with style. This has taught us a lot and I hope everyone reading this would pay a little attention to those clearly working hard around us. You may have your own wahala to deal with but nothing gives you a bigger break from your troubles than just making life easier for someone else. Give an orange seller a N1000 note and she may be able to take the next day off to attend to herself and her children. 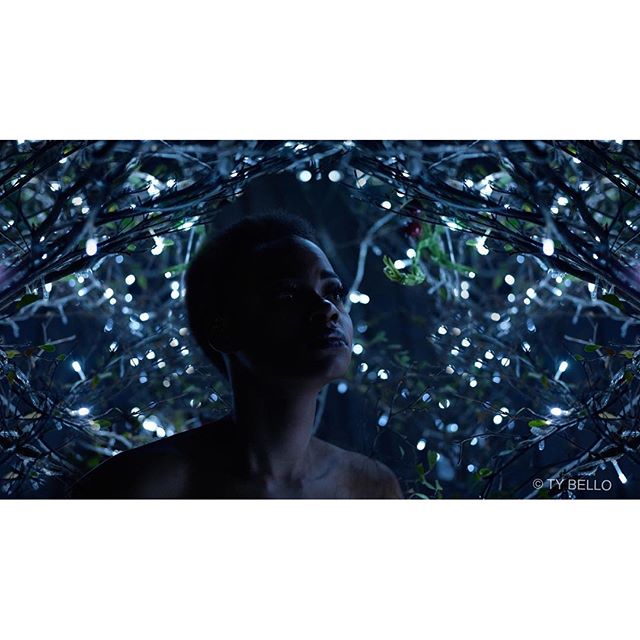 Jumoke is sorted. I personally believe so with all the doors opening up for her but This story is more about the ‘Jumokes’ around you . Who put in all the work but just need a little push. You may not be able to help every one but as I learnt from someone I really respect, in your own unique way do for the ONE what you would have liked to do for ALL.

Jumoke ooo! wants to be a hairstylists but secretly nurses a fantasy to act in a Yoruba film one day. I know she’ll be a nollywood hit. She did great in front of my camera and understood how to work the tiniest emotional nuances. She may not speak much English but can read and write in Yoruba. @kunleafo can you hear! So here, she is our #olajumoke and she can now be contacted and booked with @fewmodels.

She’s an amazing model. Wishing her all the best.

We tried tape contouring so you don't have to

TY Bello’s Take On: Davido – The Love Story Of Art

TY Bello’s Take On: Chief Olopade – How To Look When You Turn 90

Ty Bello’s Take On: Deola Sagoe – The Spirit Of Freedom