Ever wondered how Nigerian designers make their money from season to season? Fashion houses are grappling with a difficult retail environment as they continue to fight increases in the prices of the raw materials, customs import tax and brand loyalty.

There’s been an ongoing debate questioning why Nigerian designers aren’t affordable. The answer could lie in the fact that the brands have no other way to break even than to pass along prices to customers. Prices that were incurred from the cost of production, the taxes, the diesel and petrol that generates electricity to run machines- all costs the Western designers don’t have to think about.

Every other year, a new fashion week emerges (LFDW, Arise Fashion Week, Plus Size Fashion Week) but despite the global excitement around contemporary African designs, the industry is still struggling with mass patronage.

Many Nigerian designers still struggle to find a reliable customer base, which in turn means they struggle to raise the capital to produce next season’s collection. “It’s something of a chicken-and-egg situation,” says Nisha Kanabar, one of the founders of the digital showroom Industrie Africa. “What we want is to see a greater representation of the continent’s diversity on racks, in magazines, in closets—just more regional support to flesh out the ecosystem that we do have in Africa.”

For self-preservation, most designers only make clothes based on orders rather than for mass retail. This explains why designs applauded on the runway at fashion week only show up later on a few social media posts and then disappear.

Nana Tamakloe, fashion entrepreneur says we as consumers need to be loyal. He feels wearing African fashion in 2018 onward should become a symbol of strength and should be a respectable act like that of those that fought for our independence.

Tamakloe is leading a campaign to encourage more people to patronise African designers. “It’s enough, we can not continue to live in a society where we pack up African fashion shows and clap for the top African designers throughout, whilst dressed in our Louis V and Gucci’s, knowing very well we are going to go home and live the rest of our lives wearing just that,” Tamakloe said.

But one consumer leans on the chicken-and-egg situation, they want to wear made in Nigeria fashion but they cannot afford it. “My stake is on casuals, Deola Sagoe’s polo t-shirt cost N22,000 the last time I checked while Ralph Lauren’s polo is $70 to $100 which is between N10,000 to N14,000 so please which brand am I supposed to buy? Let us be realistic with prices on many occasions it’s not about the label after all.”

Emmanuel adds: Nigerian fashion is out of touch with the reality of the Nigerian market. We have a country where 70% of the population live in poverty, and 30% of the remaining population are unemployed. Of those who have jobs, 90% of them are underpaid. That leaves a small market of high income earners whose tastes are more geared towards foreign brands. The success of nollywood and the music industry come from the fact that, though flawed, they are in touch with the masses. Nigerian fashion should take a cue from our movie and music industry. first create appealing products for the masses and as the economy and the fashion industry grows, luxury berands will naturally emerge. Right now, we are running in circles round a flawed business model.

But Polo Luxury Executive Director Jennifer Obayuwana thinks differently. She knows that the buyers are there- if you know where to look and what to offer. “Nigerians are very brand-conscious, so it’s harder to sell an emerging brand. Right now the Gucci Dionysus bags are selling like hotcakes,” she explains to Forbes.

“Our prices are comparable to Europe. That’s the pricing model we’ve adopted as we don’t believe it is fair to penalize the client by piling up the costs. I’m happy about traffic. We’re seeing this emergence of upper-middle-class Nigerians who spend $1,000 to $2,000 per visit on shoes and handbags. These are the clients that come back every month. Then there are also the high-net-worth individuals who may spend up to tens of thousands of dollars.”

Author of The New African Fashion, Helen Jennings, feels the absence of mass production and retailing is not necessarily a negative thing. “African fashion is a very ethical industry because it’s very small in real terms. And I don’t think it will become like Asia. At the moment, every designer has their own workshop, they make their own clothes, they’re using local materials – a lot out of necessity more than anything else but it does mean that every garment has a story. Western fashion is finally – slowly – waiting up to the fact that these things are important and Africa actually has that.”

Poor infrastructure and lack of support mean there are still enormous challenges for designers (coping with only a few hours electricity a day) but Nigerian desingers are getting there. 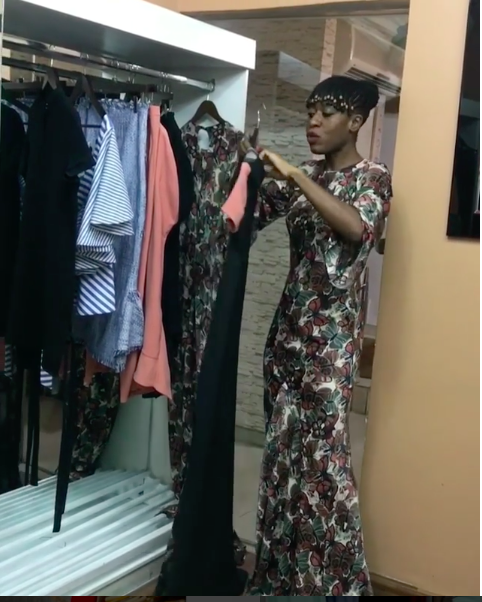 Tutorial: How to create the "No Makeup" makeup illusion look

Wazal’s Ova Tete is hot on the agendered fashion trend

Fruche and Morafa team up for the interesting ‘Caught in motion’

Why do we still wear suits in this climate?

Models.com is knocking on Africa’s door