Since taking over as artistic director of Louis Vuitton men’s wear collection in March 2018, Ghanaian-American fashion designer Virgil Abloh, 37, has worked hard to take the brand into the future.

During his show at Paris Fashion Week, a documentary was aired, there was also a note titled “The Vocabulary According to Virgil Abloh distributed which included Abloh’s personal definitions of fashion terminology (e.g. “collaboration,” which he pointed out there would be none of for SS19).

Before the show, a T-shirt was placed on the seat of every guest. This was significant to Abloh’s humble beginnings. As he said in an Instagram post before the show, “like some kids today I started the surreal mission without “fashion school” but a blank t-shirt, a screen printed idea for it and a dream.”

A live band called the BADBADNOTGOOD played music during the catwalk show including instrumentals of Kanye West’s music.

Virgil wrote on Instagram before his show, “The biggest goal for a first collection in any scenario is to start so that people can understand the new vocabulary.”

As the first person of colour to hold the position of artistic director at Louis Vuitton, Virgil Abloh first Louis Vuitton collection cast 17 black models for the runway. They included friends and associates from the rap and skating world like Kid Cudi, Theophilus London, A$AP Nast, Blondey McCoy, Steve Lacy and Lucien Clarke.

In the show notes under ‘R’, Abloh defined rainbow as “A kaleidoscopic palette evolving from off-white to polychromatic, synchronously forming a holograph archway known to represent dream. A motif in The Wizard of Oz, which provides construct to the Spring-Summer 2019 collection.” 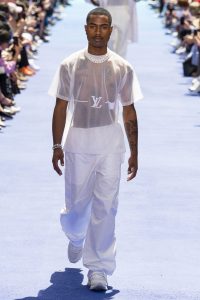 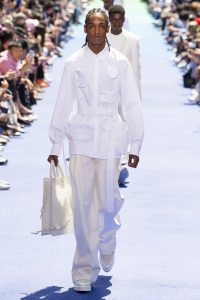 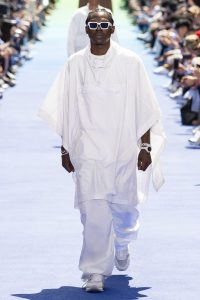 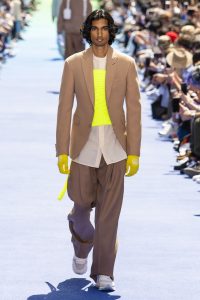 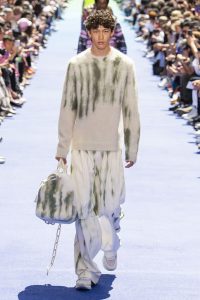 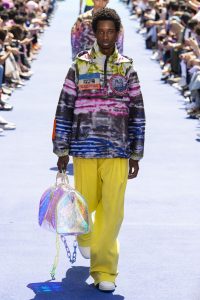 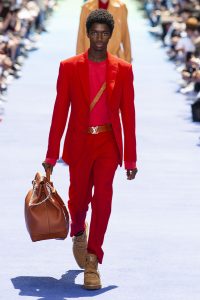