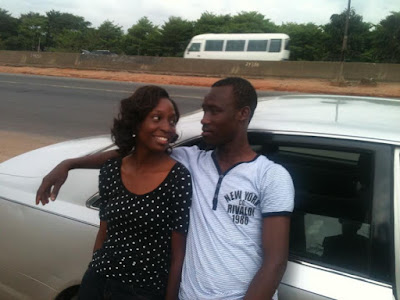 Bisola and Olabisi Phillip  are both lovers of God and what’s even more beautiful about them is the way they cherish each other.

Phillip and Bisola met in the Varsity several years ago when they were both jambites.

For Phillip, it was a love at first sight encounter but he had to take his time to woo Bisola.

They first met at the Redeemers’ Univeristy Chapel during a Workers’ in training programme.

When Phillip saw her, he lost his breath, he was encapsulated by her beauty.

“I couldn’t think straight, my mind was focused on this beautiful easy going student. The best part is that, there is an aura she carries around her that sends jitters down my spine.”

Apart from her beauty, her simplicity and desire to know God also added to the point of attraction. He admired how much she longed for God!

As fate would have it, they ended up joining the same workers’ unit (the Bible study unit) after their workers in training programme ended and Phillip seized the opportunity to draw closer to her.

“It was love at first sight but because I had stayed almost 6 years without admission, I made up my mind not to have anything to do with girls but Bisola changed everything. She stole my heart, and I knew she was the one for me because no other lady had ever made me feel the way she always made me feel.

I didn’t ask her out immediately until first semester in 200 level. I knew she was seeking to know more about God so I used brother-sister rhymes for her”

They would discuss the scriptures together, hold Biblical meeting, pray together and all.

After a while, Phillip couldn’t bear it anymore…he wanted to run away with this angel and spend forever with her. He was ready to marry this one woman that always makes his heart leap for joy and send shivers down his spine.

But he goofed somewhat.

“I wanted to marry her cos i was done with playing with girls but I jumped the gun and i was disciplined by the Varsity’s Chaplain. In RCCG, before you tell a sister you want to marry her, you must first tell her pastor before you even approach herbut i was impatient, lol”

Anyway(s), things soon got back to normal between them.

He officially asked her in December 2010 but it wasn’t until March 2011 that she accepted to be his órente.

And then, in August 2014, Phillip asked her to marry him and be his end and his beginning!

The lovebirds will walk down the aisle soon and we can’t wait to feature their big wedding, whoosh!

This Mother and son dance will melt your heart (watch)