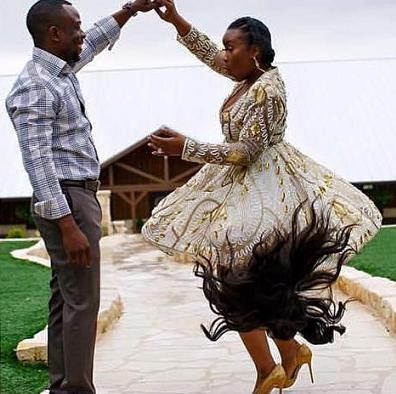 A few weeks ago, a couple’s prewedding shoot went viral after the soon-to-be bride’s wig fell off her head during the shoot (HERE).

Well, we now have their love story and it’s amazing, it will make you cry!

Her side of the story….

I strongly believe that for those who love God all things work together for good, for those who are called according to his purpose. – Romans 8:28

I remember the day like it was yesterday when I first met Hilary. It was NEW YEAR’S EVE 2009 at an event space called Redeye Lounge. I was a lover of the club scene back then and that was my thing. This was definitely before my Jesus days started. I saw a girlfriend that used to shop with me when I worked for BeBe and she walked in with her boyfriend and his friends. Hilary just so happened to be amongst one of those guys.

I chatted it up with my girlfriend and a few moments later Hilary tapped me on the shoulder and said, “MY WIFE!” Of course, I laughed because every Nigerian man uses this line. It didn’t phase me at all. However, I’m a sucker for smiles and his smile GAVE ME LIFE. Although he was short, the fact that he made me laugh was a HUGE plus. So we danced the night away and brought in the New Year together. He asked for my number and I obliged.

Hilary and I never really had a MAJOR first date. I would go to his place and we would watch HGTV because he was in the process of purchasing a home. Plus we watched all the other television shows he recorded on DVR and I would watch him play video games. His place was where I would go when I didn’t feel like driving home to Frisco from my late night club shenanigans. Just to emphasize on how much I partied, his friends had a nickname for me, “Hip-hop hurray the party planner!” Now, don’t get it twisted, we never slept together and that was a great thing that I discovered much later.

I really liked Hilary! In fact, I actually told my dad “I think I met my husband!” But my fast pace life style and many distractions at that time kept me from really getting into a serious relationship and truly getting to know Hilary. I personally don’t think either one of us was ready for anything serious. I also thought Hilary was sort of BORING and he was a BUG-A- BOO…… So after sometime I actually just stopped answering his calls. Once again, I had A LOT of distractions. Thank God for the Lord’s love, mercy and grace.

Interesting enough two years later I ran into Hilary at a NEW YEAR’S EVE service at Christ Embassy Church in Dallas. I know, I know… Something must be real special about New Year’s Eve! I was sharing my testimony and spotted Hilary in the audience. That made me a bit nervous because I had not seen him in a very long time plus my life was completely different from the last time he saw me. I had fallen in love with Jesus and I hoped that he wasn’t having memories of the old Jessica. We briefly chatted and he jokingly asked, “So this is where you’ve been hiding?” I laughed it off, but we left it at that. It was just a good seeing you thing.

I kept running into Hilary at Christ Embassy because his good friend attended that church as well so anytime there was a baby dedication for his friend we saw each other. After running into Hilary for a third time, I finally decided to reach out to him and just ask for his number again. I must admit, he looked really REALLY GOOD this one particular Sunday and I made up in my mind that I wasn’t going to let him get passed me this time.

We exchanged numbers for a second time and shortly after we left church I text him to let him know that it was great catching up and good to see him. I also mentioned that we should hang out soon. He was up for it so a few days later we hung out at Shops of Legacy in Plano and we really hit it off. We were together all the time and everything just felt right except for one thing…… I wanted to change a few things about Hilary. Now remember life had really changed for me. I gave up the club life and started a women’s ministry so I became the church girl hoping to make my man into a pastor or we start some ministry together. Hilary wasn’t to happy about all my big plans I had for him so we clashed A LOT about it. I started to have doubts on whether or not he would fit into MY PLAN (not God’s). We prayed and fasted together and we sought counsel from a few spiritual mentors. I loved this man so much, I was just refusing to allow him to be Hilary.

After taking time away from each other, I knew I wanted to spend the rest of my life with Hilary. I missed his laughter and the way he made me feel and how I was able to be myself around him. I always experienced freedom and peace with him. Being with Hilary has always been a safe place for me. I started looking back over the past few years and how the both of us had grown and so much had changed about us and that is what gave me the most comfort to move forward in a relationship with Hilary. I knew that if Hilary and I ever got married we would forever be growing. Hilary will not be the same man 10 years from now. He will be even better than how he was when I first met him and vice versa.

Finally, NEW YEAR’S EVE 2013, Hilary and I decided to make it official. He told me that day, we are going to do this and sure enough we did. And two and a half years later, September 25th , 2015, he proposed to me in front of my family and friends. It was definitely one of the happiest days of my life. Hilary has been a huge part of my growth and my testimony. He has helped me become better and I thank God for him each day. I’ve learned to give up my control because only God has full control over our lives.
Who would’ve known that my life as a club girl actually worked in my favor of meeting the love of my life? I believe God kept the both of us in each other’s paths until we were ready to take the next step and ready to serve one another as husband and wife. My relationship with Hilary has taught me to accept people for who they are and respect the season they may be at in life. God does the changing and we do the praying. The more I prayed for Hilary the more things began to change not only in him, but within me as well. I strongly believe that for those who love God all things work together for good, for those who are called according to his purpose (Romans 8:28).

His Side of the story….

The Man Who finds a wife finds a Treasure, and he receives favor from the Lord. – Proverbs 18:22 (NLT)

It was New year’s Eve 2009 and I had gone out to support one of my friends who had an event space called Redeye Lounge, As I walked in the place it didn’t take long at all for me to notice Jessica as she had recognized a girl that was in our entourage and had exchanged pleasantries with her. I gave it a few minutes and walked over to her and said to her – you Know you are “MY WIFE”? Literally that was the first thing that came to my mind; we ended up hanging out and dancing together most of the night and at the end of the night exchanged contact information.

In the next year to come I was more reserved and didn’t party as much as Jessica, I was more of an easy going person and Jessica was heavy in the entertainment Scene and party planning, My two close friends Tony Odeghe and Ahmed Aminu Kadiri even nick named her “hip-hop Hurray”. We would hang out and it was casual and over time just remained friends and eventually lost contact with each other.

In 2012 at a New Year’s Eve service at Christ Embassy church in Dallas, I ran into Jessica and we exchanged greetings and had small talk, as it turns out over the next few visits to Christ Embassy, I discovered Jessica had given her life to Christ and was different from the “hip-hop hurray” girl I had met, she had matured into her own. This time I didn’t make any moves to approach her we would just occasionaly exchange greetings. On the Baby dedication Sunday of Tony Odgehe’s daughter Jessica comes up to me after Church and asks for my phone number, in the next few days we went out on a date and continued dating after that.

As we started dating Jessica wanted to change a few things about me and I let her know she would have to accept me as I am as well as God’s Plan for my life and her life as God has designed and not our design.
We took some time apart from dating, I missed Jessica and on a faithful night during that break I was home and Jessica called. It was late, she comes over and I see her and the look in her eyes when she saw me as well after a break of about 6 weeks and at that very moment I knew I was going to ask Jessica to be my wife for real this time.

In 2013 we made it official, we started dating and taking steps to grow in the relationship with one another, even did pre-martial counseling before any idea of proposing and on September 25th , 2015 – I took the next step, I proposed to Jessica asking her to spend the rest of her life with me and be MY WIFE – SHE SAID YES …..
Proverbs 18:22 (NLT) The Man Who finds a wife finds a Treasure, and he receives favor from the Lord.

Blazers, boyfriend jeans...5 must haves for the androgynous style lover