Holby City star, Chizzy Akudolu, 44 broke down in tears recently as she opened up about her shopping addiction and battle with emotional eating on the ITV talk show.

“Yeah, years ago, I used to shop a lot to the point I got into debt,” she said replying show moderator, Andrea McLean.

“Don’t know if it’s an addiction with food, but I was buying stuff as my therapist told me it was trying to replace love I was missing. All my family are brilliant, talking about partnership.’ 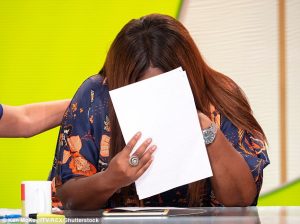 Then McLean asked what it felt like to get treatment for the problem, only for it to not work.

Chizzy wept as she replied: “I guess I just feel like a failure, I suppose. It’s a problem I have created.”

‘We will help you, it’s not a failure, success is not one big line,’ insisted McLean. Nadia Sawalha on the show also reassured Chizzy: “You’re too hard on yourself, you’ve made the first step and it’s an amazing step to take. Really brave.”

Chizzy also opened up honestly about her eating disorder. “I feel like I need a total refit up there [her brain], at one point, I wanted a gastric band. I really have just lost control now, started going gym that’s not gonna work if I don’t tackle food. I eat when happy, sad, good, bad news. I just turn to food.”

“I feel so addicted to the struggle. I love dieting, I can control something for a minute, but the dieting doesn’t work.”

“I do suffer from depression. I’m not ashamed to say that at all. It’s not something I asked for. It’s something I’m dealing with, I’m still on anti-depressants. I have therapy. I had quite a bit of therapy after Strictly. I just want to say that the show did offer me a therapist, I said, “No I’ll be fine, it’s just a show, just a show”. I did hit a massive low with my depression after Strictly.”

Jackie Aina in the latest installment of #GoToBedWithMe

Turmeric is the spice of the year! Here are all the ways you can add it to your daily routine