Comedian Akpororo recently proposed to his woman during a church service.

He popped the question during the first Sunday of the month (August) service, at the Ultimate Power Ministry.

An eyewitness narrated the incident thus 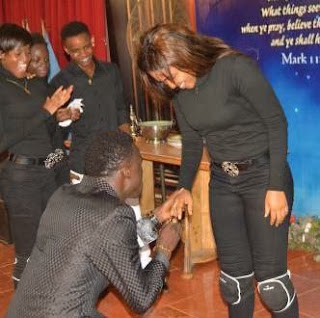 “The life changing anointing service did not come to an end without entertainment infused in between as some of house of the finest comedians trilled the congregation with unending laffta! The comedians at the service include, Shortfamily, Laffdoctor, Wiseone and Ovie (The generous). Akpororo was not left out as he cracked jokes and also performed four of his songs from his album. His joy knew no bound as he sang and danced as never before, nobody knew what his plans was.
However, somewhere in the middle of the whole activities (choreography, choir rendition and sermon) the comedian was no where to be found. Just as the  pastor  was rounding off the closing prayer, four children walked up to the altar with each of them carrying a cardboard paper, and when they got to the middle, they all turned to face the congregation as they open the cardboard paper with “WILL YOU MARY ME” boldly written on it. The whole church thought it was a joke, still, Akpororo was no where around.At that point, the Bishop in-charge of Ultimate Power Ministry, Bishop Isreal Mathew,  walked up and said, “one of my sons is asking someone here this question”.
Just then, AKPORORO walked up to the altar and knelt down in front of Jossy or Josephine (the only light skinned lady among the Explicit Dance Crew) and popped the one million dollar question, “Will you marry me”? with tears and smile of joy, Josephine said, “YES!”Aww! 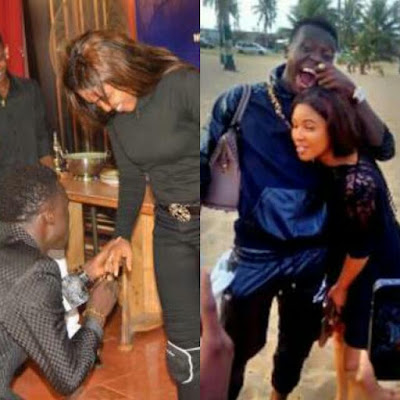 How a wedding guest's search for a photographer led her to Mr. Right

All The Fun From Nigerian Student Fashion And Design Week 2015