Named Passenger Overflow Areas (POAs), each has been built to provide fans with dedicated facilities to complete their FIFA World Cup Qatar 2022™ journey. At both POAs, passengers can safely stow baggage, enjoy a taste of the best international cuisine or relax in comfort and style while soaking up a football-themed atmosphere. In addition, the larger two overflow areas at HIA include a virtual reality gaming zone – a world first. There are also soft play areas for children and large screens to show football highlights.

To coincide with the opening, a Qatar Airways FIFA World Cup™ anthem recorded by internationally acclaimed singer Cheb Khaled and superstar DJ Rodge called “C.H.A.M.P.I.O.N.S.” has been released on the airline’s official YouTube channel and will be played onboard flights arriving in Qatar. The uplifting lyrics are sung in English, French and Arabic, and its catchy melody reflects the passion of all fans uniting across the globe in this shared experience.

Qatar Airways Group Chief Executive, His Excellency Mr Akbar Al Baker, stated: “Qatar Airways is all about offering global passengers the best industry experiences. Passenger Overflow Areas will accommodate thousands of fans at any time at our world-class airports. We’re dedicating the song “C.H.A.M.P.I.O.N.S.” to those fans and people everywhere, which we think captures the excitement that FIFA World Cup Qatar 2022™ represents to this country and region.” 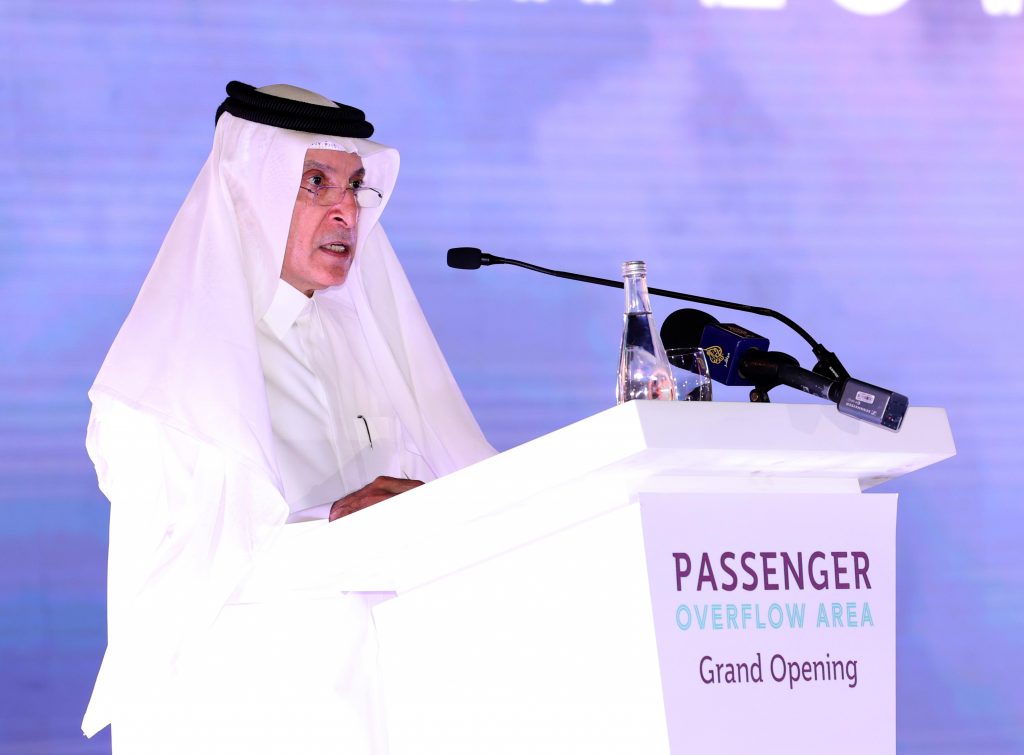 HIA’s Chief Operations Officer Engr. Badr Mohammed Al Meer said: “The commencement of the passenger overflow area at both HIA and DIA will offer our visitors a remarkable chance to experience the FIFA World Cup Qatar 2022™ at dedicated premises. Curated for all departing passengers, the overflow area is part of MATAR’s initial airport operations plan set to improve overall flow at both airports and accommodate thousands of visitors at any given time throughout the tournament.”

The spaces are open 24 hours a day, seven days a week and accessible via designated POA shuttles, which will be available from the airports and metro to seamlessly transfer passengers. Travellers can check in online and come to these spaces eight and four hours before departure.

HIA, ranked “Best Airport in the World” for the second year in a row by SKYTRAX World Airport Awards 2022, is preparing to welcome 58 million passengers annually. A stunning expansion was recently unveiled featuring a 10,000-sqm, lush, tropical indoor garden named “The Orchard.” Drenched in natural light and featuring sustainably sourced plants and shrubs, it offers passengers a show-stopping, luxury shopping experience with many first-of-a-kind retail outlets.

Fans travelling to the world’s greatest football show can find more information about the journey and the specially themed services on offer by reading the Qatar Airways travel guide.

Multiple award-winning airline Qatar Airways was recently announced as the ‘Airline of the Year at the 2022 World Airline Awards, managed by the international air transport rating organisation Skytrax.  The airline continues to be synonymous with excellence, having won the main prize for an unprecedented seventh time (2011, 2012, 2015, 2017, 2019, 2021 and 2022) while also being named ‘World’s Best Business Class, ‘World’s Best Business Class Lounge Dining’ and ‘Best Airline in the Middle East.

The 'Week of Italian Cuisine' in Nigeria Ends in Grand Style