The 8 years of dating wasn’t exactly a smooth and easy ride but their endless love for each other conquered all.

Back then, Bose would joyfully help her aunt sell recharge cards and handle her phone call business at her kiosk in front of the house.

So, one fateful day, this young man (Fasky) showed up to buy a recharge card and somehow, he couldn’t have his complete change; Bose asked him to come and get it the next day.

The next day came and when he showed up, he not only collected his change but also her phone number and their friendship started.

It blossomed even more courtesy of the MTN midnight extra cool promo which was in vogue back then.

Being a go-getter that he is, Fasky didn’t waste time or beat around the bush for too long. He poured out his mind and asked her out that same month doing one of their midnight extra cool conversations.

Bose apparently was in love with him but she didn’t give him an answer till January 21st, 2008.

And the journey began…

Challenges they encountered and overcame during the 8 years:

Distance was the major challenge. I was in School while he was in Lagos.

That same month I agreed to be his girlfriend, I  gained admission into the Olabisi Onabanjo University, far away in Ijebu, Ogunstate while he got an appointment with Telnet in Lagos.

Sometimes, I would need someone to talk to but Fasky will be busy at work all through the day. I would call him to hear his voice and he will just pick and say babe i will call you back and he won’t call till night. And sometimes when he called me, I might not be available and when we miss each other’s calls like that, we end up arguing and fighting.

How we overcame the challenge: We sat down and had a discussion. I know you are busy but just try to call or ping me to ”’what’s up” as often as you can so i know you actually care or even think about me.  I kept my mind busy by joining the Anglican church students work force, I  go to church, rehearsals and spent time with my friends in School. He also tried sometimes to come and check me in school and quickly rush back to Lagos.

Second challenge was anger, misunderstanding and disagreeing a lot. We disagreed a lot because at first he wasn’t always opening up to me, he would carry out some actions without informing me and i would be like”why didn’t you inform me, blah blah”, I like my guys opening up to me and he has really improved on that.

The last straw that broke the Camels back was when we had a serious misunderstanding for over six months in 2014.  It started April and ended in November.

We broke up. We parted ways and move on. All hell let loose!

I was miserable, depressed and hurt!

But somehow it was during this our fight that I noticed that he was my God ordained man and that I couldn’t date any other man.

While at loggerheads, he would still ping me once a while to check up on me or just say hello and i would do same. We still jokingly  mocked and teased each other yet during this fighting period.

Sometimes he will call me and say I want to see you and when I get there, we might not say anything reasonable other than tease each other’s new partners. He would be like “who are you dating now? Who’s that guy you used on your blackberry DP a few days ago?” and I would throw the same question back at him and vice versa, lol.

We felt we had moved on but funny enough, we still monitored each other’s blackberry display photos.

We thought the fight would not end, but six months later, we forgave each other.

How we made up:

We met at a friends’ naming ceremony and that day I was really looking beautiful. He complemented me and we realized we had missed each other. He took me to his house that day and we talked it over. We had a deep discussion. Why would we lose a beautiful 8 years relationship for a 6months fight?

The next month,  December, 2014, we had our wedding introduction.

Fasky proposed to Bose at his parent’s house. He got his mum to have her visit them that sunny Sunday afternoon and then he popped the BIG question.

His mum called me to come and help her get something and so after church I rushed down there, only to find a full house. Some of his family members and friends were present but i didn’t think it was anything serious.

After greeting mama, she was now like Bose, Fasky is about to ask you something and I want you to be honest in your response”.

I thought he had heard something bad about me and needed some clarification.

And on the spur of the moment, he showed up behind me and said “Temi” will you be mine forever”?

I never expected it.

The tears came pouring down. I was just crying cos it was beyond my wildest imagination, i didnt know the proposal would happen so fast, cos we had barely kicked off the relationship after the six months break up. I didn’t say a yea, hehe, but my uncontrollable tears said it all. Everyone was like “”aww, ehya”

….Two weeks  after the proposal, we had our wedding introduction.

How being married feels:

It feels good because I married my best friend, my brother, my father, my companion, my muse and my baby. Before i got married, I was the last born and i enjoyed certain privileges but now that i am married i am like a mother in the house, having to attend to my son. 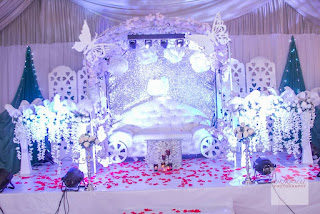 Poll: What would you wear if you were president for a day?