Ni Hao from Hong Kong! As I put together the Style Doctor series, this city which I have connected so deeply with was my very next stop.

Hong Kong actually means ‘Fragrant Harbour’, an inherent feature of one of China’s most densely populated cities. A city of style. This is the home of the legendary Sam’s Tailor sons, who have clothed world leaders and icons including Bill Clinton, Michael Jackson, Queen Elizabeth II, Ronald Reagan and many more.I had the honour of meeting mr Sam himself 5years ago when i visited HongKong for the very first time.

Hong Kong breathes so much passion and style that a sartorial enthusiast on a documenting journey is exposed to an overwhelming supply of geographic heritage. Come along with me as I tour the city of one of my favorite Jacki Chan movies ‘’Police Story’. Lets go!

Feeling holy today, so taking on the Wanchai Baptist Church in white pants and dark semi a casual Ouch shirt. Even though HongKong is an independent country, it still shares a lot of attributes with China such as traditional sentiments , so I decided to rock my traditional red cap, to match the colour of their flag. 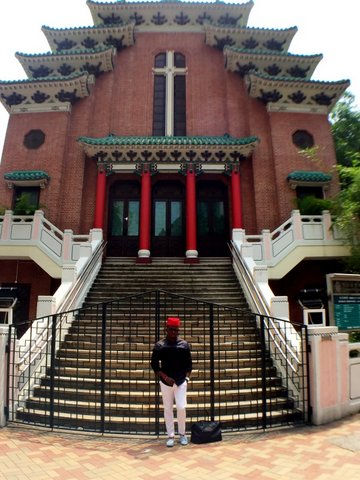 Stop for a sidewalk to wall shot, and keep moving. There’s so much to take in. 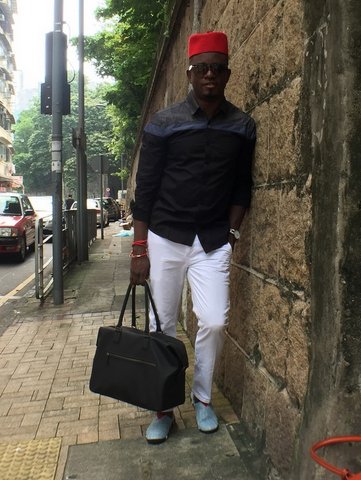 The Rotary hand. East side entrance of Kowloon Park. The Chinese love their hand gestures and a stylish man must respect this notion. This was a gift from the Rotary Club of Kowloon West. I pay tribute in sleeves rolled up on the snow white Ouch shirt, rolled up dark jeans and navy with brown kicks. With your head covered in the Yellow Ouch Libero…..now bow as you ball a fist. Channel your inner Shaolin. 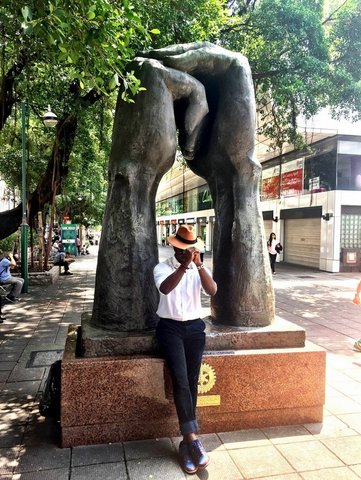 Together we climbed the stairway of melody, and we found the true sound of style. #MySatorialFriends

The city of Hong Kong gives you the feeling of being established for one endless photo shoot. It is a city of pictorial backgrounds and designs. Just pause, and get expressive at your most dapper. 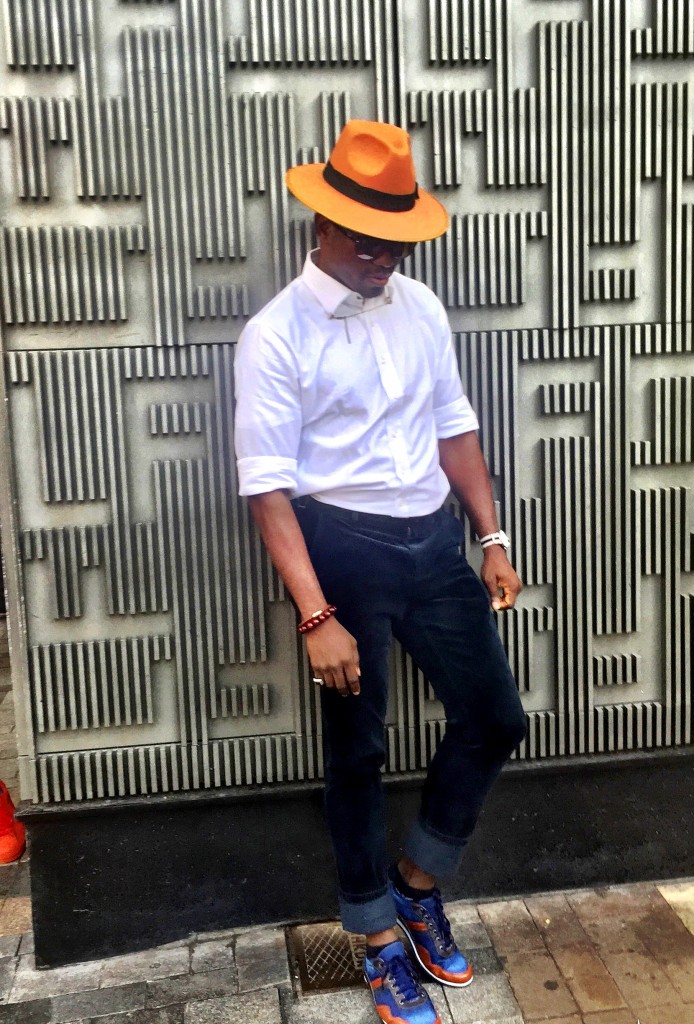 Taking a break from touring at the Victoria Peak Restaurant. Hitting the scene in style before it’s time to Chow. (This popular slang for food originates in China. From Chinese pidgin Chow Chow which means food)

Dare to go for chow in white? We are still keeping it traditional, so the African print pant puts the flash in the match of white top and white shoes. Look out Hong Kong, a pure African is in the streets. 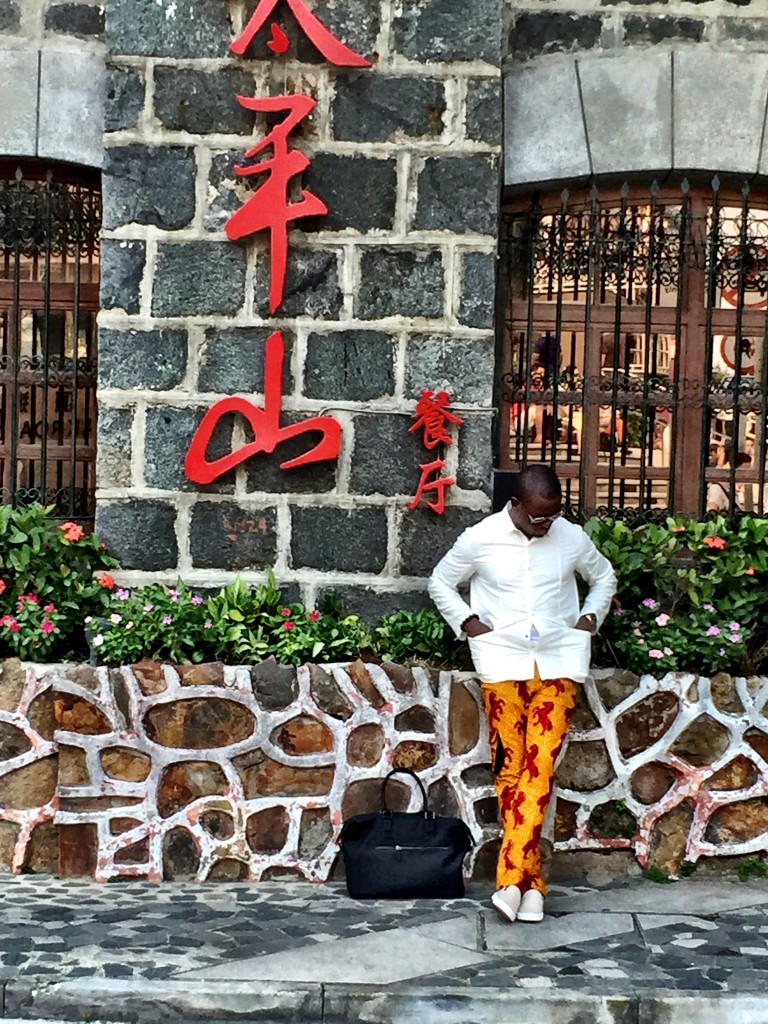 Immerse Yourself In Art. Proper dressing does not just make you a gentleman, it makes you an artist. 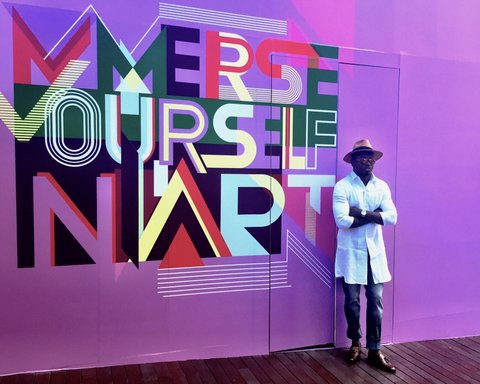 I am the canvas in white thigh length casual, Jeans and a Libero leather brown Ouch shoes with sweet soles to knock softly on the wooden floor boards.

In a city known for its Skyline,The PEAK is a tourist paradise, the tallest point in the city where you can literally have a breathtaking view of the entire city. you can spot the tourist in the shot. Fine clouds above mean it’s a good day to be fashionable. 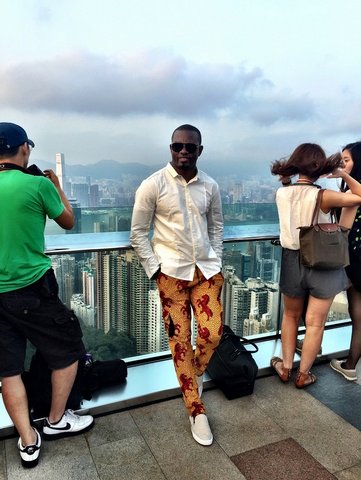 A day at the park. I got to Victoria Park rocking the eased up look. A man who emits comfort in style can take on the world. 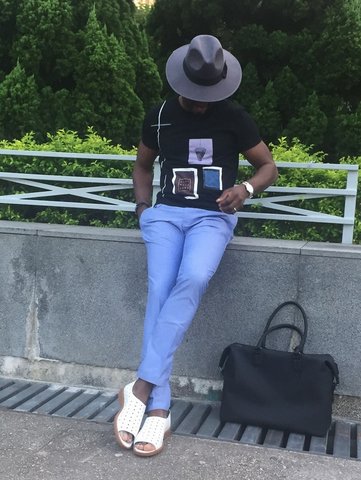 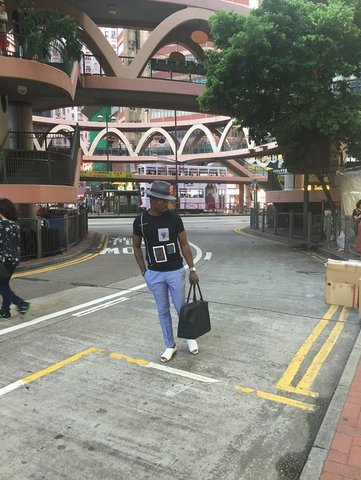 From the bottom, white peep toes for the casually styled man, sky blue fitted pants, black tshirt, and don’t forget the grey Libero by Ouch. Put your Ouch man bag to the side and blend into the scene.

In the spirit of switching it up, here comes the Aqua blue chinos and black casual shirt. Rock the traditional styled length shirt with a Libero for that country side appeal. I strolled blissfully through Pok Fu Lam park, and the white shoes gracefully worked its way through. 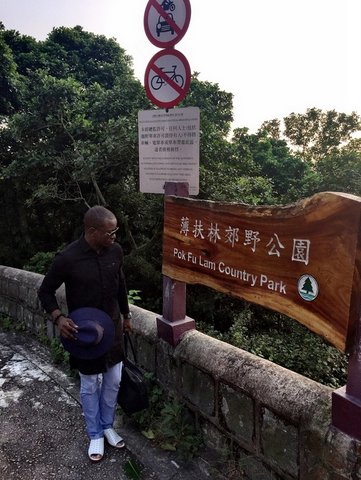 Art meets art, one with paint and the other with fabric. In both, the best of the elements are put together to show the world that simplicity is sophistication. 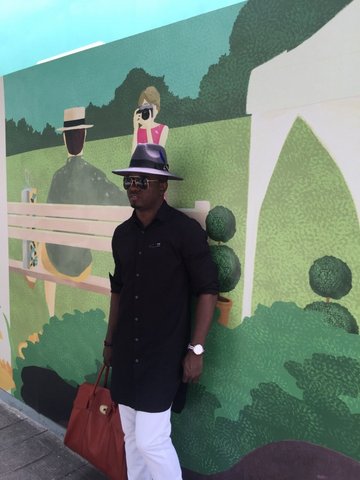 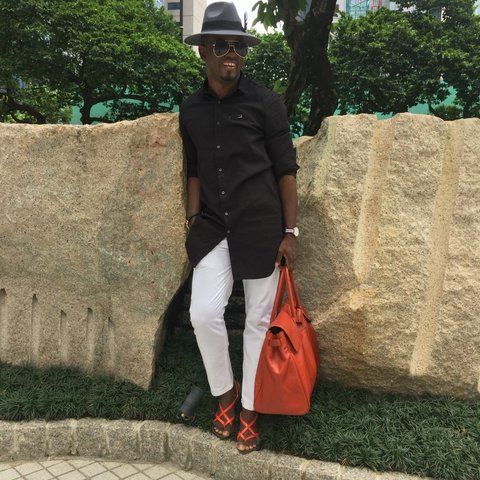 The thigh length shirt can be rocked with loafers or sandals, but I chose the latter for maximum comfort as I sail through the streets clutching my man bag.

There goes that African man again. Keeping the sandals and bag but switching up the rest of the ensemble. Black pants and a light brown semi-traditional shirt. The cap returns to the scene accompanied by the red neck beads. Make way……..he’s a casual man, but he’s native royalty. 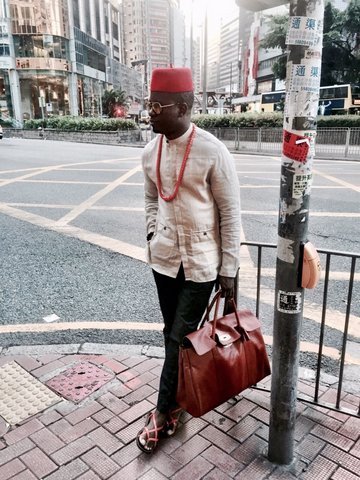 And now it is time to be the business on the world famous Finance street where most of the financial giants like HSBC and IFC births . A Navy Ouch double breasted suit sounds the alarm, there’s a business man about the town. Brown leather shoes and man-bag favour the look of a man of action, but don’t forget, you are a happy man of passion, so bring on the colours,….tie Game on Fleek. 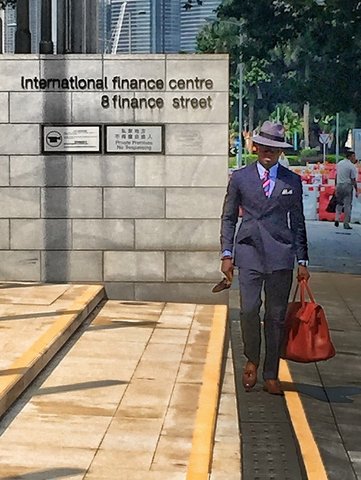 Discussing Fashion Business on the stairway but looking straight outta the runway. 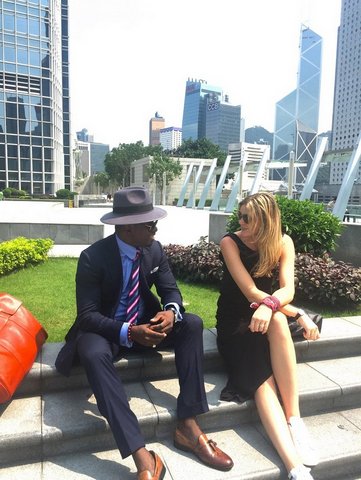 Making a delivery at the other side of town. For the train ride, whip out the sea blue pants and step in the black Ouch shoes. #BrandedMan 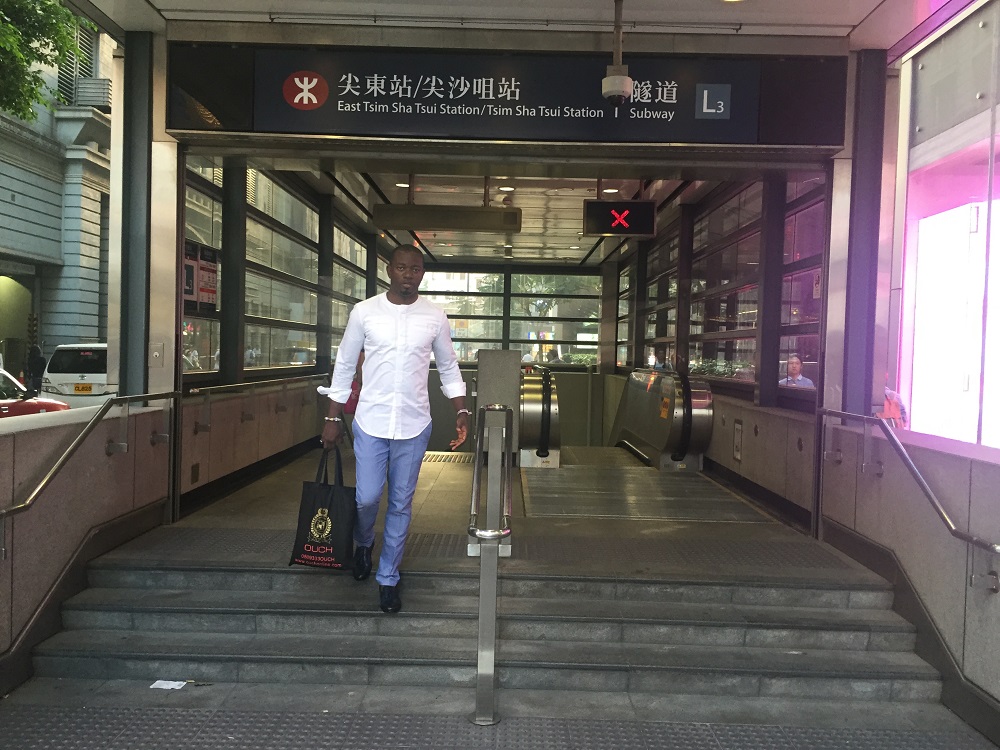 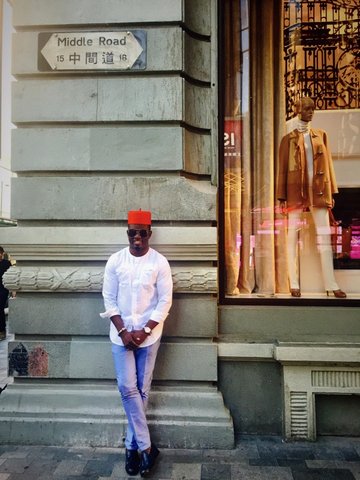 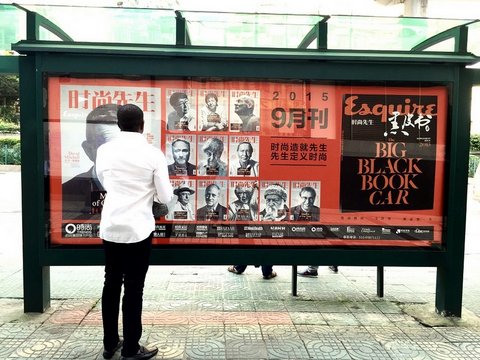 Get back into the groove. Neither casual nor businesslike. Simply Satorial with a fellow tourist. Japan meets Africa in central Hong Kong. 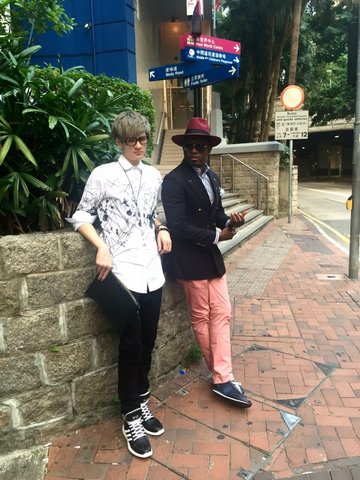 A fashionista type of day in the dark Ouch blazer and sea blue shirt. Feeling lucky……..and feeling brave, so the peach pants are out to play. Meet the neighbors and socialize!

On some bright days, dress as if life put a brush in your hand and said…….paint me!!! 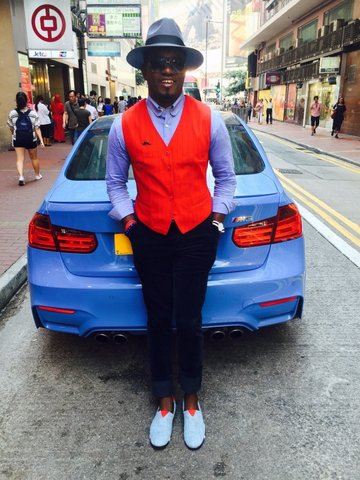 Live from the fashion Walk Avenue in Coarseway Bay

Wrap up the tour with a final sartorial statement. Blue Ouch shirt and Grey Libero are a safe combo with no loss of class, so to blend with the oriental flow of the city, throw in some color. I settled for the Red Ouch waistcoat. You guys ready for the shot? Click!……… Xie Xie Hong Kongers!!! 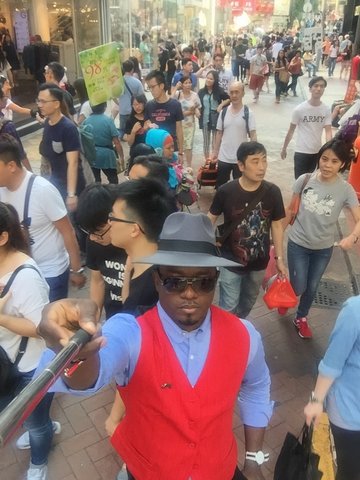 22 Celebrities Who Absolutely Slayed the Denim on Denim Look