The LVMH Award finalist and Future Award winner with an uncanny understanding of youth culture, a deep-seeded passion for diversity created easy, ready-to-wear androgynous pieces that make a profound political and cultural statement for the Nigerian and global community. Since he was 10 and learning to sew to launching Orange Culture in 2011, he has catapulted his cult brand into the centre of modern pop culture, making it one of the most influential brands of 21st century Africa. In this interview with YNaija’s UK correspondent, Rachel Ogbu, Oke-Lawal breaks down the DNA of the music and fashion collaboration and reveals future plans for his brand.

Q: What exactly is the agenda for today?
Oke-Lawal: Today basically is the launch day introducing the collection into the store and for people to meet me – the designer, to meet the artist – Davido (David Adeleke) and DJ Cuppy is playing so there’s going to be good music as well. It’s just a day to come chill with us. 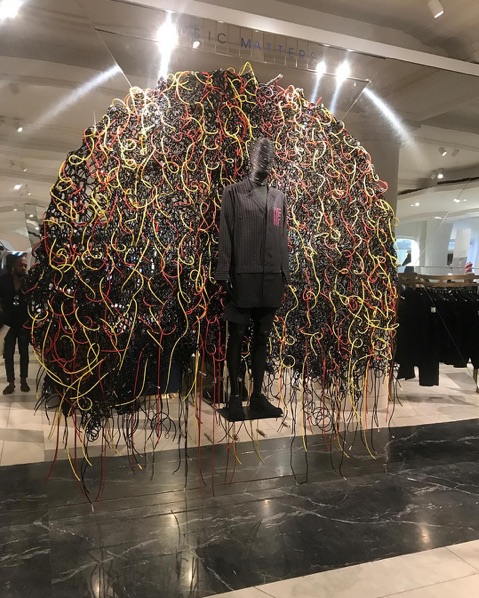 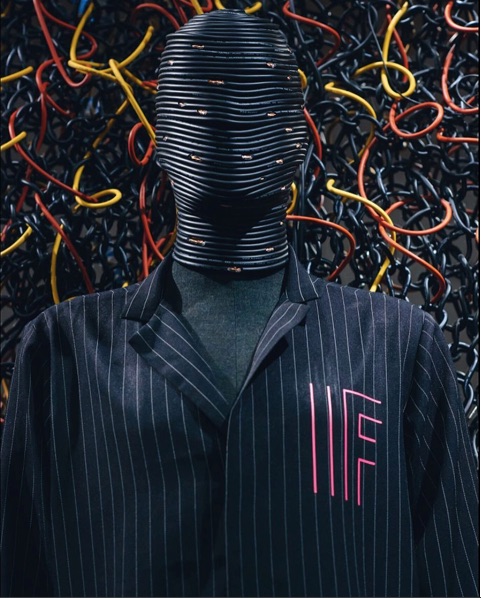 Q: Chill, I like to chill. But how chilled was it though coming up with this collection and working with Davido?
Oke-Lawal: (Laughs) It was not chilled preparing but it’s chilled now. Of course, it was a bit tedious but we are here now which is what really matters.

Q: How long did it take you to come up with this collection?
Oke-Lawal: It is a capsule so it didn’t take as long as a full collection.

Q: How many pieces make up this capsule collection?
Oke-Lawal: It’s about 11 styles, so 11 actual pieces, not looks and so it’s a lot easier to kind of work around that. We just took a lot of back focus, we had to design with David and make sure he is comfortable with it and also work the designs with Selfridges and also make sure they were comfortable with that as well. The back and forth took a little longer than usual but it was better to work like that so we make sure everyone was satisfied. Q: And for the customers, tell us a little about how we can incorporate these pieces into our wardrobe?
Oke-Lawal: They are supposed to be workable for everyday wear. You can wear each piece separately or pair them up. Because David’s style is very chilled and relaxed when he is travelling, or performing, we wanted to give him stuff that he would actually wear and not just stuff that looked nice on paper.

Q: How did all teams settle on the word “IF” as the backbone of the collection – obviously we know it is the title of one of his hit songs but what narrowed it down out of all the other choices and hits he has?
Oke-Lawal: That is one of the biggest songs of his career and it has been trending for months now. It is very relevant and the word itself is full of possibilities.

Q: Funny on my way here, I was imagining so many other lines from the song splattered across fabric especially the one that goes…“30 billion for your account”, however, this is an approving surprise that you’ve kept it neat, classy with a colourful edge.
Oke-Lawal: We wanted it to be versatile and work across the world. The thing is that we didn’t want to use words or phrases that would put it in a box. You know sometimes if you put Yoruba words, then only Nigerians can connect- then you ask why is it in a global store. We wanted to create something that millions around the world will connect with even if they don’t know the song – you know like ask… IF What? Q: Already today you are almost sold out and it’s just the launch – who do you think is buying the merchandise?
Oke-Lawal: I can tell you that everyone is appreciating and loving it, even people who have never heard of the brand before. The possibilities of IF makes it attractive to everyone.

Q: Yes indeed, slogans have been big this year and we’ve seen words both political and pop culture oriented splattered across the major runways. How do you see this collaboration fit into the global market?
Oke-Lawal: Yes the whole graphic print idea works because people love the idea of having something that talks before you speak.

Q: It’s one thing for a designer to get a magnificent gig like this, Selfridges is the global platform for creators, Davido is also fast becoming a worldwide music powerhouse but how do you make sure that partnering with them still fits into the DNA of your label, Orange Culture.
Oke-Lawal: Yes, of course, it has to fit in and it does because Orange Culture is a brand that is dynamic and thrives on continuously pushing its boundaries even with just the simple things. We’ve made sure that every piece has that little DNA that makes it Orange Culture sometimes it’s not even noticeable to people at first. Q: Brilliant! You mean like the hidden Mickey in every Disney animation?
Oke-Lawal: Haha! I guess you can say that. I mean take the blazer, for example, the way it is cut at the collar, that is a feminine cut but if you see it normally, you wouldn’t know it is actually an androgynous cut. So we kind of went with mixing little androgynous details into the pieces – also like the jacket, it’s in the way we lined it and the back patches. David wanted something simple, we also wanted something simple and still us, so we took things that worked for him and took things that worked for us and just merged it to create this production.

Q: I mean I love the stripy blazer with a faux layering effect beneath and the word IF in pink lettering on the chest.
Oke-Lawal: Yes that’s my favourite look as well- (lowers his voice) You know that one was actually designed so girls could wear it. It is a very interesting piece.

Q: Ah lovely! because the collection is based on the menswear floor, it’s good to know we girls can come up here and steal a few pieces too.
Oke-Lawal: Oh yes, we think of everyone when we make clothes. Of course, guys would wear it as well. We always want people to know women also wear Orange Culture and that’s fine, no one should stop a girl from wearing clothes.

Q: Let’s talk fabric now. The label says made in Nigeria which is a huge deal for Nigerians right now both politically and economically in buying locally made goods. How hard was it to get the right fabric and colour to use?
Oke-Lawal: It actually took quite some time. For the colours, all the letterings are in pink and that took time as well because we wanted to get the right shade – you know getting the pink that works right for David and works right for the global man and that’s why the pink is in the details and not the actual pieces. There are some men who might be reserved to wear something in striking pink like that but if you put it in a subtle way, more people are willing to try it and then gradually they become more open to one day wearing something entirely pink.

Q: Exactly, Exactly, I think we are ready for it, bring it on. With this success at the launch, surely you must be thinking about making Selfridges home. What next is on the line for Orange Culture here at Selfridges?
Oke-Lawal: Well, hopefully, in season collections will then be here at Selfridges – so after the capsule collection, we would like to see how we can bring in Orange Culture depending on how people react to this.

Q: It is affordable and trendy, I think people will react well to that.
Oke-Lawal: Yes indeed. Some people think we are extremely expensive but we are actually not that expensive. We are a mid-range brand somewhere in-between luxury designer high end and high street and if we ever price at let’s say, £200, you would feel and see why we have priced it that way.

Q: After London, where is your next stop?
Oke-Lawal: Lagos Fashion and Design Week and then another capsule collection. Orange Culture Fashion: How Its Shaping Our World With Its Gender Neutral Identity