Only about 30% of black women use sunscreen today.

All warnings of UV rays exposure still go unnoticed even though there is a significant rise of dark skinned women having skin cancer.

A document released in 2010, showed the Cancer Association of South Africa (CANSA) urging all South Africans to be SunSmart. This warning was to reduce the high incidence of skin cancer in the country.

Skin cancer is the most common cancer in South Africa with about 20 000 reported cases every year and 700 deaths. There is an argument that most dark skinned people stand at high risk because they are unaware of the effects on their skin until it is too late.

The World Health Organisation (WHO) reports that between two and three million non-melanoma skin cancers and approximately 132 000 malignant melanomas occur globally every year.

South Africa has the second highest incidence of skin cancer in the world after Australia. The good news is that skin cancer can be prevented by respecting the sun.

Another reason black people go undiagnosed early is that they are more likely to get cancer in inconspicuous places. Melanoma is most likely found on the palms, the soles, under the nails, a genetic mutation unique to black people.

“Right now it is unclear whether melanoma is more deadly in people of colour because there is a biological difference, or if they are getting different or less timely treatment than other patients,” Bordeaux said.

The most common set back is that many black women still believe their dark skin made them immune to UV rays and the melanin acted as a natural SPF.

Experts agree that though melanin does offer some protection from UV rays, it’s never enough. It is proven that dark skin has a percentage of SPF of about 10 however the approved level is wearing SPF 30 daily over the skin.

And then the few who go out to buy sunscreen complain about its outlook. Mineral sunscreen contains zinc oxide and titanium dioxide leave skin looking off-white and ashy. This never blends with darker skin tones and is off-putting.

“The best sun protection is the kind you use regularly. But if you don’t like the product, you are not going to put it on your skin,” Chidozie points out. “We try to make it easy to fall in love without products. It contains chemical filters, but it’s also moisturising without leaving your face shiny or sticky.

“There’s an issue with education around sunscreen in the Black community. Even though skin cancer doesn’t affect people of colour as much as it affects people with white skin, that makes it more dangerous because it’s often not caught until it’s in an advanced stage,” said Chidozie. “If you toast white and wheat bread, they both get burned. One just takes a longer time to show results.”

Bolden sunblock is moisturiser based with SPF 30 and Vitamin C and will dry clear on the skin. 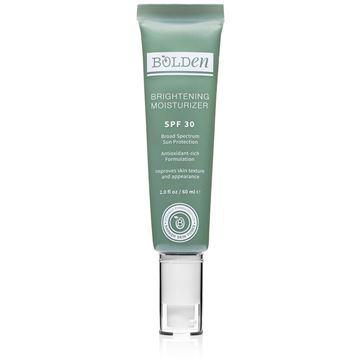 Who Will Be Crowned Miss Africa Great Britain 2018? Meet The Finalists

Does the SPF in your makeup really protect you from the sun?