Hullo Ladies, (Click here if you missed the warm welcome)

Have you ever wondered about wedding day traditions? You know, such as why we “tie the knot” or why bridal gowns are mostly white (and seriously no! it’s really not about being “pure”)? Today I want to shed more light on the most common wedding folklore. Enjoy!

Now we African women have taken to the white man’s tradition of the most elegant white wedding complete with a stunning white dress, a bouquet of flowers and some pretty bridesmaids. But have you ever wondered how all these things came to be? Come to think of it, why do we even have weddings at all? The actual word comes from the Anglo-Saxon ‘wed’ literally meaning the purchase of a bride, invented back in the day when marriage was little more than a business arrangement. Today of course, the focus is love, with a man and a woman making a public declaration of their love, unity and exclusivity. These are the most common traditions that have been carried down through generations. 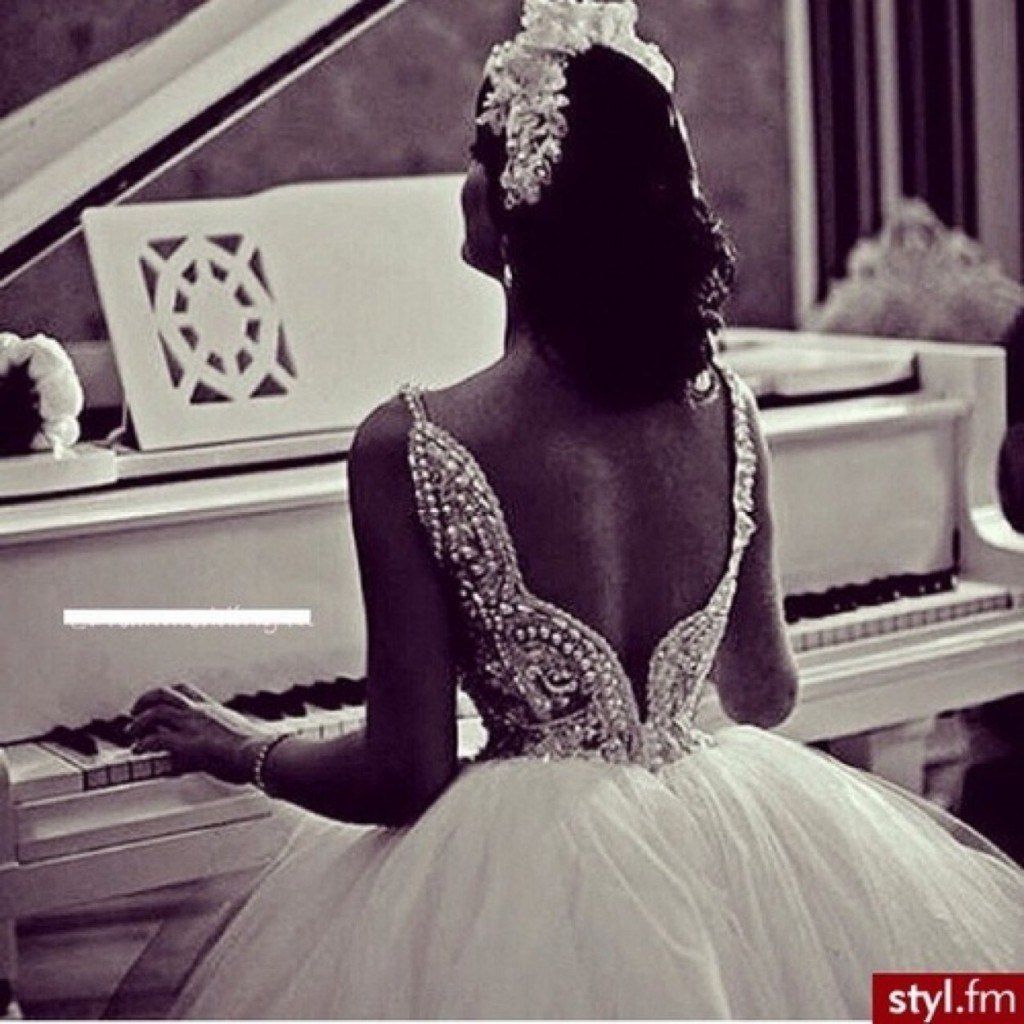 Knots feature in wedding ceremonies spanning many cultures from around the world, but some historians believe that the origin of the expression “tying the knot” could be the marriage bed. Long before the advent of metal bed frames, beds were held together with the knots – the theory being that you needed to tie knots to make your marriage bed. That being said, even in Roman times, knots featured in weddings, with the bride wearing one on the sash of her dress. In 1811, writer Francis Grose suggested that tying the knot had an altogether different meaning. “He has tied a knot with his tongue that he cannot untie with his teeth”. If Francis Grose is suggesting, albeit sarcastically, that women wear the pants after they say “I do”, then hey! We’re all for it…

PUTTING A RING ON IT

Back in Roman times, iron rings were placed on women’s fingers to signify ownership, and the Romans believed the vein on the third finger of the left hand ran straight to the heart, hence the ‘ring finger’ we use today. It was Pope Innocent III, in 1215, who officially acknowledged a period of betrothal prior to matrimony: then the diamond ring came later, when King Maximillian I of Burgundy popped the question to Mary in the 1400s with a diamond to seal the deal (he was definitely a keeper *wink wink*). The circle is now, as it was then, a symbol of infinity since it has no open ends and cannot be broken.

….AND SHE WILL BE WHITE

It was Queen Victoria, British monarch and fashionista of her time, who opted for a white gown, complete with a lace train, for 1840 wedding- despite silver being the then colour of royal weddings. And from then on, the tradition of white and weddings seemed to, well, marry. White became the traditional colour, and women no longer simply picked their best dress for the occasion. It was then around the 1920s that white dresses became synonymous with virginity- a notion that is often alluded to, although largely disregarded today. 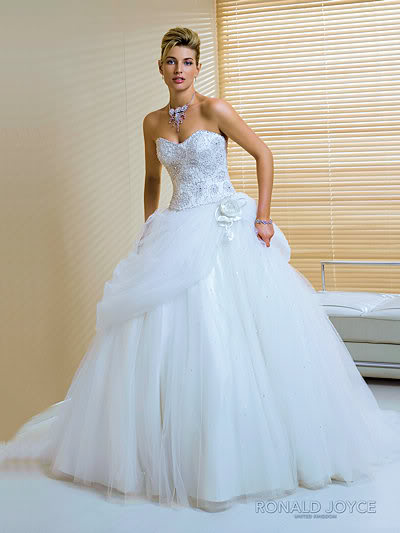 We’ve come to believe the purpose of the veil was as a symbol of the groom taking possession; the bride’s father would lift the veil to present her to her new husband for his approval- sort of like “surprise”!! But then as far back Roman times, there is also evidence that flame coloured veils were used as a measure to protect the bride from evil spirits. The spirits would be confused if they were not able to see the bride’s face. The veil is also seen in medieval times, as a sign of modesty and chastity, an idea that carried through to Victorian times and beyond. These days, the use of a veil is primarily at the bride’s discretion, and the decision is largely fashion-led, since veils come in all shapes and sizes today. 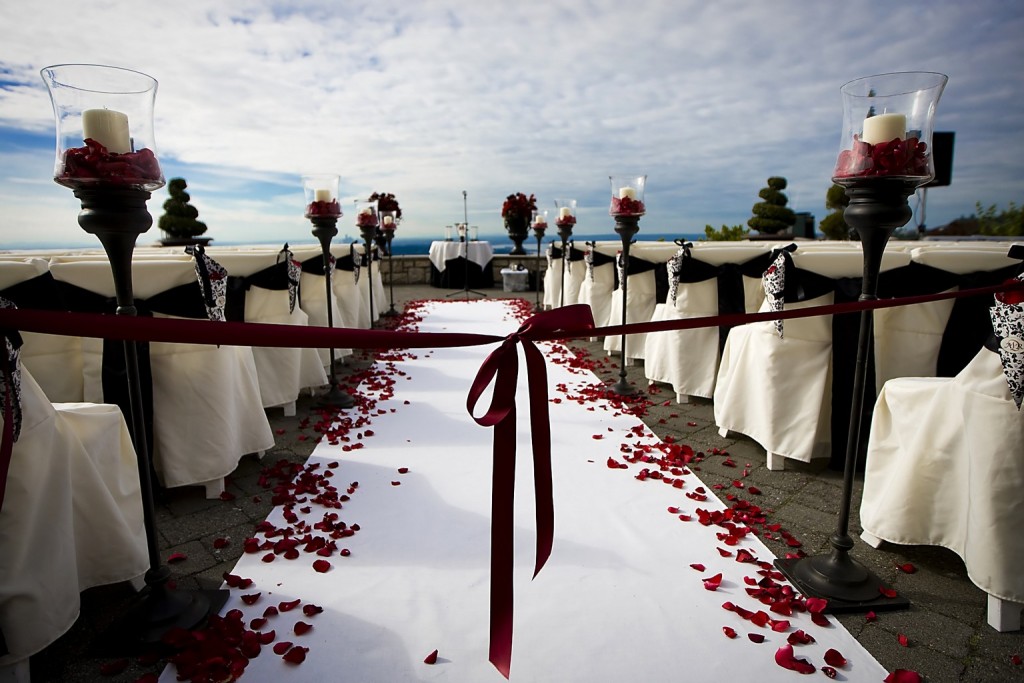 WALKING DOWN THE AISLE 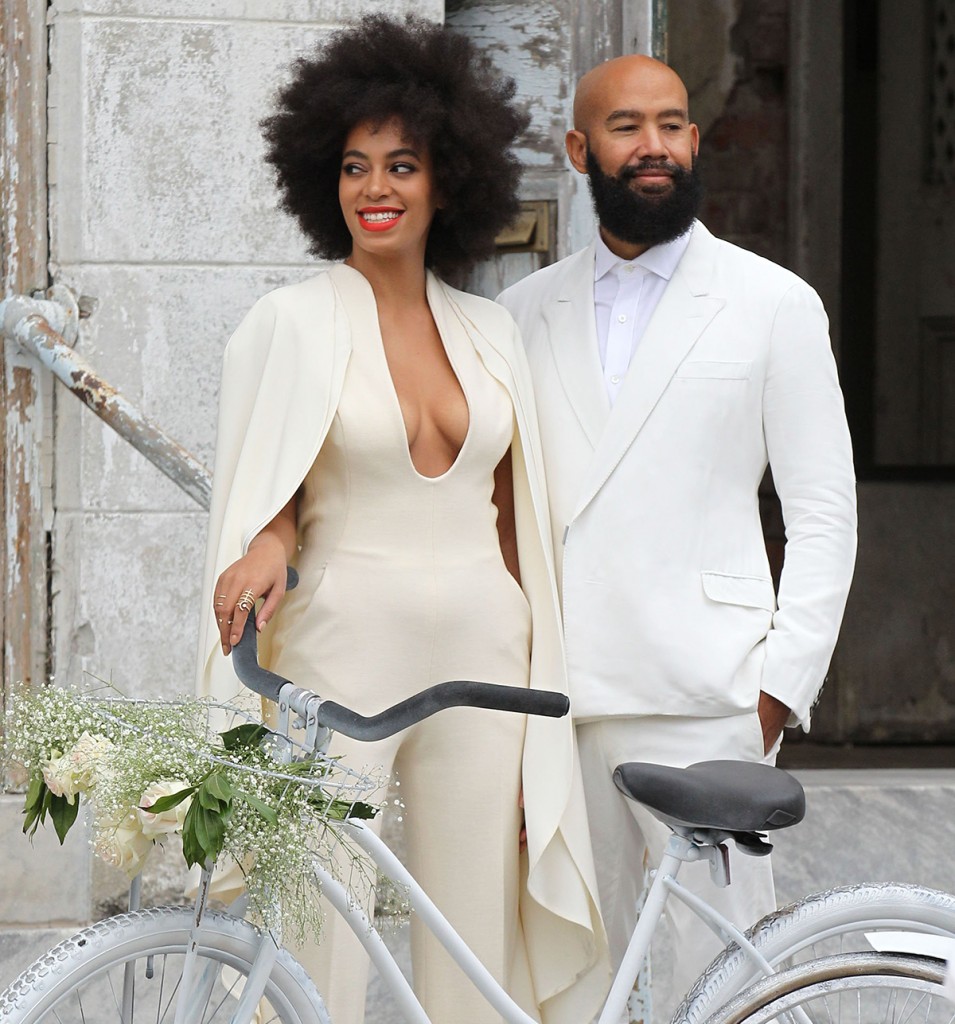 The wedding bouquet is one of the most important considerations for a bride in terms of theme and overall bridal look. Yet, the origin of the bouquet is far from romantic. According to some historians, flowers were used to mask the smell of… wait for it… body odour! Because in the 1400s people only bathed once a year (just imagine the funk!!!) For this reason, the bulk of weddings tended to take place in June- because May was annual bath month. Before the use of pretty smelling blooms, brides carried the not-so-fragrant garlic and dill, a practice that originated from the great plague, when people carried herbs close to their noses in a bid to avoid infection. Romantic? I certainly think not! 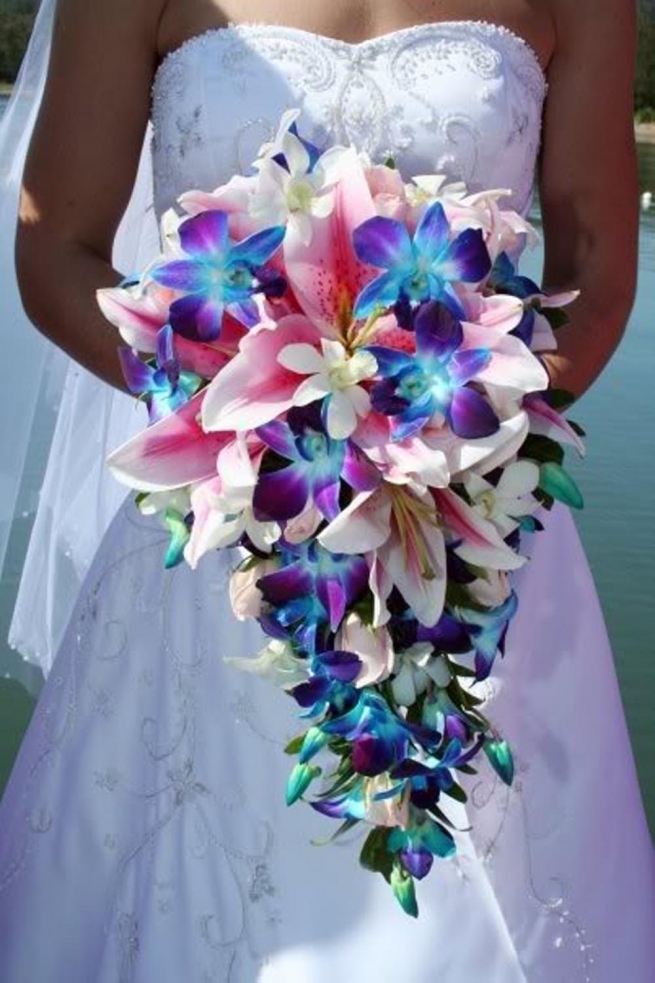 This particular tradition may not be common in these parts (Africa) but all over the world where a white wedding is celebrated especially in Europe and the States, it is an essential part of tradition. For those of you who are familiar with this aspect of a wedding or a bride’s to-do-list, you’d be interested to know that the tradition came from a Victorian rhyme, dating back to 1883: ‘Something Olde, Something New, Something Borrowed, Something Blue, a Silver Sixpence in Her Shoe: something old represents continuity; something new, the future; something borrowed symbolises borrowed happiness( this one is a tad sketchy for me though because don’t you return things that are borrowed?….hmm) and something blue represents luck. The sixpence- which is not so practical in a modern day pair of sparkly Louboutins- was thought to bring prosperity.

In the Ancient Roman tradition, bread was broken on the head of the bride to symbolise fertility. The tiers originated in medieval England thanks to a game in which couples kissed over taller and taller piles of cake which a French baker later covered with icing, to form the shape we know it as today. The Romans shared the cake to symbolise togetherness. In the past, the top tier of the cake was kept to eat at the christening of the couple’s first child, but now many keep the cake to enjoy on their first anniversary. Really, anything goes when it comes to the cake now.

Today the primary role of the bridesmaids is to support the bride in planning and to attend to her on her special day, whether it is providing tissues or touching up her lipstick. Second would be to look cute of course. However the origin of the role is slightly more sinister- in the past, the purpose of the bridal party was to fool evil spirits, and prevent them from attacking the bride. Bridesmaids would dress in exactly the same outfit as the bride in order to make those nasty spirits all the more confused. Plus they’d accompany the couple on their honeymoon! Now can you beat that! Lol.

It is thought that the actual ‘moon’ from the word honeymoon is from Old English tradition (derived from the word ‘hony moone’) which was when couples were given a month’s supply of honey-based drink mead after their marriage- sufficient enough for one cycle of the moon. It was thought the mead, (which was considered a powerful fertility booster) would help the bride conceive- sigh- well no pressure then…

THE HEN AND STAG NIGHTS

The hen and stag nights go way back further than you might think. The Spartans were the first to celebrate a groom’s last night of singledom with a raucous dinner, complete with toasts and a lot of wine. Originally, brides would spend a night alone prior to their wedding day, checking over their dowries. This slowly but surely evolved in to the idea of a bridal shower where gifts would be presented to the bride to help boost her dowry (although the latter is not necessarily the case today) It is widely believed that it was during the sexual revolution of the 1960s that the more raucous bachelorette party as we know it today, came into being.

THE GROOM MUST NOT SEE THE BRIDE

In the dowry days, when couples met on the day, the grooms who spotted their brides beforehand often turned and fled. The custom was brought in as insurance for the bride’s father, since the groom was less likely to escape if he didn’t catch a glimpse of his wife-to-be. These days, most brides and grooms remain separate the night before and meet for the first time at the bottom of the aisle in something of a “wow” moment.

Carrying Over the Threshold:

Roman grooms carried their brides over the threshold to protect them from evil spirits (the Romans sure were a superstitious lot weren’t they?) from lurking on the floor. 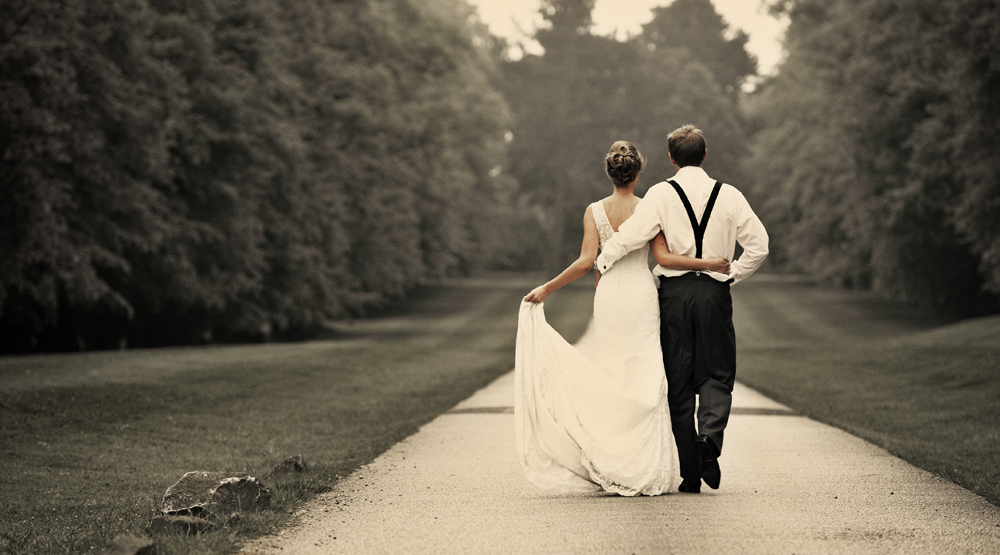 The Bride Stands to the Groom’s Left:

The bride stands to the groom’s left because in the days of old, the groom needed his right hand free to fight off other suitors.

The act of showering newlyweds goes back to the Romans who threw wheat/bread at brides for fertility – which evolved on to rice. These days, rose petals and paper(things less likely to blind you) are the norm. 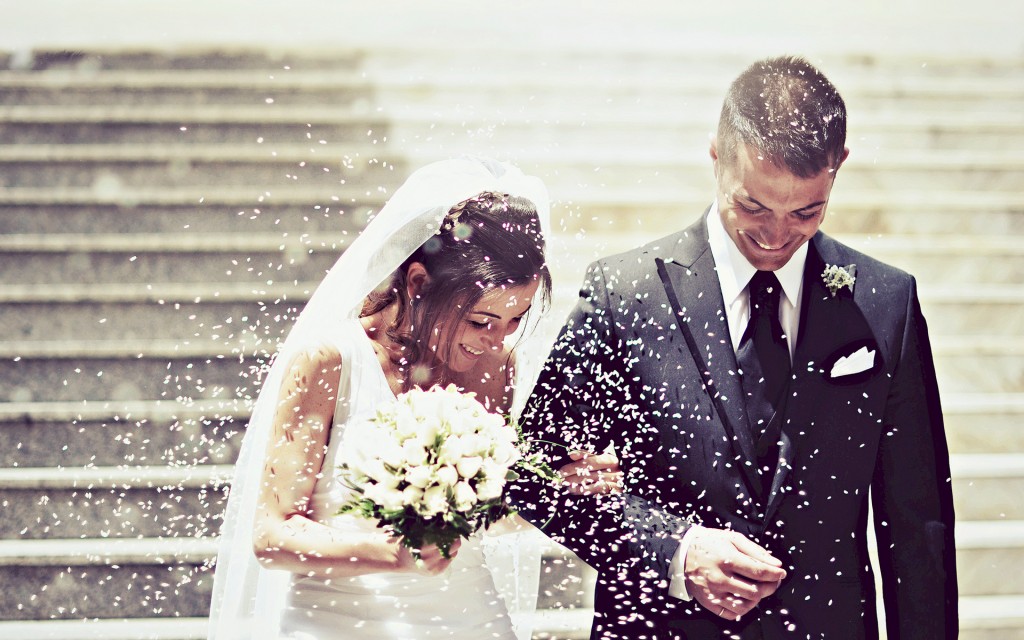 Again, it was the Romans, who gave couples fruit to symbolise fertility.

Tying Shoes to the Wedding Car:

This started with the Tudors, who threw shoes at the wedding carriage- it was good luck to hit the vehicle. Aluminium cans were introduced later in America.

Whether or not you think the origins of these aforementioned traditions are a bunch of boohockey, most weddings today aren’t complete without most of them. It is fun though to read through and think ‘Oh! Is that how it happened’ isn’t it?

What She Wore: Jennifer Lawrence in DIOR Couture For ‘Hunger Games Premier

With This Ring: A New Dimension To Wedding Invitations

With This Ring: Wedding Bouquet Ideas

With This Ring: 8 Subtle Ways To Show Off That Dazzler (Engagement Ring)