Abdominal fat is of particular concern because it’s a key player in a variety of health problems.Unlike fat parked on the hips and thighs, fat around the middle produces substances that can create serious health risks.

No matter what your body shape, excess fat isn’t good for your health. But saddlebags and ballooning bellies are not equivalent. When it comes to body fat, location counts, and each year brings new evidence that the fat lying deep within the abdomen is more perilous than the fat you can pinch with your fingers.

The remaining 10% — called visceral or intra-abdominal fat — lies out of reach, beneath the firm abdominal wall. It’s found in the spaces surrounding the liver, intestines, and other organs. It’s also stored in the omentum, an apron-like flap of tissue that lies under the belly muscles and blankets the intestines. The omentum gets harder and thicker as it fills with fat. Although visceral fat makes up only a small proportion of body fat, it’s a key player in a variety of health problems.The good news is that visceral fat yields fairly easily to exercise and diet, with benefits ranging from lower blood pressure to more favorable cholesterol levels.Visceral fat has been linked to metabolic disturbances and increased risk for cardiovascular disease and type 2 diabetes.  Even if you don’t actually gain weight, your waistline can grow by inches as visceral fat pushes out against the abdominal wall.

Visceral fat lies in the spaces between the abdominal organs and in an apron of tissue called the omentum. Subcutaneous fat is located between the skin and the outer abdominal wall. 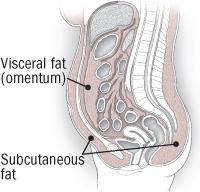 One reason excess visceral fat is so harmful could be its location near the portal vein, which carries blood from the intestinal area to the liver. Substances released by visceral fat, including free fatty acids, enter the portal vein and travel to the liver, where they can influence the production of blood lipids. Visceral fat is directly linked with higher total cholesterol and LDL (bad) cholesterol, lower HDL (good) cholesterol, and insulin resistance.

Insulin resistance means that your body’s muscle and liver cells don’t respond adequately to normal levels of insulin, the pancreatic hormone that carries glucose into the body’s cells. Glucose levels in the blood rise, heightening the risk for diabetes.

So what can we do about tubby tummies?

The starting point for bringing weight under control, in general, and combating abdominal fat, in particular, is regular moderate-intensity physical activity at least 30 minutes per day (and perhaps up to 60 minutes per day) to control weight. Strength training (exercising with weights) may also help fight abdominal fat. Spot exercising, such as doing sit-ups, can tighten abdominal muscles, but it won’t get at visceral fat.

A tape measure is your best home option for keeping tabs on visceral fat. Measure your waistline at the level of the navel — not at the narrowest part of the torso — and always measure in the same place. (According to official guidelines, the bottom of the tape measure should be level with the top of the right hip bone, or ilium — see the illustration — at the point where the ilium intersects a line dropped vertically from the center of the armpit.) Don’t suck in your gut or pull the tape tight enough to compress the area. In women, a waist circumference of 35 inches or larger is generally considered a sign of excess visceral fat, but that may not apply if your overall body size is large. Rather than focus on a single reading or absolute cut-off, keep an eye on whether your waist is growing (are your pants getting snug at the waist?). That should give you a good idea of whether you’re gaining unhealthy visceral fat. 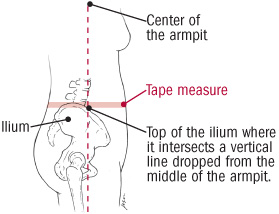 Where you tend to gain fat depends on your genes, your hormones, your age, your birth weight (smaller babies more readily add belly fat later in life), and whether you’ve had children (women who have given birth tend to develop more visceral fat than women who haven’t).
As young adults, women on average have less visceral fat than men, but that changes with menopause. But there are several ways you can minimize the accumulation of visceral fat. The good news is that because it’s more readily metabolized into fatty acids, it responds more efficiently to diet and exercise than fat on the hips and thighs. Here are some approaches that may help:
Keep moving. Exercise can help reduce your waist circumference. Even if you don’t lose weight, you lose visceral fat and gain muscle mass. Engage in at least 30 minutes of moderate-intensity activity most days, such as brisk walking or bicycling at a casual pace.  visceral fat can be prevented  with both aerobic activity (such as brisk walking) and strength training (exercising with weights). Spot exercises, such as sit-ups, can tighten abdominal muscles but won’t get at visceral fat.
Eat right. Choose a balanced diet that helps you achieve and maintain a healthy weight. . Avoid products that seem to encourage belly fat deposition, including trans fats (hydrogenated vegetable oils) and fructose-sweetened foods and beverages.
Don’t smoke. The more you smoke, the more likely you are to store fat in your abdomen rather than on your hips and thighs.
Get your sleep. Too little is bad.But too much isn’t good, either
Mind your mood. Higher levels of the stress hormone cortisol were associated with a buildup of visceral fat even in lean women.
Forget the quick fix. Liposuction for cosmetic fat removal doesn’t reach inside the abdominal wall.

Magic meets comedy: Bride makes her husband FLOAT above the floor during their first dance

TSS Fitfam: 5 Things To Do To Help Boost Metabolism

#Fitfam With Michelle: Fasting and Weightloss